Memory of Water at Shakespeare & Company 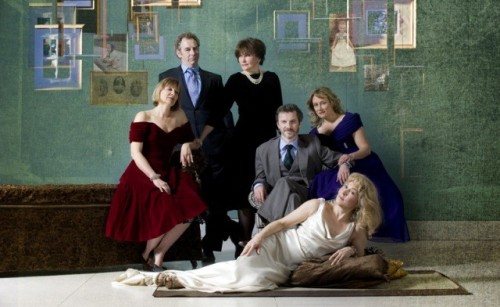 The brilliant and at times hilarious cast of The Memory of Water. Kevin Sprague photo. 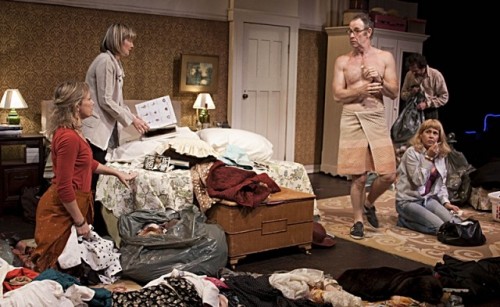 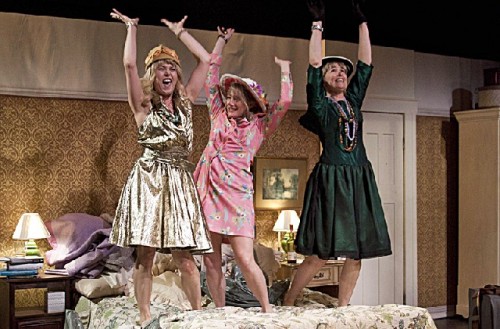 Oh my Mama Mia how girls just want to have fun even at funerals. 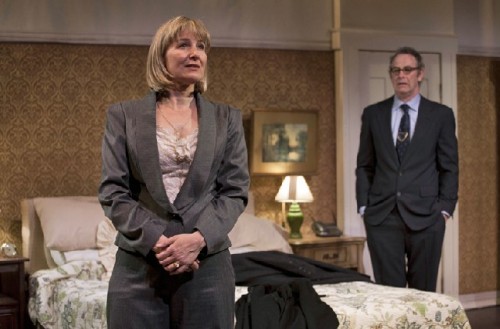 The production of The Memory of Water by Shelagh Stephenson, directed by Kevin G. Coleman, yet again reveals the remarkable depth and diversity of the classically trained actors of Shakespeare & Company.

The great delight of attending year after year of performances is the pleasure of experiencing how the players are cast and adapt to a wide range of productions from Shakespeare to contemporary plays.

Using the enticing analogy of water, however, this rather long evening in two acts ebbs and flows. There are hilarious highlights and poignant scenes but too often, well, the tide runs out and our attention span with it.

This is a play written by a woman and mostly about and for women.

Not in and of itself a bad idea.

Although the wonderful male actors, Nigel Gore (Mike),  as the adulterous partner of Corinna May (Mary), and Jason Asprey (Frank) as an exasperated husband of the ditsy, holistic herbalist Kristin Wold (Teresa) seem to be in every sense neutered. The bitches are off the leash snarling and frothing while the subdued studs have been fixed. So this play ends up as more of a dog than a pony show.

Mike, as the plot ensues, has indeed, literally been fixed. When his forty something partner Mary, a physician, informs him that she is pregnant he responds that it is not possible. He will stand by her no matter what but he has had a vasectomy. By, it seems, a surgeon in rehab who may possibly have botched the job.

Having been tracking Gore through Women of Will, where he has partnered and taken a back seat to Tina Packer, we were  looking forward to seeing him break out in a contemporary production. But it was ironic to yet again witness his subdued overly house broken response to the intensity, screed if you will (there’s that word again), of his mistress. He simply can’t abandon a wife with chronic fatigue syndrome.

The third sister Elizabeth Aspenlieder (Catherine) is yet again total gonzo and delightfully, hilariously over the top as a vulgar, man hungry, slut. She tells us that she has slept with 76 men all of whom have abandoned her. During the run of this evening she leaps at the phone every time it rings to speak to the latest lover who, you guessed it, dumps her.

The three sisters, and their male partners (minus Catherine’s whom we never see) have gathered in their mother’s bedroom for the occasion of her funeral.

The first scene opens with the mother Anette Miller (Vi) at her vanity applying cheap cologne and copious makeup. We learn that she is quite dead but there is a dialogue with Mary who is using her bed. Vi will return and has a major scene at the end of the second act.

It seems that Vi has been a terrible mother but we are never sure why. Her character is alluded to and is the motive of the action but oddly enough never adequately fleshed out. Well, she is dead. So it is not a very animated role for Miller who makes the most of it in a surreal sequence.

Funerals do not bring out the best in us. Particularly in siblings who squabble and have never resolved a lifetime of animosity. Mary, who languishes in bed and just wants to sleep through it, has a solution. Booze. Hitting the sauce will ease the pain. Until Teresa, on a rampage of invective, proves to be a really nasty drunk. Frank is terrific as the spouse who tries to calm her down with wonderful insight and wit. It is a truly marvelous and understated performance.

Oh yes, the Scottish thing. This is supposed to transpire in the dead of winter in the Highlands. Surprised they didn’t write single malt and haggis into the dialogue. The actors all gamely take a crack at the Scottish accent but like that water thing it, well, it rolls in and rolls out. It would have been much more effective to relocate the setting to a miserable winter in Minnesota. In this drama the locale was fairly irrelevant.

Yes there were some hilarious moments. As when the sisters decide to go through Mom’s closets and divide the clothes between what to save and what to donate to charity in Zimbabwe. In a raucous romp they try on all of the old dresses with memories and comments. Even Mike gets tarted up a bit.

The first act ends at high tide with the three sisters stomping on Mom’s bed singing disco tunes. For a moment there I thought we were seeing a chorus of Mama Mia. It seems there’s not much difference between three sisters at a funeral and three women at a wedding. It’s a girl thing. Girls just want to have fun.

After that rousing end of act one it’s low tide again at the beginning of act two. What follows is a series of dramatic moments in which we learn of the deep conflicts of each of the sisters. As it slogged on, with some twists and turns, I found myself not really caring much for or about the characters. Despite at times stunning performances.

There was the pervasive bottom line conclusion that a really first rate cast, and truly game effort all around, was squandered on a poorly written, chaotic, second rate play. The fault lies with the choice of material. Some terrific comic moments, like Aspenlieder’s brilliant sight gags, were not enough to hold our attention through an evening that might have been reduced by a third.