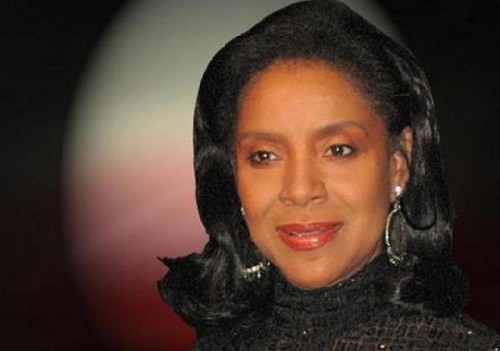 The marque name for this Broadway bound production is Phylicia Rashad. 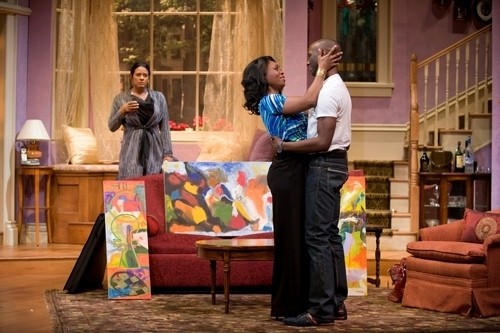 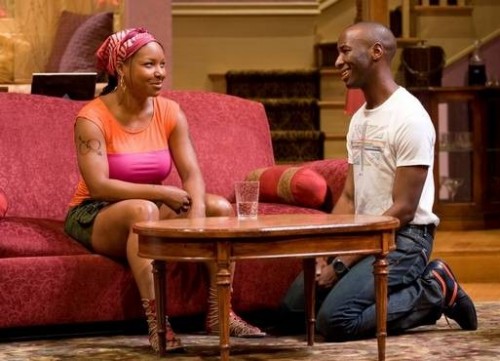 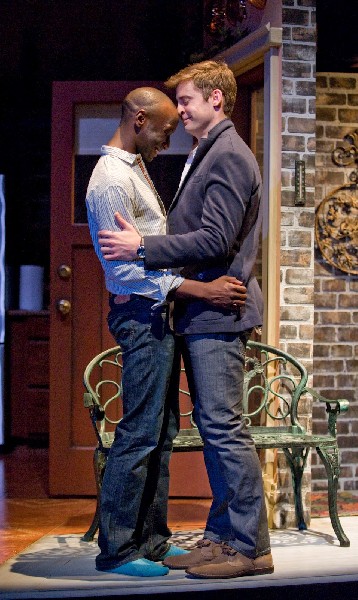 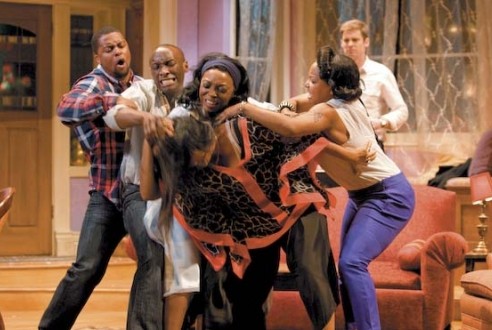 The puke flies in utter mayhem. 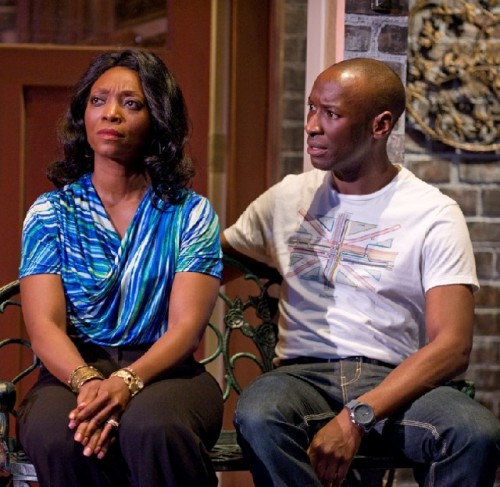 Evy and Jesse work through their differences.

Conforming to Aristotle’s paradigms for drama Immediate Family by Paul Oakley Stovall the action involving an African American family gathered for a wedding occurs at a furious pace with over the top histrionics, directed at warp speed by Phylicia Rashad, all in one day.

The drama/ comedy is presented at the Goodman Theatre in a special arrangement with the GLBT mandated, Chicago based, About Face Theatre Company. The production has been discussed in the media as Broadway bound in progress with space “rented” from the Goodman.

While the over the top volume and screeching energy level of the actors might be toned down a few notches one may well anticipate a successful run of this production, featuring a talented, Chicago based cast, in New York. Either on or off Broadway remains to be seen. There are always too many new shows for too few stages.

Generally shows such as this featuring a cast of unknowns, like this years’ Tony winning, Clybourne Park, have a long tough grind making it to Broadway. Here the marquee name is Bill Cosby’s former TV wife, the amazingly versatile, Phylicia Rashad.

There is indeed that TV flavored populism in her direction of a tight little play touching on familiar but daunting issues that are often played for laughs where a bit more nuance and gravitas is called for. But her approach may well prove to be more attractive to audiences than critics.

We are presented with an evening of paradoxes and conundrums.

Start with the exquisite, Hyde Park interior, screamingly bourgeois, designed by John Iacovelli. We learn through dialogue that the deceased parents of the Bryant clan made the move from the tough South Side. But exactly how is never clear.

While the family is fiercely middle class their roots are never glossed over.

The siblings moved on but the tough, bitter and righteous Evy Bryant Jerome (Shanésia Davis) stayed home to care for aging parents. We learn that the family sacrificed to send the bright and talented Jesse Bryant, Jr. (Phillip James Brannon) to Howard University.

During the early stages of the play it was difficult to sort out the characters and their relationships. Evy was so rigid and domineering that initially we assumed that she was the mother of Tony (Kamal Angelo Bolden) who is about to marry his pregnant girlfriend.

It takes some time to realize that the stridently gay Nina Cole (J. Nicole Brooks) is indeed Not a member of the immediate family. She is a next door neighbor.

And what to make of Ronnie Hahn (Cynda Williams) who sweeps in claiming her “old room.” She unpacks a bag full of booze and starts by fixing a drink, or two, or three, or four. Until during an absurdist high or low point in the drama, depending upon your taste and viewpoint, she pukes her guts out in a scene of utter mayhem.

The barf hits the fan when Evy sharply points out that Ronnie, a half sister by a white mother, is Not a part of the Immediate Family. When she was a child her mother knocked on the door of the Bryant home and demanded recognition, denied, by her father.

Ronnie later showed up at his funeral balling her eyes out for the man she never knew. Clearly with lots of baggage she is now an artist with a white husband living in Belgium. She has brought some of her paintings as family presents.

When Ronnie proposes going out to party the decision is made instead to stay at home, with The Immediate Family, and play cards just like old times.

Of course there’s a complication. The closeted Jesse is gay. Hold on. There’s more. He’s engaged to a Scandinavian man Kristian Silborn (Patrick Sarb). The ruse is that he has invited his “friend” to shoot the wedding for free.

When Jesse outs himself to his brother Tony there is a comical reaction. Tony is not at all surprised to learn that Jesse is gay. Heck. Knew that all along. The shocker is that, good grief, he has hooked up with a White guy.

Kristian, immediately dubbed Kristine by Nina, arrives bearing gifts for his future in-laws. Why would the “wedding photographer” come with presents? Jesse has failed to inform the family, particularly the hard ass Evy, of their true relationship.

That becomes painfully clear when Evy sharply rejects his gesture of goodwill.

Understandably, Kristian is hurt and offended. There is a poignant private moment when he and Jesse debate their future. Kristian has decided to return home and spend the next year with his son. Hmm. Another plot twist.

The appearance of Kristian slows down the train wreck intensity. He has a different way of responding to adversity other than screaming and acting out.

As a successful dramatic device this emotional down shift also allows for a more subdued moment when Jesse lays the cards on the table and works through differences with Evy.

In terms of the arc of the drama it started way too high and then eased down to a low key ending. It is the reverse of the usual progression and occurs more by default than design.

Were we watching Rashad’s play on TV, her norm, we might opt to turn down the volume. On stage that’s not possible.

So, more or less, we grin, even laugh now and then, and bear it.

Bottom line: Before this play hits Broadway it needs to decide whether it’s TV or not TV.