Why Does God Let Bad Things Happen to Good People 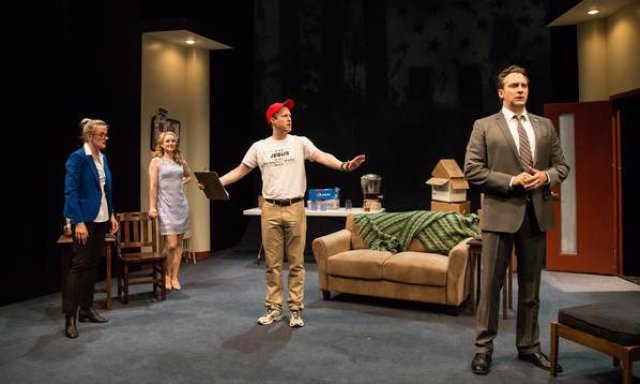 Just over an hour and ten minutes the play Church & State, by Jason Odell Williams and directed by his wife, Charlotte Cohn, is followed by talk backs planned for another thirty minutes. On opening night that stretched to forty minutes with the playwright and director.

With the topical content of school slaughters with assault rifles, and the questionable power of politics and prayer, the play will be staged in roughly half of the US through 2019.

The setting is Raleigh, North Carolina, just days before a nip-and-tuck election to the US Senate. In a purple state incumbent Charles Whitmore is a God fearing, second generation Senator, good old boy, and defender of gun rights. In a Tammy Wynette way his saccharine, platitudinous wife Sara (Judy Jerome) dutifully stands by her man. Until, that is, things start to fall apart. Then sugar sweet turns nasty fueled by lust, greed for power, and alcohol.

There has been a massacre in the school their kids attend. He has watched the burial of children of neighbors; victims their kids knew and played with.

A blog reporter asked the Senator if, during a time of grieving, he turned to God and the power of prayer. Caught off guard at an emotional moment he questions a God who could allow for endless incidents of the slaughter of children. Rather than useless prayer, and a moment of silence, he vows to take action and introduce legislation to end ownership of assault rifles.

That’s not what his base wants to hear.

After so much slaughter, however, doesn’t it make sense? It does mostly to Northern liberals like the playwright and his wife/ collaborator. He is a New Yorker and she was born in Israel.

In rural America, the South and Bible Belt blind faith and guns appear to be inseparable. When the Founding Fathers wrote the Second Amendment they were talking about muzzle loaded muskets not massive clips in rapid fire, assault rifles.

How can a benevolent and merciful, all knowing God allow bad things to happen to good people?  It is a question as old as The Book of Job. In The Bible his wife says “Curse God and die.” It was asked in the death camps of Nazi Germany. How could God allow the Holocaust for his chosen people? As Theodor Adorno wrote in 1951 “There can be no poetry after Auschwitz.”

After one too many school massacres, as Williams told us, in a rage he wrote a screed. With input from Cohn and others it took two and a half years to craft it as a play that balances issues, drama, and the relief of comedy.

That’s a part of the problem. In the attempt to be fair and balanced this is a dark comedy that really shouldn’t be funny. It evolves as a Judas goat luring an audience like cattle into an emotional slaughter house. What is referenced as background comes back as a reprieve just short of the Gettysburg Address. It is followed by a petering out, anti- climax. That reads as a bit confusing but I am trying to avoid spoilers.

As a trend in social justice theatre it is becoming formulaic to have theatre followed by discussion. There is an approach of treating play and talkback as a whole. As a critic it puts me in a tough spot. Most frequently I skip post mortems as it is the job of critics to make up their own minds about what they see.

That’s becoming ever more difficult.  With shrinking news rooms critics write previews and do interviews about plays they review. While problematic, there is a positive result when issues are vital, topics are complex, and the drama in question is excellent. There has to be the right balance.

It is the familiar conundrum of evaluating mediocre treatment of important issues. Or vital concerns treated poorly. The classic example of this is Triumph of the Will by documentary filmmaker Leni Riefenstahl. It is impossible to separate evaluating it as an iconic work of art from its role as propaganda for the Third Reich.

If only the work in question Church & State was better written and directed. The actors were effective given what they had to work with. There didn’t feel like sufficient gravitas for the deadly serious reversal which is the point of the play. The vacillating politician, manipulated by his wife, and sharply advised by the campaign manager, quite suddenly morphs into a character as monumental and heroic as Mt. Rushmore. Oh really?

As theatre I was less than inspired by the drama but swayed by the impact of the dialogue it provoked. Perhaps, in a critical evaluation they cannot be separated.

We assume that Sara is an airhead. Then she blurts out being a graduate of Chapel Hill while he attended NC State. Until then she had done a good job of downplaying her smarts. It’s what the wives of politicians are expected to do from Eleanor Roosevelt to Rosalynn Carter, Laura Bush, Hillary Clinton and Michelle Obama.

Then there is the stereotyping of the New York, liberal, Jewish campaign manager sharply portrayed by Keira Naughton as the tough strategist Alex Klein. Because she wears pants, brace yourself, Sara wrongly assumes that she is a lesbian. Despite a denial there is some doubt about her orientation. But no waffling that she hopes to ride Whitmore, a moderate Southern, Christian conservative to the Oval Office.

Williams tends to run gags into the ground. The blogger threatens to post his interview on line.  Much is made about how little the Whitmores, born again Luddites, know about social media.  How many laughs can you milk from calling it The Twitter rather than just Twitter. There is no joke when his angry remarks go viral. With spin and damage control he is advised to stick to a boiler plate speech and insist that his remarks were posted out of context. That’s the conventional wisdom.

The candidate has seemingly committed political suicide.  He is agnostic, scoffs at prayer, and determined to snatch assault rifles from God fearing patriots. In other words, clear headed and ready to do the right thing.

Days before the election he is determined to speak from his heart to the conservative base.  Sara and Alex sit on the couch for a heart-to-heart in the Green Room. On TV they will watch him go down in flames. Alex insists that Sara’s place is on the podium. By not putting her there the playwright has scripted a character flaw and setup for a cheesy reversal. That’s just not good writing.

That undermines her unearned celebration of an implausible reversal as he wins in a landslide. The contrived plot point is that 70% supported his moral stance while 30% now truly hate him.

In an early draft of the play “The Speech” appeared early on. By e mail a friend advised to save it for the end. The trick was how to do that. Nothing prepares us for that truly stunning and magnificent oration. Is there anyone in our current Congress with the moral compass to give that speech?

Laws are enacted by a Congress bought and paid for by the NRA.

Kids get killed and nothing happens. This play makes us think about that.