Play a Panoply of Vegas Types. 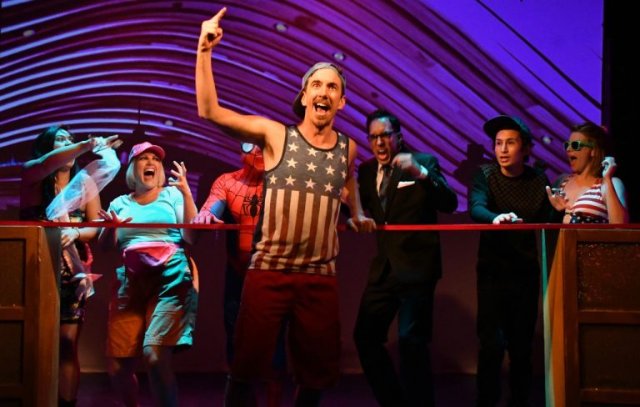 What is it that draws even sensible people to places like Las Vegas to risk their hard earned money on games of chance that are stacked against them? Some produce totally haphazard outcomes, such as roulette. In others such as poker, some factor of skill is present. But even drawing great cards may not be sufficient to win, as, with the exception of the exceedingly rare royal flush, each great hand can be bested.

Jonathan Spector’s world premiere Good, Better, Best, Bested depicts one night in the lives of a cluster of people in Las Vegas. With a serio-comic look at situations profound and mundane, the play is provocative, engaging, and well produced. That said, its narrative will not appeal to all, as it challenges our ability to extract thematic meaning from a kaleidoscope of episodes; its characters and situations are disparate; and some theater goers may not be able to weave together all of the loose ends to their satisfaction – this writer included. Not every sequence works well, but most do, and the overall product is interesting and worthy, if imperfect or perhaps unfinished.

We encounter a panoply of Vegas types. An engaging but bottom-end magician plies his trade in a nightclub but would rather be back home in Portland. A middle-aged man with little success in life tries to make ends meet as a mime busker. A lively bride-to-be parties with her raucous friends. A prostitute has an appointment with a recently widowed businessman. As these and other lives intersect, gambling addiction, past marriage, troubled parent-child relationship, and failed dreams are exposed. Most significantly, news of a distant but highly catastrophic incident changes the rules of engagement, but not necessarily in expected ways. How do a prostitute and her john proceed? Do a father and son continue to fight traffic to go out for sushi? The absurdity of these situations produce laughs as well as sober reflection.

So what binds this all together? One possible overarching theme that can be considered is the randomness of life and its consequences. As a gambling center, Las Vegas, with the random outcomes that it produces in many peoples’ lives is certainly an appropriate setting. Other incidents contribute to the notion that our lives are not totally under our control. Why are two conversations on stage carried on simultaneously when the listener could at best follow one of them? Why did the catastrophe occur where it did rather than elsewhere? Why did a couple who were to resettle at the site of the catastrophe end up in Cleveland instead? (There – you can eliminate Cleveland as the location of the catastrophe.) Even when the phrase “Where were you when…?” is spoken, it carries the suggestion that disaster could have easily struck where you were instead.

As an ensemble piece, participation among the performers is well spread. Remarkably, each performer acts his/her roles with able panache. But how do we attribute the fine acting that produces energetic, sometimes likeable and sometimes empathetic, characters? Is it director Lauren English’s guidance? Did her experience as a casting director lead her to making all of the right acting choices? Or do these actors simply have the chops to inhabit their multiple roles? In any case, it works, and kudos to Millie Brooks, Lauren Andrei Garcia, Tim Garcia, Mick Mize, Gabriel Montoya, Jessica Lea Risco, and David Sinaiko.

Custom Made’s modest digs would hardly seem right to represent Las Vegas’s massive proportions and gaudy excesses, but with the exception of the frenetic closing scene, the vignettes are intimate, and as appropriate, screen projections offer the needed backdrops. The look is enhanced by Sophia Craven’s formidable and nicely dispersed lighting and Brooke Jennings diverse costumes, while English orchestrates the whole adroitly.

Good, Better, Best, Bested by Jonathan Spector is produced by Custom Made Theatre and Just Theater and plays at 533 Sutter St., San Francisco, CA through July 7, 2018.