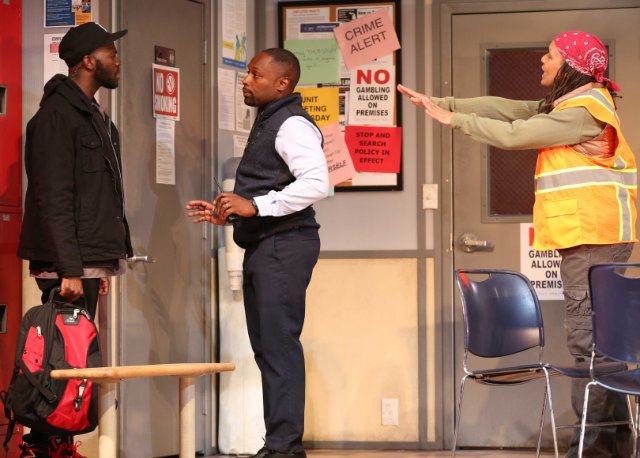 Skeleton Crew, the third play in Dominique Morriseau’s Detroit Trilogy is on stage at Westport Country Playhouse through July 22. It is set in 2008, during the great recession. It revolves around four employees of a Detroit stamping plant which produces parts for the automobile industry.

Rumors have it that the plant will be shut down.  The title refers to the employees who will be last to let go. They will maintain production until the closing.

Three are line workers. Faye has been there 29 years and wants to make it to 30 for a better severance package. She’s also the union steward and has had breast cancer. Her life is teetering on the brink of disaster. Shanita is a single, pregnant mother who needs the job and security it brings. Dez, is a good worker, but likes to challenge the rules. He is often late, has an attitude, and makes it hard on himself.

The fourth member of the cast is Reggie. He’s the manager who has made it upward from the line. He too is worried about the future as he and his wife have just bought a house. He is the go-between the higher up supervisors and the line workers. Often, he is caught in the middle with his loyalty to the people he knows in conflict with self-interest.

During the play’s two plus hours, we not only learn a lot about these people but about America's factory workers.

These are people trying to achieve. They work hard in jobs that are physically demanding. The production line doesn’t stop and breaks are few. Economically they are struggling. And they know that their futures are limited with endless days, weeks, months, and years of struggle. They have little hope, except for Reggie, of any major improvements. But he knows how tenuous his foothold on economic security is.

This was the last of the plays both in time period and when it was written. It seems that Skeleton Crew is less dependent on the influences of August Wilson and Lorraine Hansberry than the other works. Morrisseau seems more sure of herself in this work.

That doesn’t mean it is perfect. It could be tighter with less repetition. One of the central conflicts could  be clearer. That is the ethical conflict that Faye faces. Reggie has let on that the plant will be closing though no announcement has been made. As union steward, Faye should tell the union, but Reggie fears the company will know he leaked the information. That Faye keeps it quiet is a case of personal friendship over responsibility.

While I came to sympathize the characters and their dilemmas, the play lacks dramatic tension.

The structure of the play can also become tiresome; two people in the break room, then one leaves, another arrives, and so on.

The direction by LA Williams is crisp and he has melded the actors into a ensemble that play off each other. He has gotten fine performances from all of his cast. It is hard to single one actor out of the foursome; each is excellent.  Perri Gaffney is Faye, Toni Martin is Shaita, Leland Fowler is Dez and Sean Nelson in Reggie.

The sound design by Chris Lane and the original music by James Keys recreates the sound of a production line just outside the break room. It is one of the best things in this production. Caite Hevner’s scenic design creates a rundown employee break room complete with lockers and a beat up microwave.

As I was watching this work, I kept thinking of Lynn Nottage’s Pulitzer Prize winning play Sweat that has similar themes. That drama, set in a Pennsylvania bar where factory workers of a plant that may soon be shutting down or locking out its workers, did a better job of illuminating the issues and the stakes and the tensions among the employees.

Skeleton Crew is well worth seeing. It reveals a different world and we gain appreciation of the people who survive and their challenges.