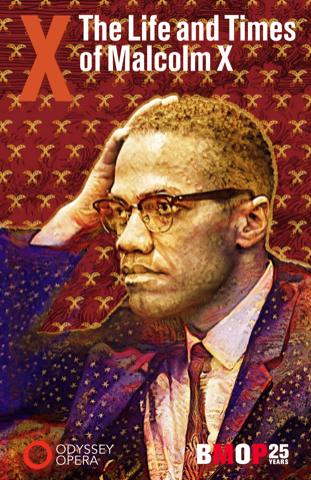 X: The Life and Times of Malcolm X Boston Modern Opera Project and Odyssey Opera at The StrandTheatre Dorchester, Mass. 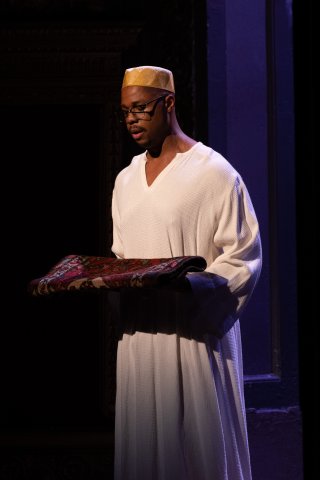 Davone Tines sings the title role in X: The Life and Times of Malcolm X by Anthony Davis Production photos by Kathy Wittman 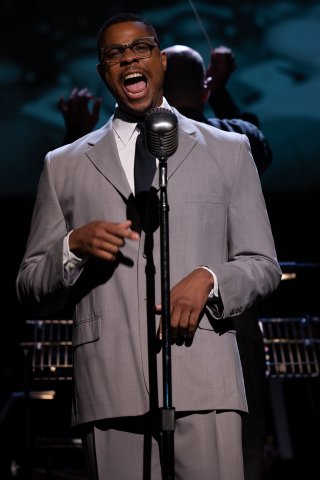 Davone Tines is a great bass baritone who fits the role of Malcolm perfectly. 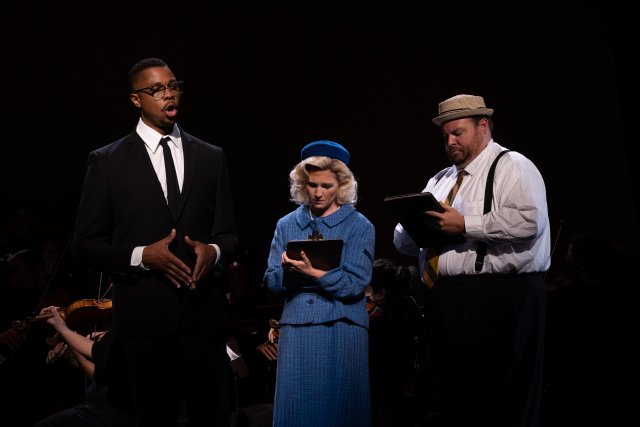 Davone Tines and ensemble in X: The Life and Times of Malcolm X 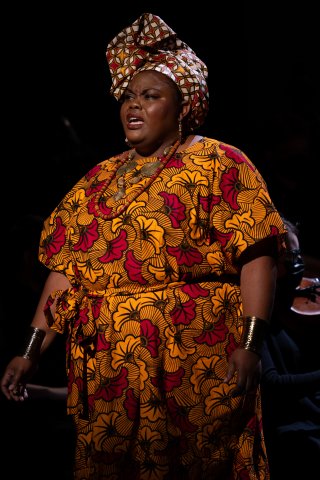 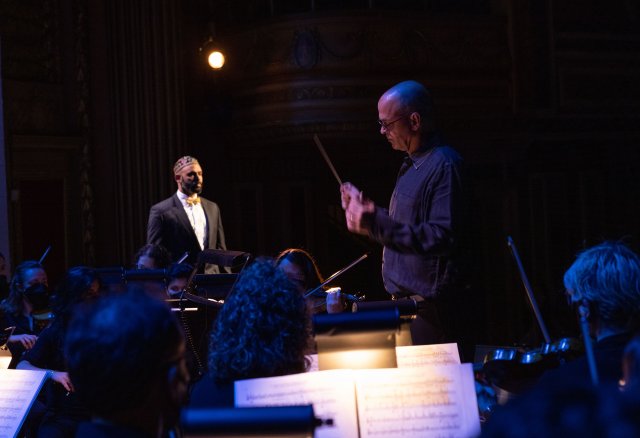 Gil Rose masterfully conducts the complex and satisfying score of X: The Life and Times of Malcolm X by Anthony Davis. 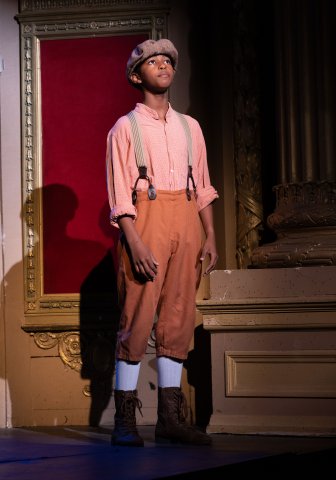 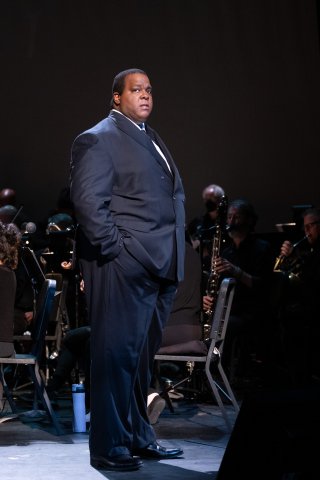 Joshua Conyers is Reginald, a commanding baritone who appeared in Carlos Simon's Night Trip for the Washington National Opera, and earlier this year as Reginald in Detroit.

Today, decades after it was written and first premiered at New York City Opera to sold-out houses,  X: The Life and Times of Malcolm X, feels both deeply rooted in the classic opera traditions of Wagner, Strauss and Berg and deeply connected to our jazz heritage. The work is as much Charlie Mingus as it is, let’s say, Parsifal, which composer Anthony Davis often references.

Davis is a graduate of Yale and taught music at Harvard where he befriended Henry Louis Gates who was in the audience at The Strand in Dorchester. Malcolm learned to navigate the streets and went to jail in south Boston. He learned about zoot suits there.

He noted: “Sky blue pants thirty inches in the knee and ankle-narrowed to fourteen inches at the bottom, and a long coat that pinched my waist and flared out below my knees.” Their purpose: to comment on the conservative and uniform dress of white men. White service men attacked black men who wore zoot suits on the streets. Their satiric parody was not appreciated.

Layered rhythms are used to create drama and tension,  Extending Wagnerian chromaticism to leaps in the voice and jamming notes in the orchestra are other tools deployed to create beauty or horror, depending on the emotions of the moment on stage. There is richness to Davis’ composition which far exceeds that of most contemporary opera composers. Techniques are so skillfully used that you are left absorbing the richness with a seamless awareness of the parts.

Davone Tines sings the title role. He made his mark in the premiere of John Adams' The Girls of the Golden West in 2017. He played Ned Peters, a black cowboy. His Frederick Douglass aria sung as a slave is a highlight of the opera.

Tines continues to ask Douglass' question: What to the slave is the fourth of July?

Tines explores his identity as a black man. At National Sawdust in Brooklyn he presented a choreographed work, Requiem for a Tuesday. It was designed to inspire mobilization against racial discrimination and police brutality.

The Black Clown, based on a Langston Hughes poem, was created by Tines. Like Lawrence Brownlee's compelling work Cycles of My Being, the central singing artist, in monologue, portrays what it is like to be black and male.

Eldridge Cleaver wrote from prison about the black male: development to manhood for young black men is the most intractable problem in our country.

In the Hughes'  poem, the poet presents himself as a clown, here to do his audiences' bidding. Tines takes on the role, at first speaking in mellifluous if embittered tones. Brownlee and Tines address their brothers, man to man. They also address us.

In X it would be difficult not to feel what is going on on stage. The evening's effect is cumulative. Action becomes more insistent and demanding as Malcolm struggles in song and orchestration to grasp his place in the world. Meeting with a Muslim in a Boston prison launched his political career.

Tines expressed a need to see men like him on stage and also to represent them. Malcolm X was waiting for him. At the Castleton Festival, he sang Otello as Paul Robeson once did.

Working with librettist Thulani Davis, composer Davis’ song music in the opera is often gathered about a phrase, which is tossed back and forth between the soloist and the chorus. “Africa for Africans,” “Betrayal is on his lips,” “Freedom, justice, equality” — again and again.

This may be a form of signifying. Music is traditionally a way to turn against white oppressors. The clumps of words also provide a bass beat, steady and sure. Those phrases are etched in us: “Africa for Africans,” “Betrayal is on his lips,” “Freedom, justice, equality.” Parody involves repetitions and also differences. Davis discovers new ways to get from one place to another.

The semi-staged production is immeasurably enhanced by projections designed by filmmaker John Oluwole Adekoje. He mixes photographs of the times manipulated to move with the music and shaped to the mood of the drama.

Gil Rose, an early supporter of composer Davis, conducted to both display the singing artists and to reveal the many facets of the score.

He is embarking on an 'As Told to Project' in which important operas of often overlooked artists will be produced.

Nkeiru Okoye’s “Harriet Tubman” will be shown in the premiere of the full orchestra version of the composer’s first opera.
Performance Date: Fall 2023
William Grant Still’s “Troubled Island” will be shown with BMOP partnering with New York City Opera. The work will be celebrating its 75th anniversary.
Performanace Date: 2024
Ulysses Kay’s “Frederick Douglass” will get its first performance since its world premiere.
Performance Date: 2025
Jonathan Bailey Holland’s “The Bridge” will end the series. The opera, which will have its world premiere is about Martin Luther King Jr.’s years in Boston and is framed by the journey to Selma and the crossing of the Edmund Pettus Bridge
Performance Date:2026

In the meanwhile, X journeys to Seattle, Omaha, Chicago and finally the Metropolitan Opera, where another singer is announced to perform the title role, for reasons it is difficult to imagine. The recording of the BMOP version will set the standard for the future.  It will be available here.

X: The Life and Times of Malcolm X
An opera in three acts
Libretto by Thulani Davis
Story by Christopher Davis
The Strand Theatre
Dorchester, Massachusetts
A production of Boston Modern Opera Project in partnership with Odyssey Opera of Boston