Hanging With ATCA in Sausalito

The Legend of Georgia McBride 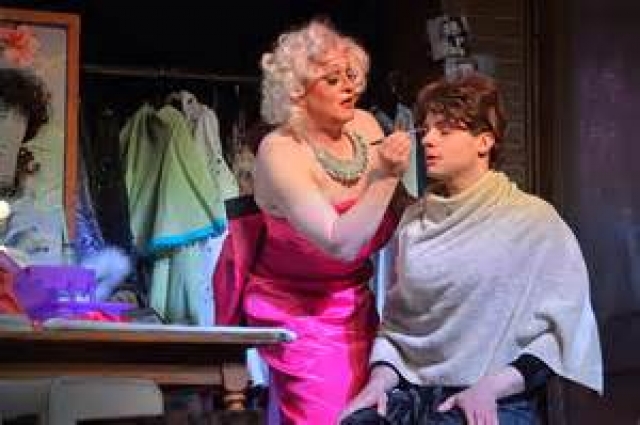 Prior to the annual conference of American Theatre Critics Association in San Francisco there were a couple of days of executive meetings.

Generously, we were offered space in the Marin Theatre Company.

That's relatively close to the house boat of board member Brad and his wife, Teddie. Following the meeting they hosted a reception in their remarkable Sausalito home.

Houseboats, which can go for a million plus, were nothing like what I imagined.

To me it conjured more of a hippie thing. Like the barges in Amsterdam or along the canals near Paraza in the south of France where we joined artists in residence.

Driving around our hosts informed us that Otis Redding's last hit "Sitting on a Dock of the Bay" was written when he visited Sausalito. The exact dock is a matter of some dispute.

A warehouse where the Grateful Dead were known to hang out and rehearse was pointed out. It apparently still has wall paintings by Jerry Garcia and Pigpen.

I know this dates me but that's Jerry Garcia, as in the now deceased rocker who I hung out with when the band came East. There was a famous acid laced punch during a New Year's Eve performance and party at the Boston Tea Party.

Perhaps our younger readers were thinking of Cherry Garcia as in the Ben and Gerry's ice cream another hippie thing.

Our small group of ATCA execs were taken back to MTC for the evening performance of The Legend of Georgia McBride.

Which was, to tell the gosh darn honest truth, a mixed blessing.

Commuting back to Frisco there was a lively discussion.

Colleagues commented on productions of The Legend of Georgia McBride in their regions of the nation.

There are, by now, some well vetted arguments primarily about casting for this play.

For example, just how straight do you want the leading man to be?

By a quirk Casey (Adam Magill) the down on his luck Elvis impersonator, who blew the rent on a slice of pizza, has a chance to bring home the bacon in a drag show. The twist is that he doesn't tell his pregnant wife where he is getting all that cash.

And, would you believe it, he has a real following. Is he getting into the drag scene, for whatever reason, or just working a job? As a fellow artist reveals to him drag is not just a means of making a living but a way of life.

Many plot points and character developments, particularly the wife played by Tatiana Wechsler, were inadequately directed by Kent Gash.

Done right colleagues state that this can be a really funny, moving, and terrific show. It's why there are so many productions and this one is selling well and has been extended.

The costumes designed by Kara Harmon, for example, OMG! Fabulous!

By the way, real critics do not use exclamation marks except on the rarest of occasions.

You will never, but never, see them in the Times.

During an ATCA tech panel one of the presenters, Abra Bergman, was a renowned costume designer. I asked her about Georgia McBride. She worked on an aspect of the show giving the guys curves. It seems that a team of eight was in stitches, so to speak, day and night for several weeks.

But, my friends, it takes more than a dress, makeup, wigs and falsies to turn a man into a woman.

Knowing that this was a play by Matthew Lopez there were elevated expectations. We saw his superb The Whipping Man in the Berkshires and Indianapolis. That play was produced all over the country as is this one.

Another question making the rounds is why the company didn't opt for a couple of real drag queens for this show? There are two answers. The first is that this is a play, damn it, and female impersonators aren't necessarily actors.

The second and more surprising one is that all of the Bay Area drag artists are fully booked. In Frisco it's an out of the cottage industry.

There were definitely enjoyable aspects of this production as an evening of pure entertainment. Mostly though it was, shall we say, nip and tuck.