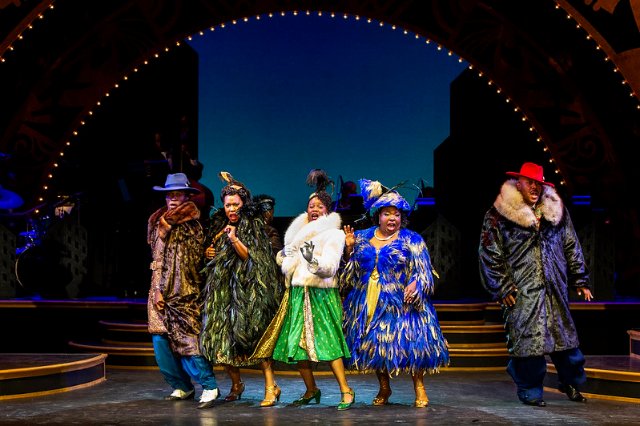 Artistic director, Julianne Boyd, in her storied career will be remembered for many stunning musicals. That run ends this season with a revival of the 1978, Tony winner, Ain’t Misbehavin: The Fats Waller Musical Show. The jukebox musical runs some two hours with an intermission.

Based on the opening night audience, reception for the high energy populist show, particularly the whoops, hollers and shout outs from the back of the house, it should bring home the bacon for the Pittsfield based company.

Thomas Wright "Fats" Waller (May 21, 1904 – December 15, 1943) was an American jazz pianist, organist, composer, violinist, singer, and comedic entertainer. With his partner Andy Razaf they copyrighted some 400 songs. There are even more sold and attributed to other composers.

In the canon of jazz he was a cutup and comical presence. He is respected for his chops as a light fingered and glib Harlem stride pianist. Clips from films show him camping it up, shucking and jiving in a self-effacing manner. In an accessible, populist approach he wrote several hit Broadway musicals.

During the era of big bands he preferred smaller ensembles. The seven pieces for the Barrington production are an accurate simulacrum of his genre. Drummer Jackie Whitmill and KJ Gray were particularly astute in creating the subtle accents of Waller’s music. While conductor/ pianist, Kwinton Gray, was superb he lacked the duende for Waller’s unique, tickling the keys, whimsical and fluid style. Waller had the speed and flourish of Art Tatum and Oscar Peterson with the whimsy and wit of Chico Marx.

The genius and pure entertainment of Fats Waller is best appreciated in the extended solos compiled by RCA Victor. In this work, similar to that of Jellyroll Morton for the Library of Congress, we best appreciate the subtle shifts and rollicking humor behind his standards like “Ain’t Misbehavin,” and “Honeysuckle Rose.” There are wonderful ditties like “Spider and the Fly.” He creates the ambiance of a Harlem rent party when he and James P. Johnson were featured. Or Bessie Smith bellowed “Give me a reefer and a bottle of beer.”

Compared to vintage raucous hilarity the production at Barrington Stage is tepid and housebroken. We wonder if the musical has aged well since 1978 when it was viewed as innovative. So much has changed in American theatre that this seems like a throwback to when camping it up was the norm for Broadway. It was the era of Eartha Kitt, Pearl Bailey and Sammy Davis, Jr.

The brilliant, prolific, all too brief career of Waller ended with pneumonia at the age of 39 during WWII. It was a time when African Americans fought and gave their lives only to return home to lynchings and racism.

The clowning and camping of Waller and Louis Armstrong was a well calculated protective shield, or mask, to deflect racism. Rarely did they take it on directly.

There is a distinctive mood shift and staging when the ensemble performs “I’m So Black and Blue.” They form a cluster seated on chairs and the mood becomes slow and somber. Both Louis Armstrong and Ethel Waters transformed it into a blues standard.

Over two hours of his music we learn little about Waller. The songs, while wonderful, are strung together and follow no arc that reveals a story line. That’s the nature and standard criticism of jukebox musicals which are conceived as pure entertainment. The songs stand on their own and are taken as such. They lead us to no issues or insights. Which was the norm for 1978 but doesn’t fly today.

While Waller himself escapes us we have few if any insights to the individual personas and characters of the performers. The three women, in generic pastel dresses  by Dana Boetz, are a blur. During ensemble singing, particularly when they cruise in the upper range, there is more cacophony than harmony. Unless you know the songs you can’t follow the lyrics.

The set by Raul Abrego evokes an art deco nightclub. It is more of a bistro than a landmark like the Cotton Club. Perhaps it’s a neighborhood joint. Are the entertainers local people on a Saturday night or pimps and hustlers?

The costumes for the two men suggest that. But it is difficult to intuit who the designer, Botez, is referencing. The closest I can think of is Cab Calloway, but the baggy pegged pants, and cummerbund waist, suggest California zoot suits of the later 1950s. Arnold Harper II is a large man and the floppy pants just render him immense and ungainly.

The first act felt long and lacking in pace and breathing room between all those iconic songs.

There was a refreshing and galvanic paradigm shift when the second act was launched in attack mode. It started with an instrumental step back featuring the band setting the pace.

Wearing over the top, outlandish outfits the company got their chops into “Spreading Rhythm Around” and the evocatively descriptive “Lounging at the Waldforf.” That seemed to provide some site specific context for the mayhem and hilarity.

There was a welcome paradigm shift from ensemble work to solos and duets.

This was launched most effectively when Jarvis B. Manning, Jr. was cut loose with “The Viper’s Drag/ The Reefer Song.” Waller had a dream/ hallucination about a “reefer five feet long.” The lithe performer was all over the stage and even up on top of the piano. By far it was the best moment of the production. Then Maiesha McQueen plaintively milked the poignant suffering of “Mean to Me.”

That momentum took a step back with Harper’s crushing rendering of what should be a light and witty “Your Feet’s Too Big.” The staging started with him stuck behind the bar from which he makes his way. Given his size there was pitiful irony as he stomped the stage with complaints about her less than delicate feet. Need we say that it is an embarrassingly dated, sexist piece?

Harper fared better with the solo “I’m Going To Sit Right Down and Write Myself a Letter” and make believe it came from you.  It was a 1935 song with music by Fred E. Ahlert and lyrics by Joe Young which Waller recorded that year. I recall the 1957 recording by Billy Williams with orchestra directed by Dick Jacobs. It reached #3 on the charts.

The second act flew by ending with reprieves of Waller’s greatest hits “Honeysuckle Rose” and “Ain’t Misbehavin.” The band vamped as a thoroughly entertained audience titubated their way out of the theatre.