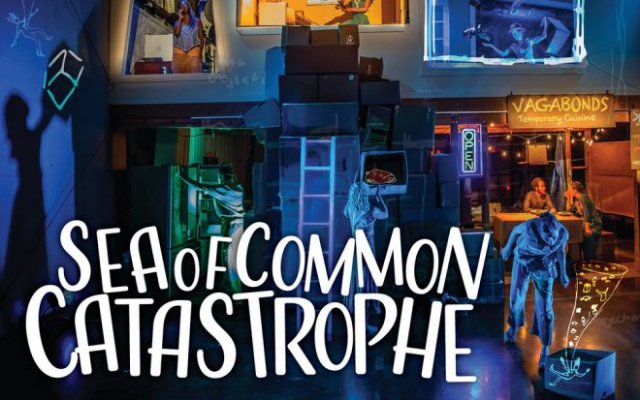 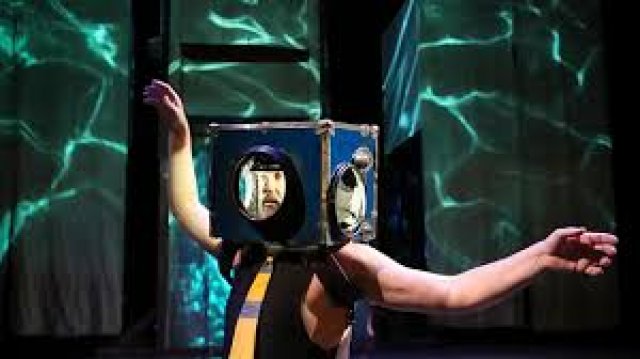 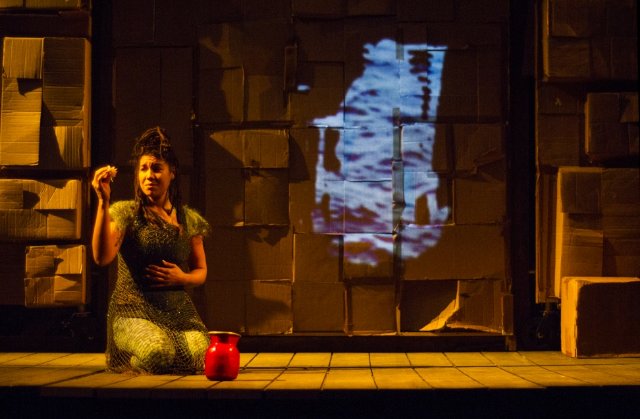 The red pitcher in the sea's underworld 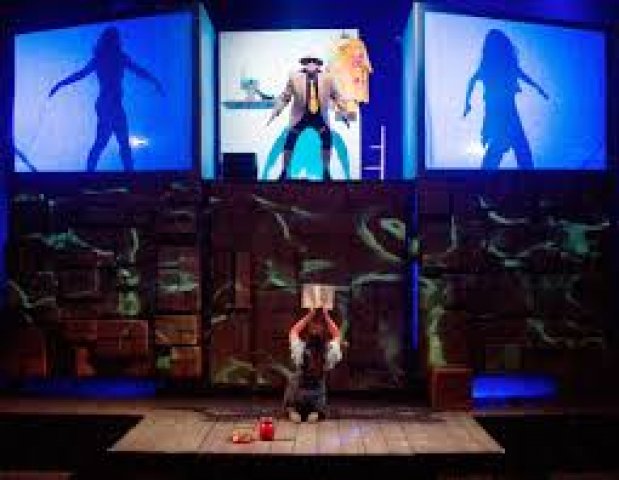 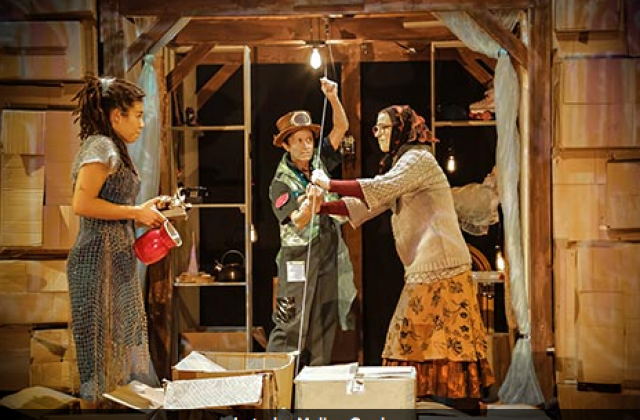 Exploring cartons leagues under the sea 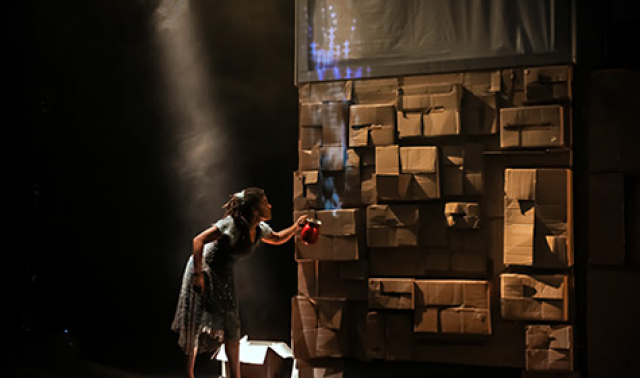 Dona doesn't give up!

The Sea of Common Catastrophe by Jeff Becker is playing at Irondale, a dramatic and inviting space on South Oxford Street in Brooklyn.  Becker was inspired by Gabriel Garcia Marquez’ short story and invites the audience to suspend disbelief and immerse themselves in the beautiful images and dance of the performers.  The words of Marquez and poet Jessica Henricksen are spoken in snippets as lights dance and the waters of the ocean swirl around. This is immersion theater at its best.

A series of water and sea scapes are animated by gesture and song. In the first scene, Clara (Mahalia Abéo Tibbs) sings a song about “How to make a sea in 10 easy steps.” Is this a new book in the Dummies series? The answers make ‘wet’ sense. Cry. Tears can be gathered to become a new pool of hope. Clara interacts with the set, a wall of cardboard boxes. Packing treasured objects into boxes feels not just like moving, but like also displacement. Katrina forced this on citizens of New Orleans.

Mr. Herbert (Jeffrey Gunshol) arrives in town, at the top of the central column. He takes over Perpetua’s café, beginning the new order in town. The word “Possibilities” dances on a screen.

Yet we never worry about the meaning of what is happening before our eyes or hugging our ears. Instead we are swept along as the characters drop from the upper deck, mounted on a tall column, to a home beneath the sea.

Physically the lower portion of the central column, one of three, flops open to reveal a curtained area, and a second level of drama.

Two other columns, at the right and left, have a front made of cardboard boxes, full of the detritus of life including prominently a picture frame and a red pitcher, from which water can be poured to make pools and oceans! A bouquet of roses is lifted from Marquez. When dead people are buried in the ocean, their gifted flowers accompany them.

As a resident of New Orleans for the past two decades Becker’s artistic preoccupation with water is hardly surprising. He lives in the Delta of the Mississippi River and the Atchafalaya Basin surrounds. While the dangers of water are in the front of the memory when New Orleans is mentioned, in this theatrical piece its universal presence as home and hearth is what is felt. We all come from the sea and if we are lucky, return to it.

Becker often works with the same artists, and the comforts of collaboration are clearly felt. Kathy Randels, Lisa Morschi Shattuck, Mahalia Abeo Tibbs and Jeffrey Gunshol dance together, spool off each other and wind and unwind. Added to the cast are two young actors from the neighborhood, Kendall Stirrup and Amira Abdur-Raheem, who seamlessly fit with their bowler hats and costumes touched with green.

Music was provided by an electric piano, which became an organ and also the tinkling chimes of bells. A chorus is perched in the upper balcony which surrounds the large theatrical space. The Lafayette Inspirational Ensemble were a moving accompaniment.

Spaces like Irondale inspire both audience and performers. The audience is on risers backing into one wall, looking out over the huge, moving set. Projections take us to other worlds. Courtney Egan gives us both the objects of land life tumbling around and the ocean itself mainly as background to articulating actors.

The actors sing songs which include the familiar and not so familiar. Sea of Common Catastrophe offers the pleasure of single vision, Jeff Becker’s inspired by Marquez. The surprise of the unfamiliar in two actors and chorus add to the moving mix.

A few steps from the Barclay Center, Irondale is accessible. This show is well worth the trip.