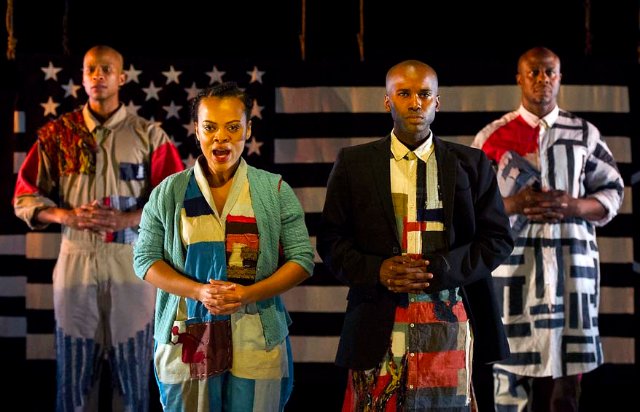 The broad reach of the one-act, ninety minute play is truly ambitious and immense. Set in the future the ensemble of four actors are seemingly indentured to a grueling and inhumane schedule. In four acts they present a minstrel show, satire, vaudeville revue, side show, Saturday Night Live parody of horrific chapters in the history of the American negro. This is the preferred term of the playwright while other more derogatory ones are inserted into the time line for dramatic impact.

The twelve times a day performances, with two thirty minute breaks are performed in a ‘secured family entertainment center.’ There is the Orwellian “Big Mother” voice of a controlling white woman (Peggy Phar Wilson). From an unseen booth she functions as stage manager, administrator and mistress. When the performers get out of line they are ordered to come to “the office.” It’s an indication of punishment up to and including extermination.

Rose has a manner of nesting analogies. While the actors depict the African Diaspora and impact of slavery, Reconstruction and eventual racial implosion, they are indeed enslaved. They both depict slavery as well as embody it. Accordingly, we get locked into a roiling and convoluted narrative. So much is unfamiliar, in form and style, that the audience is kept off kilter and never on firm footing.

We can’t quite get a handle on the point of view of the play, what or why we are seeing. This is a familiar trope of modernist, avant-garde theatre from Alfred Jarry, through Luigi Pirandello, Samuel Beckett, Antonin Artaud, Albert Camus, Jean Paul Sartre, and Jean Genet.


With an MFA in Dramatic Writing from NYU Tisch School of the Arts one assumes that Rose has absorbed all of these radical traditions. She has reconfigured them with timely application to the current mode of social justice programming. The greatest impact of this new work is that it is truly of the moment. Its relevance is an ability to put the terrible division of racism in America back into the bottle/ Pandora’s box. She delivers it as disturbing, thought provoking theatre. The full tilt assault on the senses has the audience squirming in their seats. We attend the current mode of activist theatre at our own risk.

Indeed The Voice advises the audience on how to behave watching this racially inflected spectacle in a safe and secure environment. That includes the use of firearms for our own protection in the likely event that things get out of hand. Which indeed they do.

It is difficult to sort whether this experience was one of pleasure and insight or disorienting discomfort, psychic introspection, and agita. As white people witnessing this performance we have a role in its racist narrative. As Americans it’s in our DNA. If our ancestors were not around during the era of slavery we have inherited its aftermath. In a social justice paradigm we are not allowed to be passive about our history. We are mandated to be anti-racist activists.

We live in an era where it is no longer possible to be passive aggressive. The final scene of the play states that the demise of the Negro in America, while largely self inflicted, also resulted from actions by our culture and government. One need look no further than our president and his racist actions and support for white supremacy activists.

“I’ve condemned neo-Nazis. I’ve condemned many different groups. But not all of those people were neo-Nazis, believe me,” President Trump said of violent demonstrations at Charlottesville.

“You had many people in that group other than neo-Nazis and white nationalists. The press has treated them absolutely unfairly…You also had some very fine people on both sides.”

For all of these reasons Rose’s play, while contentious and demanding to endure, is the inaugural winner of The Bonnie and Terry Burman New Play Award, a new national play contest at BSC. Initially 461 plays were submitted, culled to 70 semi-finalists, and 7 finalists. In addition to a $25,000 award the play has been produced. Given this prestige it is likely to have other regional productions and awards.

For a proper launch BSC has done everything right. The cast is terrific and we are treated to superb song and dance as well as intensive dramatic tension. The mottled, African, patch work, carnivalesque costumes by Ntokozo Fuzunima Kunene both dazzle the eye and intrigue. They help us to comprehend the confluence of African and African American traditions and culture.

Through the evening, which has enervating and sluggish passages, there are many mood and genre shifts. We are never quite sure of what’s going down. There are transitions from the actors off stage, where we see them as individuals, and then their roles as performers in the four period pieces.

The set by Jack Magaw is dominated by a stage-within-a-stage. There is a simple curtain drawn to define the acts. In front, and on the sides of the stage props and costumes are stored. It’s where the actors hang out and are kept in line by Donovan who is older and commanding. There is a conflict with Jeffrey who wants to know when and if he will see his family. Leigh comforts Grant who has missed a meal. He’s sick and fatigued. She offers advise, comfort and an apple. She suggests that, if they become a couple, they will get certain privileges. As the last survivors of an extinct race it is implied that they will be bred to sustain the company.

Particularly in the early stages of the play the audience laughed. The first historical sequence included an upbeat twist on the comedic “I’m Just Wild About Harry.” That was rendered as “I’m Just Wild About Negros.” It seemed that we were in for an evening of fun until each new sequence grew more ominous. During Reconstruction, for example, it was implied that emancipated slaves no longer had the loving protection, food and shelter, of former masters.

The discussion of that phenomenon is in the news with debate about reparations. The pledge of forty acres and a mule never happened. In the Jim Crow South it is argued that conditions were even worse for emancipated Negros. It is reported that they were looted of millions of acres of land and property. It is argued that, if indeed forty acres and a mule had been followed through, generations of repression, racism and poverty would not have ensued.

As CNN reported “Senate Majority Leader Mitch McConnell said Tuesday he opposes paying reparations for slavery, arguing "none of us currently living are responsible" for what he called America's "original sin."

"I don't think reparations for something that happened 150 years ago for whom none of us currently living are responsible is a good idea," the Kentucky Republican told reporters in response to a question about whether reparations should be paid or a public apology should be made by Congress or the President.

"We've tried to deal with our original sin of slavery by fighting a civil war, by passing landmark civil rights legislation. We elected an African American president," he said.

As part of the design scheme during the “plays” various flags drop. Instead or red white and blue they are generally black and white. This includes the Confederate flag.

There is a violent end of the play. The actors leave a bare stage. More banners drop including on walls surrounding the audience. We anticipate a curtain call for the actors. That never happens. In subdued lighting we listen to the Marvin Gaye anthem “What’s Going On.” The audience is stunned and confused. A woman in front of me said to her husband “We don’t have to listen to this music. Let’s leave.”

It was the final stunt of a provocative performance. By then the doors were open and the audience filtered out somewhat rattled. Surely there were lively discussions on the way home.