The Late Wedding by Christopher Chen 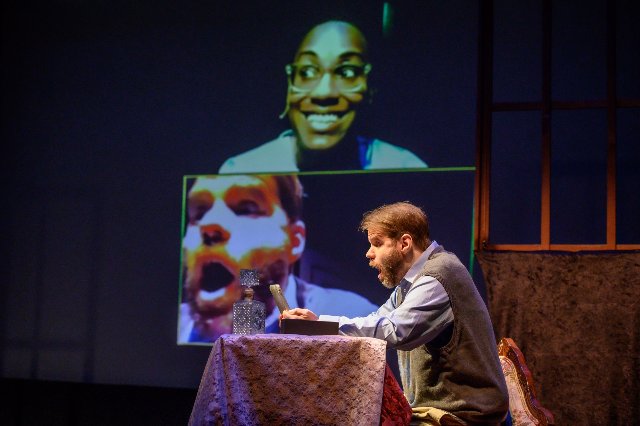 Christopher Chen, born and raised in San Francisco, is one of the Bay Area’s favorite playwrights.  Innovative in structure and subject, funny and thoughtful, his plays break new ground.  But the title block on the program itself suggests that “The Late Wedding” goes a step beyond even his extraordinary.  Rather than stating that the play is “by” the playwright, it indicates that the play is “from the notes of Christopher Chen.”  This odd citation becomes the crux of the play’s structure and the basis for its criticism.  Those who favor the absurd; who value creativity; who appreciate skit comedy; and who follow the work of the playwright will be most drawn to this play.

With their fully-staged production of Chen’s work, kudos to Mountain View’s Pear Theatre for leading the way in the return to indoor theater after 15 months of pandemic-imposed darkness.  The adventuresome small company not only offers socially-distanced indoor performances to a play with a full cast, but also outdoor performances and online streaming, to accommodate all manner of theater lover.  Hallelujah!

The company gives a spirited rendering of the play, directed by Sinohui Hinojosa.  The cast is led by the highly animated Annamarie MacLeod as the narrator, who tries from time-to-time to inject meaning into the proceedings.  Six other actors play multiple roles in the dozen-ish sketches that comprise the narrative.  Largely, the performers fit the characters well and imbue them with verve, though not all are equally convincing.

So, what is the playwright up to?  Chen acknowledges in the play itself the influence of Italo Calvino’s “Invisible Cities,” in which Emperor Kublai Khan discusses with merchants the cities that they trade in – thereby learning the nature of people in the various outposts.  In the case of “The Late Wedding,” relationships replace cities.  The unfolding of unusual foreign social practices yields farcical situations that produce more smiles than hardi-har belly laughs.

The first three segments provide a humorous anthropological look at what conventional people would consider strange marriage practices in these fictional places.  For example, in one venue, courtship is so revered and marriage considered such a letdown that true believers remain apart after marriage for as long as they can!  In another, marriage is so open that parents routinely don’t know who the fathers of their children are.

The formula then shifts to what Chen calls interludes, which are also segments largely focused on relationships.  In a thriller episode, a spy meets her handler and tries to prove legitimacy, despite having forgotten part of the passcode.  In a latter segment, a spaceship seeks the celestial bodies of the Calaman Islands, which played as a separate honeymoon destination for the earlier couple who planned to live blissfully apart.  While this closes one story loop, it doesn’t provide a prism through which to see the full procession of vignettes.

Many other playwrights have used absurdism as a central theme, such as one of Calvino’s inspirations, Luigi Pirandello, with his “Six Characters in Search of an Author.”  And giving broad latitude to directors on fleshing out and casting shows with many roles has been done by the likes of Caryl Churchill in “Love and Information.”  But as opposed to Chen’s play, those pieces convey the sense that they were completed as designed. That said, while much action in “The Late Wedding” is fanciful and disjointed, it is underscored by important themes such as social mores, time, perception, change, and morality.

“The Late Wedding” gives the sense that the playwright cobbled together several ideas that he couldn’t fully develop individually.  The fact that authorship attribution of the play is to “the notes of Christopher Chen” and that a comment within the play notes that it includes leftovers conforms with the thinking that the sketches are an omnium gatherum.  It even raises the question of whether he is responsible for the final text.  Also, extraneous “notes” appear throughout the play, including grocery lists and questions whether certain commentary in the manuscript was intended to be text or the playwright’s reminders to himself.  And the final support to the notion that the design is not premeditated is that there is explicit reference to writer’s block.

Of course, all of these diversions could be subterfuge – red herrings to make the audience think that the structure is chaotic rather than calculated to seem incoherent.  In any case, it is provocative and entertaining.  But ultimately, does the work stand on its own as patchwork comedy? As metatheatrical exposition? As an expression of absurdism?  Is it art?  It’s up to you to decide.

“The Late Wedding” from the notes of Christopher Chen is produced by Pear Theatre and plays on its stage and outside of that venue at 1110 La Avenida, Mountain View, CA, and streaming online through July 18, 2021.