Basquiat x Warhol at The School 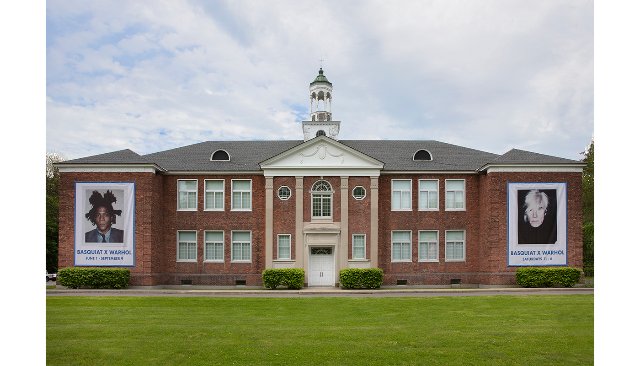 The School in Kinderhook. 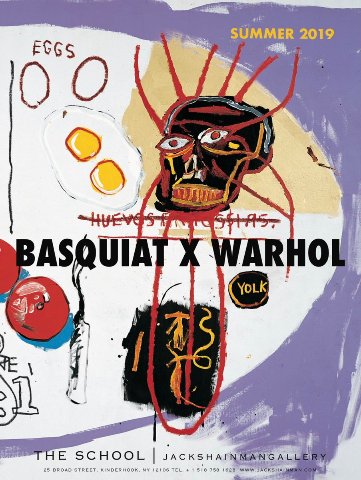 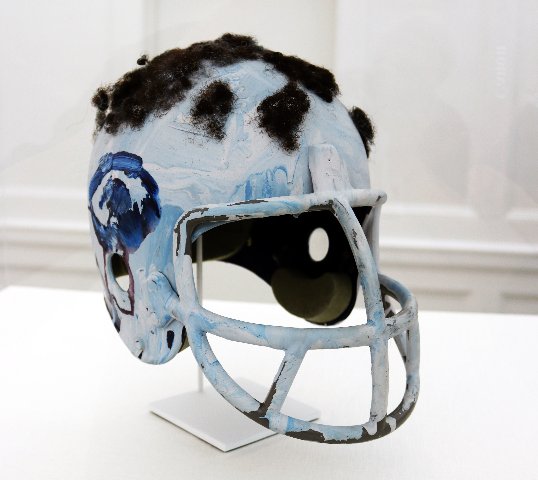 Basquiat asked Warhol to wear the helmet for a day. 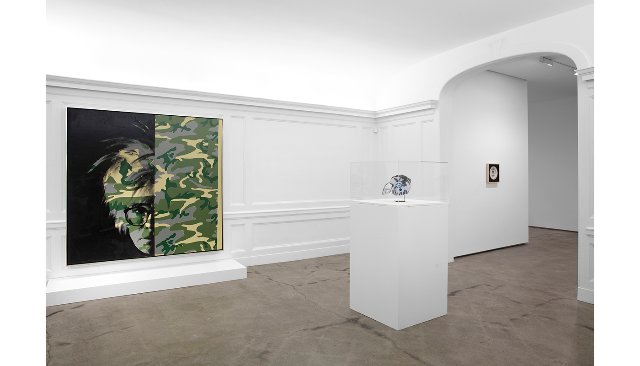 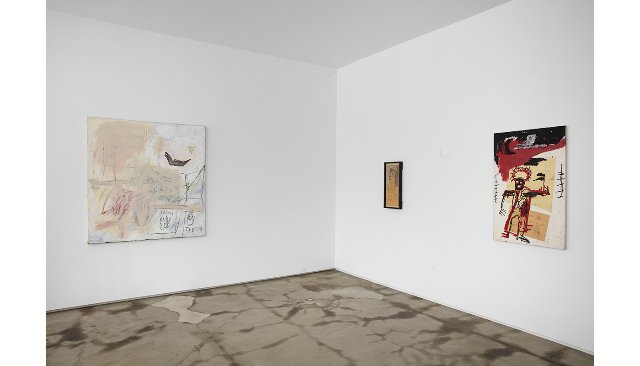 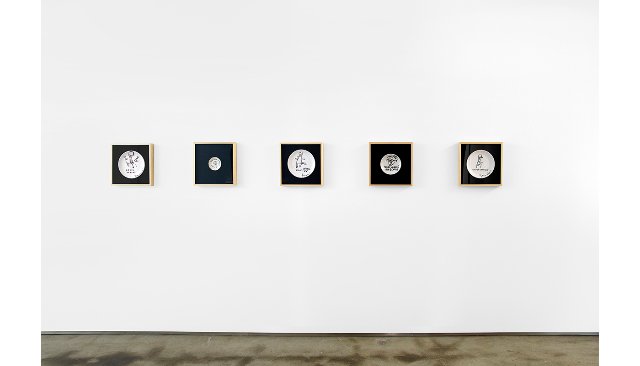 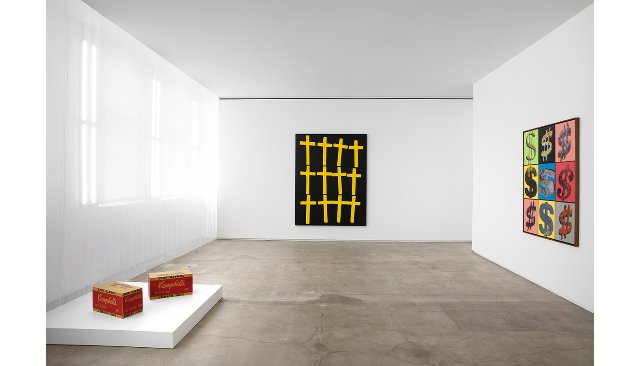 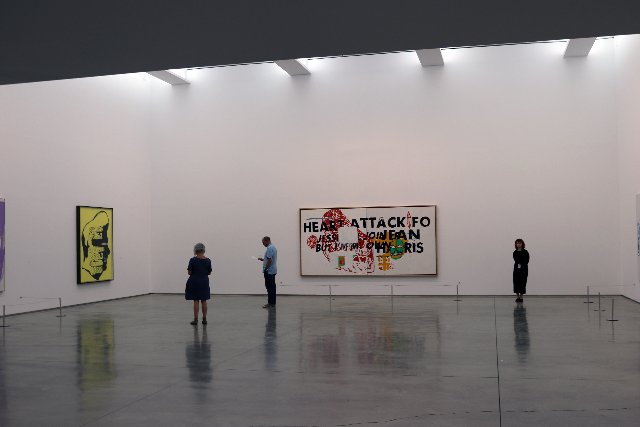 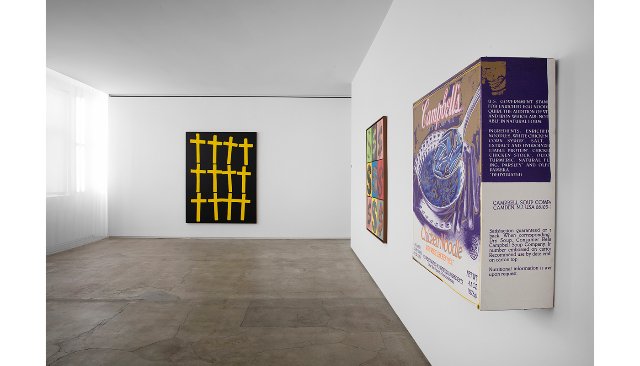 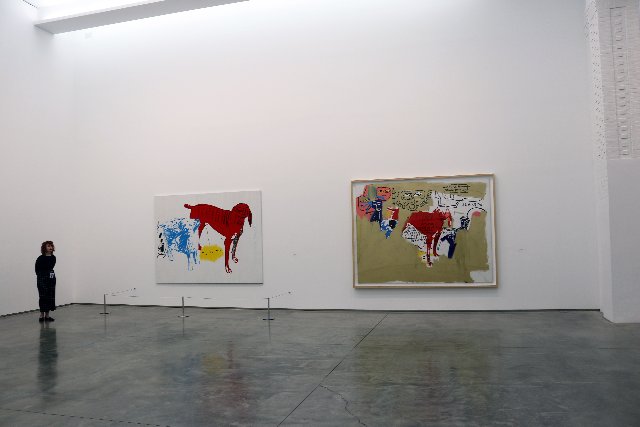 The New York gallerist, Jack Shainman, grew up in Williamstown were he visits each summer. Five years ago, in Kinderhook, New York, he opened a gallery/ museum The School.

Through September 7 it is open on Saturdays. On a glorious day we navigated country roads from North Adams, Massachusetts.

I have covered Shainman since he started in Provincetown decades ago. In the city we always visit the gallery. His partner, Claude Simard, passed away in 2014. There is a small, poignant memorial to the French Canadian artist/gallerist in The School. Simard was a frequent traveler in Africa and India and was seminal to the gallery representing major African and African American artists.

For the current season The School features Basquiat x Warhol controversial collaborative works by Jean-Michel Basquiat (1960-1988) and Andy Warhol (1928-1987). Their bromance ended after a vicious, September 20, 1985 New York Times review by Vivien Raynor. She wrote that Basquiat was “…doing a pas de deux with Andy Warhol, a mentor who assisted in his rise to fame. Actually, it's a version of the Oedipus story: Warhol, one of Pop's pops, paints, say, General Electric's logo, a New York Post headline or his own image of dentures; his 25-year-old protégé adds to or subtracts from it with his more or less expressionistic imagery. The 16 results - all 'Untitleds,' of course - are large, bright, messy, full of private jokes and inconclusive… the collaboration looks like one of Warhol's manipulations, which increasingly seem based on the Mencken theory about nobody going broke underestimating the public's intelligence. Basquiat, meanwhile, comes across as the all too willing accessory.”

Basquiat first appears in Warhol’s Diaries on Monday, October 4, 1982. “He’s just one of those kids who drives me crazy…and then Bruno [Bischofberger] discovered him and now he’s on Easy Street… had lunch for them and then I took a Polaroid and he went home and within two hours a painting was back, still wet, of him and me together…”

There is endless and often unkind speculation about their cobra/ mongoose relationship. Creatively Warhol was on a downward spiral. Abandoning The Factory as too dangerous, after getting shot by Valerie Solanas (June 3, 1968), he opted to hang with VIP’s at Studio 54. He cashed in by making formulaic celebrity portraits.

Despite being shunned by MoMA, The Whitney Museum, and mainstream art world Basquiat was on the upswing from graffiti art to galleries. Notoriously, dealers like Annina Nosei, Bischofberger, and Tony Shafrazi fueled his work with mountains of cocaine and smack. He stuffed the pockets of paint spattered designer suits with wads of cash.

It was all trashy, tragic and outré but reeks of bohemian chic that informs market making major museum extravaganzas and this intriguing rural sidebar in Kinderhook.

The jury is out as to who got the upper hand in their fraught, symbiotic relationship. In PR for their Shafrazi show they were depicted as boxers going toe-to-toe. It’s said that Basquiat got the TKO although the media presented him as a Warhol mascot.

Race was key to their differences. The son of a middle class Haitian father and mentally disturbed Puerto Rican mother the artist left home at an early age. Against all odds, posthumously, he is the most acclaimed artist of his generation. His too brief life, however, was one of addiction and discrimination. Following an OD he left a thousand paintings and ten times that number of drawings. It is said that even more works were stashed.

The estate is valued in the billions and museums are being formed to display collections. There is a bidding war to secure the best works. In 2017, a 1982 painting of a skull brought $110.5 million at Sotheby’s, to become the sixth most expensive work ever sold at auction.

Entering The School evokes immediate compare and contrast. Straight ahead is Warhol’s witty, camouflage self portrait. A master of pop marketing he sold himself as a logo.

The first work we encounter by Basquiat couldn’t be more funky. With voodoo panache nappy hair was pasted on top of a hand-painted football helmet. He asked Warhol to wear it for a day to see how it feels to walk around as a black man in racist America. It’s likely that campy Warhol, the King of Pop, missed the point. But Jean-Michel had a mojo that Warhol craved. The wigged-one sank his fangs into that fresh young blood.

Warhol collaborated with Franceso Clemente but focused on Basquiat. He also hung out with Keith Haring and other graffiti artists.

The School is oddly configured. We are diverted into a corridor that winds around until we find the main gallery and encounter the Minotaur. We follow the thread of Basquiat’s magic marker on plates. The series includes homage to 45 artists and individuals he admired. With wicked wit Warhol’s plate is inscribed “Boy Genius.”

One simply states “Cimabue.” It succinctly references the Italian Gothic painter. Basquiat had encyclopedic curiosity from anatomy and science to cartoons, sports and jazz. As a jazz fan I love when he lists the tracks on famous sides. We found titles from a Duke Ellington LP.

During long convalescence from a near fatal accident as a youngster his mother, who encouraged his interest in art, have him a copy of “Grey’s Anatomy.” Vignettes from that book appear frequently in the work, and with other imagery, signify references to her loving devotion.

The epic Warhol is a huge “Last Supper” in black and white. It’s the scale of Leonardo’s but with logos superimposed.

By contrast the instinct of Basquiat was for neo expressionism and a non traditional approach to materials. That entailed painting on found objects like the used door in this exhibition. His work conflated an outsider sensibility with an autodidacts’ knowledge of Western culture and art history. There is a flip flop between naïve and sophisticated.

There is a dialogue that he was used and manipulated particularly by art dealers. Those that knew him, however, state that he was a tsunami beyond control. Ultimately, he blew away all other New York based artists of his generation. Testament to that is his posthumously staggering market value.

The School borrowed from private collections. There is a heady mix of major and minor works as well as videos. Unfamiliar aspects, more peripheral than iconic, prompt reevaluation of their vast oeuvre. Both artists were unusually prolific.

The room of collaborative paintings leaves me feeling mixed. The best works are missing. They are best when Basquiat cancelled and obliterated the work of Warhol. Andy never seems adequately to counter punch. It is speculated as to how many of these combo works exist. Bishofberger is said to have commissioned sixty to eighty paintings but the project wasn’t completed. The dealer proposed buying everything they produced.

The death of Warhol, complications recovering from routine surgery, devastated Basquiat. Bad habits got worse. Their demise within a year of each other haunts this exhibition. Perhaps this review is an autopsy for which I offer an apology.

A version of this article was previously posted to Arts Fuse.