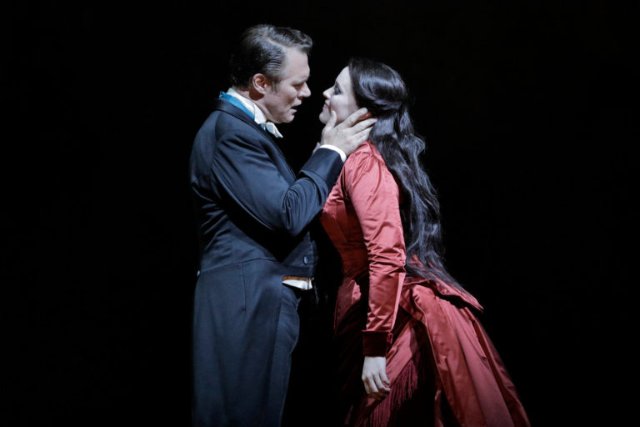 Brandon Jovanovich as the Prince, Rachel Willis-Sørensen as Rusalka. Photo by Cory Weaver.

The storyline of a water nymph yearning to breathe free on land and fall in love resonates widely. General audiences will be most familiar with Hans Christian Andersen’s The Little Mermaid and Friedrich Fouqué’s Undine. For the opera Rusalka, composer Antonín Dvo?ák’s librettist, Jaroslav Kvapil, drew more directly on Czech fairytales by Karel Jaromir Erben and Božena N?mcová. But unlike Disney’s treatment of The Little Mermaid, Rusalka’s darkness does not give way to light. This stern moral tale reaffirms the Faustian caution of making deals with the devil. But what does shine bright is San Francisco Opera’s stellar production, which excels on every dimension.

In addition to an involving plot, the opera contains richly drawn personae and situations. Yet the proof of the pudding is in the music, and Dvorák offers a brilliant score. As a turn of the (20th) century piece, tonal melody was still the mode, and the composer exploits the virtues of the idiom. Rusalka offers a captivating array of musical themes and recurring motifs identified by instruments such as the harp and flute, that result in a wholly euphonious musical experience.

The score and libretto are aided by David McVicar and Leah Hausman’s stunning staging that reminds us what grand opera is all about. John Macfarlane designed the sets. The dominant setting is the primordial swamp of dank mangrove-like forest and foreboding waters below, populated with nymphs and mythic characters. It is from this world that Rusalka wishes to escape, making her bargain with the witch Ježibaba, who exacts the condition that Rusalka’s voice will not be heard by human beings. Although she will attract her Prince, Rusalka’s inability to communicate will confuse him and undermine her human experience.

The action of the human world occurs in the palace. The striking rustic Gothic great room is lit in fiery tones, and the walls are festooned in stags’ heads, suggesting humankind’s debt to and abuse of nature. It is here that Rusalka will feel the isolation as machinations take place to try to replace Rusalka as the Prince’s consort, with the well-known and more conventional Foreign Princess.

Like a number of operas, the litmus test of the title role performance is judged by a single aria. In this case, it is the haunting and beautiful “Song to the Moon” from Act I. In her career, soprano Rachel Willis-Sørensen evidences great vocal versatility, with a repertoire of lyric as well as dramatic roles, and here she displays it all in one aria, both caressing with light entreaty and persisting with more steely resolve. Throughout the performance she demonstrates powerful dramatic style in the upper ranges and more understated lyricism in the lower.

No weakness can be found in this cast. Other standouts include tenor Brandon Jovanovich as the Prince. His commanding presence and heroic vocal style perfectly fit the needs of the role, which culminates in the fine rendering of his part in the climactic tragic duet with Rusalka. The spiciest role is that of Ježibaba, and who better to deliver the goods than the redoubtable mezzo Jamie Barton. She chews up the scenery as the scowling, vituperative, vindictive witch, and her vocal expression lives up to the characterization.

All of the musical elements are coordinated with precision by conductor Eun Sun Kim. Design elements contribute to making this a fully integrated musical experience. The great variety of costuming designed by Moritz Junge, from human-sized crows to the sartorially-challenged rags of Ježibaba, adds visual richness to the staging. Finally, Andrew George’s insightful choreography reminds us why opera and ballet link together so well. In addition to fine close-order ballet sequences, other interpretive dances by nymphs, from klutzy to graceful to dance without legs being visible, add depth to the spectacle.

This production shows Rusalka in all its glory. Yet the opera is not often performed in this country, despite the resurgence of Czech opera. Language is certainly a limitation, if it is to be sung in the original language. The clock time, a little excessive at 3:40 including intermissions, poses many additional costs and burdens. And extensive choreography adds another layer of complication. Fortunately, we in the Bay Area benefit from hosting a world class opera company that can meet the challenges of offering the most complex and demanding operas.