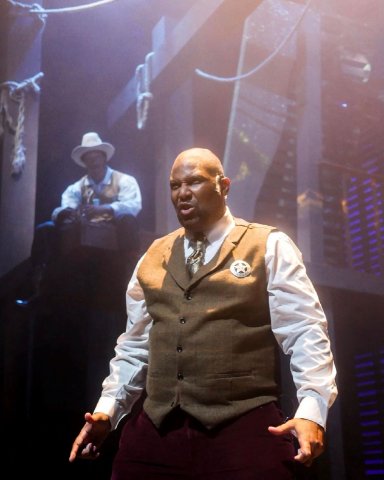 If I don't tell the stories, who will?

It's not just a rhetorical question but an attitude through which multi award-winning theater artist Layon Gray approaches his work. It involves writing about little-known African American historical figures, facts, places, and institutions.

On his website, layongray.com, he wrote the following: “I have been chosen to tell stories that erupt the soul and shed a beacon of light on those people or things that have been forgotten. To be a conduit from the past to the present – I accept that challenge.”

Currently, through his play titled Cowboy, Gray is entertaining and educating South Florida audiences about Bass Reeves (July 1838 – Jan. 12, 1910). He was a freed slave and the first black U.S. Deputy Marshall in American history. By the time he retired in 1907, Reeves arrested more than 3,000 felons. He also killed 14 outlaws to defend his life. And he was never wounded despite the fact that thugs shot off his hat and belt on separate occasions.

A production of Cowboy by Miami’s M Ensemble theater company has ended. Fortunately, Cowboy will open Off-Broadway later this year. But if the M Ensemble production, and a 2019 production at the National Black Theatre Festival are any indications, Cowboy will also be a tough ticket in New York. When Cowboy world premiered at the festival in North Carolina, the entire run of the play sold out within a few hours, Gray said.

“I think that people are very interested in the black cowboy experience,” said Gray, an affable-sounding African American man who radiates joy and pride, but not arrogance. Gray is directing Cowboy, while also portraying Reeves. “We don’t see a lot of black cowboys in film or television.”

At least, Gray said he has not seen any shows on television or film about them. And Gray added that he does not know of any plays that depict black cowboys, aside from Cowboy.

The play takes place in Indian territory in 1888. That is 23 years after the abolition of slavery. In the piece, Reeves, the first black U.S. Deputy Marshall in American history, and his companion are searching for two outlaws fleeing to the Mexican border. Soon, all of the play’s characters find themselves stuck in a saloon with a tornado approaching.

“The play is ultimately about the journey (from slavery) to freedom,” Gray said. “That’s the heartbeat of the play.”

"These Stories Choose Me"

He said he does not search for historical topics to write about. Rather, "these stories choose me," he said.

For instance, Gray did not plan to write about Reeves. Rather, he learned about the lawman while researching the women warriors of Dahomey, an 18th- and 19th-century Western African kingdom. During his research, Gray stumbled upon a picture of a big man with a big mustache and cowboy hat. Who was this person, he thought. And so, Gray decided to conduct further research on Reeves. Some people think he inspired the “Lone Ranger,” a fictional masked former Texas Ranger who fought outlaws in the American Old West with his Native American friend, Tonto.

Gray wrote the first draft of Cowboy in a span of about two weeks. Meanwhile, the company of actors who presented the play at the National Black Theatre Festival had to learn their parts in about 10 days, Gray said.

“I was amazed” at the demand for tickets, Gray said. “I thought ‘Maybe I have something here.’”

And so, following the festival in the late summer of 2019, Gray conducted a few staged readings of the play in New York. Later, M Ensemble, at 50 years old the oldest operating African American theater company in Florida, heard about Cowboy and wanted to produce it. However, the pandemic delayed the production until this year.

“It’s selling out every weekend, (and) the reviews have been amazing,” Gray said.

“After experiencing ‘Cowboy,’ you may never hear the word the same way again,” retired “Miami Herald” theater critic Christine Dolen wrote. She reviewed the production for artburstmiami.com. “Playwright Layon Gray has a gift for turning a wide range of stories from Black history into engaging, thought-provoking 21st century drama."

Meanwhile, on floridatheateronstage.com, critic John Thomason wrote: “Gray is a fine writer – as in much Tennessee Williams, there’s a regional poetry in the characters’ communication – but (Gray is) an even better director. The mesmerizing theatricality he brought to the staging of M Ensemble’s triumphant ‘Kings of Harlem in 2017 is present here as well.”

“Hello Layton, your play Cowboy with ASU Gammage was so moving,” someone wrote on Gray’s website four months ago. “I saw your Kings of Harlem play in Arizona as well. You are the modern-day August Wilson. I will look out for your next play.”

By the way, M Ensemble’s 2017 production of Kings of Harlem won four Carbonell Awards. The Carbonells recognize excellence in South Florida theater. Kings of Harlem centers on the professional New York Renaissance basketball team of the 1920s and 1930s.

Gray said many people think that the Harlem Globetrotters was the first African American professional basketball team. In fact, it was New York Renaissance, nicknamed the “Rens.”

The present-day National Basketball Association (NBA) learned about Kings of Harlem and Gray arranged a special performance for NBA greats.

"Everyone was amazed at the history," Gray said.

He is developing Kings of Harlem and Cowboy as feature films. Also, his latest stage play, de MOOR, about a black knight at King Arthur's Round table of "Camelot," will debut in Pittsburgh in October 2021. And his two-man play about Richard Pryor and Redd Foxx will debut off-Broadway in February 2022. Meanwhile, Gray’s Off-Broadway play about World War II’s Tuskegee Airmen, Black Angels Over Tuskegee, is aiming for a Broadway transfer in 2022-23. The piece is in its 11th year Off-Broadway. In addition, it has reached global audiences around the world. They include professional football teams playing in the National Football League (NFL). A couple of teams have seen the play, and it apparently moved them.

“It is amazing to see these big men in tears at the end of the show,” Gray said. “It’s a tear jerker. "It’s touched so many people around the world.”

The Tuskegee Airmen were a group of primarily African American military pilots and airmen who fought in World War II.

Gray said he thought the play appealed to professional football players because, like football, the airmen were a part of a team.  “It’s about teamwork, commitment, and trusting one another," Gray said about his play.

Gray has spent more than 20 years writing, directing, and developing stage plays and films. They reflect a wide array of cultural movements. Altogether, he has earned more than 60 awards and nominations.

Gray, who hails from Alexandria, La., said it’s a “humbling experience” to know that he, a “small country boy," is moving people to tears, laughter, and joy through his words. He's also educating audiences, without lecturing them.

He imparts knowledge "without beating your head over with facts," Gray said.

While he has written for film, Gray said live theater is an incomparable art form.

"You live in the moment right there, and everyone is on the edge of their seats waiting to hear what you have to say," he said. "It’s truly a powerful rush that I missed during the pandemic and feel so blessed to be able to do what I love again."

For more information about Gray, visit his website at www.layongray.com.