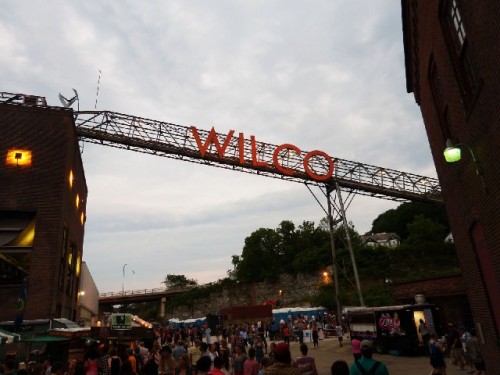 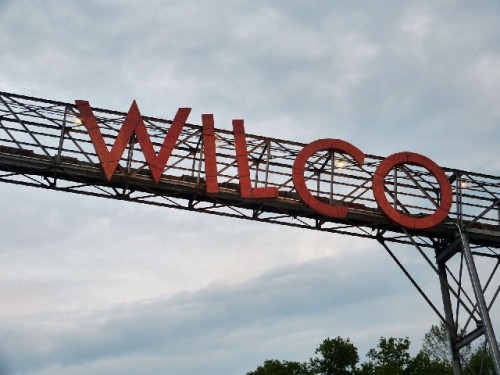 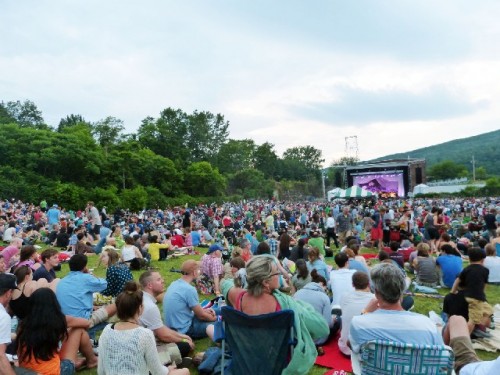 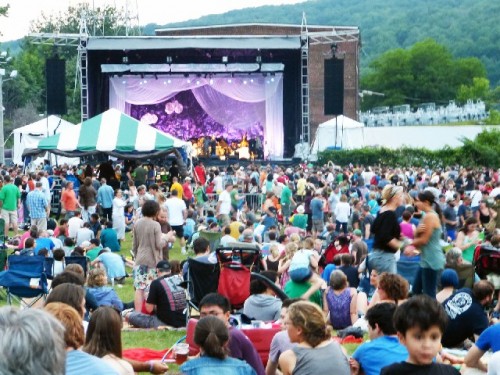 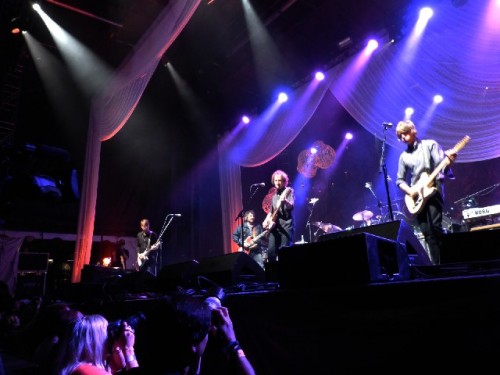 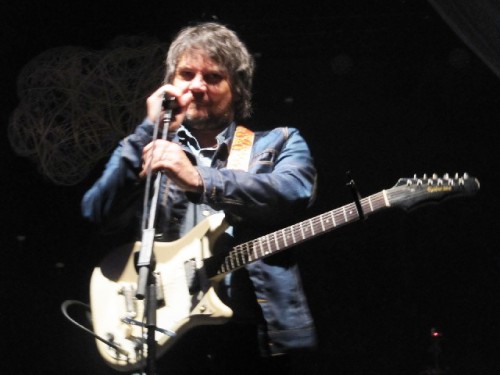 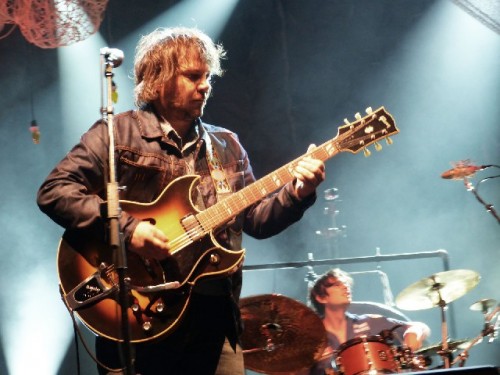 Leading the band through a set of 28 songs. 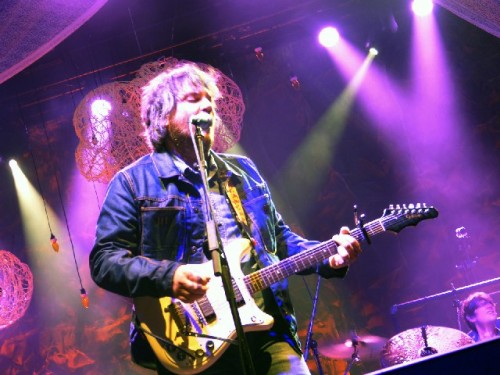 Shut up and listen. 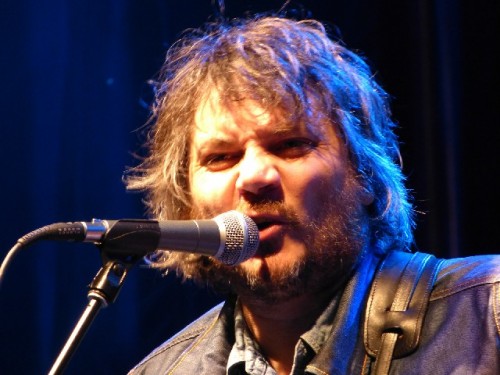 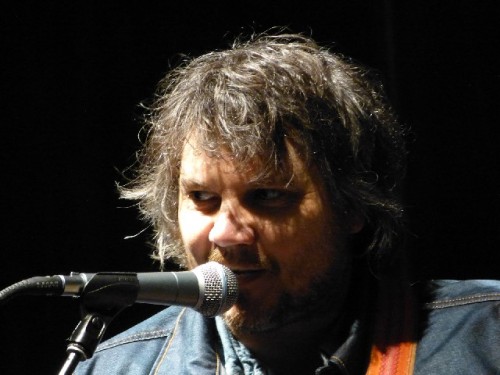 Asking if we’re having a good time every twelve minutes. 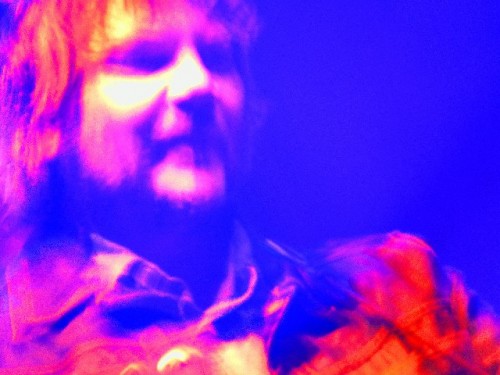 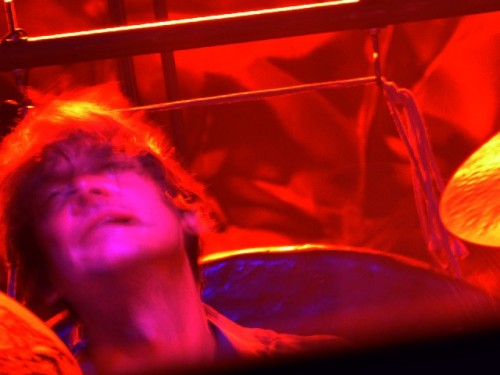 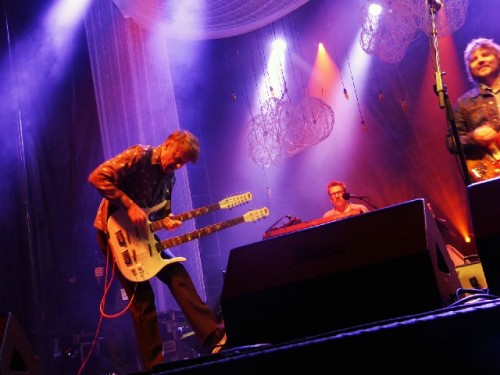 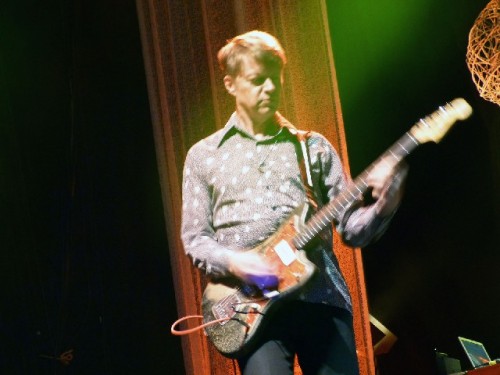 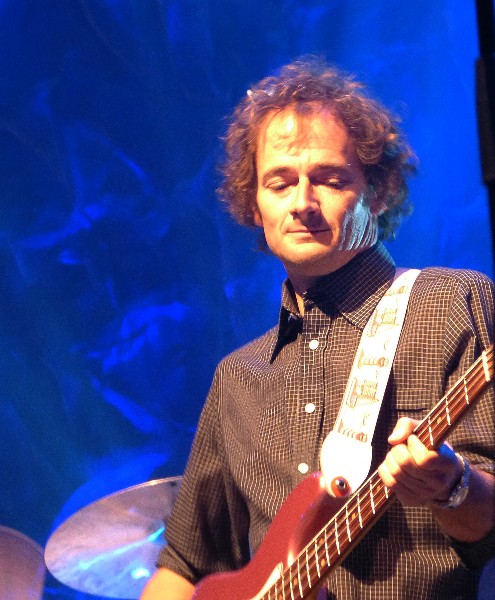 John Stirratt focuses on the music 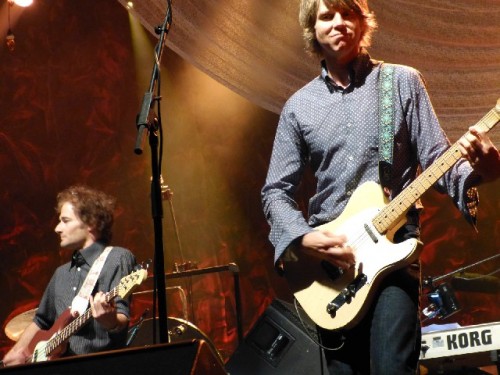 Pat Sansone on guitar and keyboards. 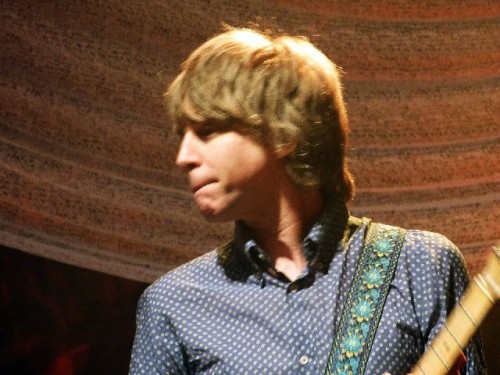 Yesterday, Mass MoCA was showing the wear and tear of its third, largest and most successful Solid Sound Festival.

The museum’s basement rest rooms were out of order. But as frequent visitors we knew where to find alternatives and avoid the porta-potties. Some of the concessions were running low on food and the selection of designer beers.

The museum was hosting its largest ever event.

While there are no official numbers as of now the estimates put the attendance yesterday above 8,000 and pushing higher. That’s up by perhaps double from Friday night.

Looking about the much more densely packed Joe Thompson field it seemed that the crowd approached that of a sell out for a James Taylor concert at Tanglewood. At full capacity the Lenox home of the Boston Symphony Orchestra caps at 12,000.

With Tanglewood offering popular music programming head to head- Melissa Etheridge, a Jerry Garcia Tribute, and Joan Baez this afternoon-  Mass MoCA drawing on a very different audience, more than held its own.

This sets a new benchmark for mega-music in the Berkshires. Significantly, Wilco performed at Tanglewood, sending the fear of God through defenders of its hallowed ground, before being welcomed in a long term arrangement with Mass MoCA.

The contemporary art museum has demonstrated that it is capable of playing in the  big league festival circuit.

Die hard Wilco fans, including many families with toddlers, gathered from far and wide for three days of love, peace and happiness. Where have I heard that before?

But more than just Wilco the fans were introduced to many up and coming bands. Some ‘too good’ according to Wilco front man Jeff Tweedy whose band is pushing 20. From the stage he commented on how the band had so enjoyed meeting many new musicians. Introducing himself to some emerging artists he said “Hi, I’m Jeff.” The response was “Great man, who are you?” Tweedy informed us that “We threw them out.” Just kidding.

He can be a salty host. Early on in the set fans asked to turn up the volume. He responded, “Shut up and listen. If you stop talking the music gets louder.”

When the audience settled in, some getting more and more blasted on weed and frequent trips to the beer concessions, the band gave a rich and full set which including encores, ran to 28 songs.

They performed: I Got You (At the End of the Century, Dawned on Me, Box Full of Letters,  At My Window Sad and Lonely,  Forget the Flowers, (with Julian Lage)  She's a Jar, You Are My Face, One Sunday Morning, Art of Almost,  I Might, Summer Teeth, Candyfloss,  I'm Always in Love,  Sunken Treasure, Far, Far Away, Via Chicago, Impossible, Germany, Born Alone, Laminated Cat (Loose Fur cover), Passenger Side, Whole Love, Can't Stand It,  I'm the Man Who Loves You, Encore: A Shot in the Arm, California Stars  (with Julian Lage), Just a Kid, Dreamer in My Dreams.

As they had the night before the audience sat back and listened intently to the poetic lyrics and Tweedy’s sweetly seductive delivery of material which is provocative, and drawn from life experience.

The dude seated next to me, a beer in each hand, alternately sang along while offering a sharp running commentary. When Tweedy asked “Are you having a good time?” Adding that he will ask that every twelve minutes my neighbor said “That’s the limit of your front man chops.” After a poignant tune he commented “Way to go Jeff, another song about heroin and domestic abuse.”

In a crowd pushing 8,000 plus you can’t please everyone.

Some fans were having such a great time that they just couldn’t stay awake. A kid near us just keeled over and passed out with a balletic swoop. Seemingly comatose I was concerned. What if he was going to OD? Acting like an adult I went over to see if he was breathing. He was sprawled in a heavily trafficked lane and I asked if he could move? There was a beatific smile so I let him rest in peace.

That was, in fact, a very small minority. Tiny for an event of this scale.

Wilco draws a mellow audience which actually listens to their music which is at times a bit loud, experimental and raucous. Crash bam, blam in the middle of a ballad. Wilco, however, is not to be confused with Pink Floyd.

You might ask why a contemporary art museum is hosting a rock festival.

Near the back of the field was a cluster of folding chairs with a number of trustees.

We interacted with Nancy Jane Fitzpatrick the owner of the Red Lion Inn and manager of Porches next to Mass MoCA. We often see her at Tanglewood events.

From the board’s perspective the music event is introducing thousands of young people to contemporary art. During long days on campus, between sets, many visitors were exploring the galleries. A number of the Wilco members and their musician friends are also artists. So there is a natural synergy.

It is certainly a dramatic and inventive strategy for growing future audiences for contemporary art.

Other savvy museums may be well advised to borrow a page from the Joe Thompson play book.

Hey Wilco, thanks for the blast.