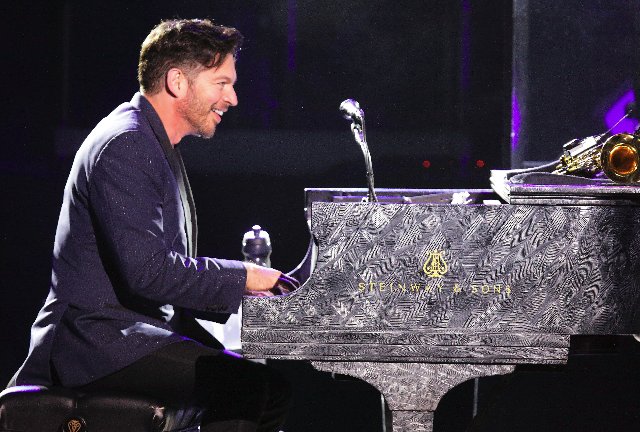 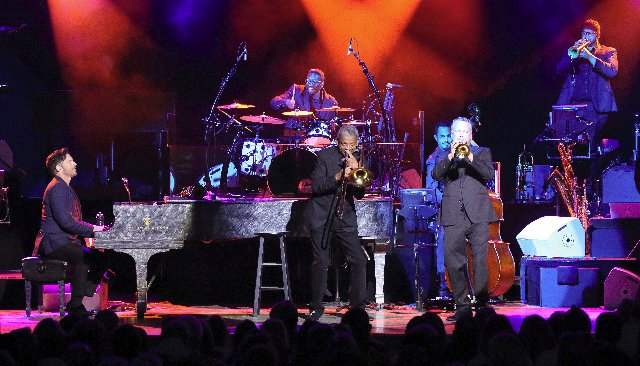 Now 50, Harry Connick, Jr. started at 5 and seemingly has done it all with 39 albums, numerous film and TV roles, as well as Broadway musicals. He has explored every musical genre from classical, pop and jazz crooner to funk.

At Tanglewood he sampled numerous musical styles with a musty New Orleans flavor backed by a sizzling 11 piece band. He went on promptly at 7pm and two hours later was asking rhetorically if we wanted to hear more music. Following a NOLA flavored romp through the audience he went on for another 20 minutes leaving the audience richly satisfied.

Few performers  can match his relaxed, down home, compelling manner. He easily moved from the piano where he led the band to roaming the stage. There were stories starting with his musical beginning in New Orleans as a toddler at age 5. By 7 he cut his first record raspy voiced in the manner of his idol Louis Armstrong.

Generously he shared the stage with musicians he described as the best band he has every toured with. This was the last night of a month long, 15 city tour. They seemed to be in the mood to celebrate. Think of a horse galloping back to the barn.

We much enjoyed his 2015 Tanglewood appearance but on so many levels this was more better.

It was an evening of roots declared by the opening tune “Let’s Go Down to New Orleans.”

On every level New Orleans, with its Creole heritage, is the most unique and richly flavorful city in all of America. It’s where jazz was born and music continues to inform the life of the Crescent City. The music is as richly diverse and flavored as  cuisine that is second to none.

Not just during Mardi Gras, when mayhem prevails, every day on Bourbon Street is party time. It begins in the morning as folks stagger out of bars to start the day with lethal Hurricanes.

As a prodigy Connick learned from the New Orleans “professors” and one summer was a student of classical piano at Tanglewood. Humorously he described being banned by a Russian born instructor because he played “The Devil’s music.” Not being included in the season ending recital he described organizing his own concert “In one of the buildings here.” He spoke of loving being on stage at Tanglewood.

Essential to the New Orleans tradition is a jazz funeral. On the way to the cemetery the coffin is accompanied by a slow and steady procession set to a somber dirge. Once in the ground the band, and its second line, honor the deceased with a celebration of life.

Remembering the dearly departed they performed the classic tribute “Oh, Didn’t He Ramble.” Connick and the band were just getting in a groove. That was taken up a notch with “Take Me to the Mardi Gras.”

Between songs there were anecdotal interludes. He described a tradition where youngsters were mentored and encouraged to sit in with bands. Because of the enormous diversity from Trad Jazz, to Gospel and Funk he got to sample every possible approach.

When he was just a toddler his parents asked if he would like to record and who were the musicians he wanted to play with. Like a kid in a candy store he asked for Ella for duets, and Buddy Rich on drums. They told him to focus on affordable  local musicians he knew and played with. In 1976 that resulted in “Dr. Jazz.”

On the PA we heard an excerpt in gravelly Satchmo style “Hello central give me Dr. Jazz.” Just a kid at the time he later learned the song was about a drug dealer. There were tailgate trombone licks from Lucien Barbain. It harkened back to progenitor Kid Ory with Armstrong’s classic Hot Five. He used plunger mute evoking the growling sound of Duke Ellington’s Cotton Club jungle bands.

He joined Barbian trading riffs playing trumpet. It was impressive to see his versatility but, at best, he is an average player. It was more about show biz as he sank to his knees with circular breathing technique and a long sustained high note.

Not everything comes through. There was a request to write songs for the film “Who Killed Roger Rabbit.” Some time went by and he didn’t hear from them. He called and asked if they liked his music? The answer was “No.” But he used the songs for an album from which he performed “We Are in Love.”

His father told him that Rob Reiner was on the phone. He thought it was a prank but this time an invitation for a film score panned out. With a big band he recorded standards for “When Harry Met Sally” (1989) which earned Connick his first Grammy.

From that best selling album he crooned “Our Love Is Here to Stay” and “It Had to Be You.” It underscored his prowess as a jazz vocalist.

There is a long line of legendary New Orleans pianists from Jelly Roll Morton and Lil Hardin Armstrong, Fats Domino, to Allen Toussaint, Dr. John, and Professor Longhair. To demonstrate Connick played a medley that conflated disparate material including a riff on “Hungarian Rhapsody.” In the Library of Congress interviews with Alan Lomax the legendary Jelly Roll demonstrated how classical music morphed into “Tiger Rag.” Scott Joplin composed the ragtime opera Treemonisha in 1911.

In particular he recalled being tutored by James Booker. He would come unannounced including times when Connick was home alone. Using his left hand he demonstrated stride style. There was the usual one and then with Booker's embelishments. When visiting he requested a tumbler full of whiskey. It seems that the pianist suffered multiple afflictions as a gay man, and aloholic/ addict suffering mental disease. He talked of love and gratitude growing up in a home without prejudice. In tribute to his mentor Connick performed "Hear Me in the Harmony."

Musical eclecticism is what makes the music of New Orleans so intriguingly diverse. Stir ingredients in a pot, add spice, let it simmer. and serve as musical gumbo.

While he enjoys diversity, Connick commented, that nothing reaches people more deeply than Gospel music. It’s isn’t just about faith. To make this point a sensational guitar player, Johnathan DuBose, Jr., was featured. His first piece was performed at blistering speed with inventive wah wah accents. Connick had him stick around for a slow, reverent duet of “How Great Thou Art.”

In 1990 he met and married Jill Goodacre with whom they have three daughters. Because she was from Lubbock, Texas she was initially turned off at the prospect of sucking the head of a boiled crawdad. Now, for a family party he boils 60 pounds just for the five of them.

In tribute he sang the poignant and loving song for his wife. It has a refrain “You’re one fine fine thing" which featured alto flute.

He talked about playing lead on Broadway in Pajama Game for which he was a Tony nominee. After a piano solo he crooned “What a Wonderful World” a hit for Armstrong in 1967.

As a member of the Broadway community he met many wonderful and talented people. One of them, Pete Benson, was in the audience.

He asked for his tap shoes and took a few warmups. Then he brought out the sensational Mike Hawkins. There were some call and answer exchanges. But it was soon evident that Connick couldn’t keep pace. He deferred Hawkins to trading riffs with Arthur Lantin the drummer. That yieled to Hawkins flat out flooring the audience.

Referring back to a New Orleans funeral the band paraded through the audience with “Saint Come Marching In.” A barrage of cell phones lit up the Shed as frenzied fans grabbed shots of musicians titubating through the aisles.

Connick and his band ripped the roof off the Shed with a rip snorting finale. The aisles were clogged and the audienc was on its feet cheering with excited energy. When the band settled back in their seats they stompled through an Allen Touissaint NOLA standard “Yes We Can Can.” It has an infectiously catchy rhythm.

Making our exit music resonated with us. By then we were as stuffed as a meal at Acme Oyster House. God only knows how much we need more NOLA in the Berkshires.

What a  wonderful infusion of  Laissez les bons temps rouler!