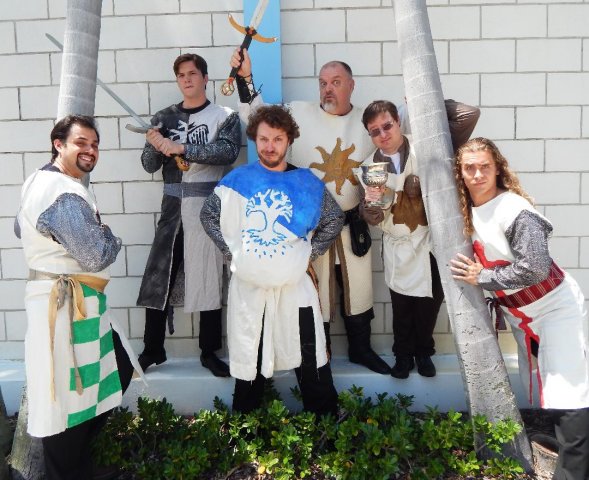 It is a sheer joy to watch promising young actors share the stage with seasoned performers.

Surely, the latter can provide their younger counterparts with many pointers about the art of acting and knowledge about live theater in general. Of course, this bodes well for the future of the art form, and its stars of tomorrow.

Obviously, the semi-professional South Florida-based Entr’acte Theatrix is one company that wants a bright future for live theater. For proof, all you had to do was glance at the program for its lively, but uneven production of the unapologetically silly and super popular Monty Python’s Spamalot. Some cast members possess extensive experience. Others are talented, but less experienced.

Certainly, at least two cast members are performers from whom to learn. They are Troy J. Stanley as King Arthur and Kalli Courakos as Lady of the Lake. The pair have performed at such respected theater companies as Palm Beach Dramaworks, Slow Burn and the Wick Theatre.

Courakos commands the stage without overshadowing her castmates. She is confident, sexy and sparkling.

This seasoned performer possesses the requisite strong, versatile voice required for the role. In addition, she displays an impressive ability to growl while maintaining deft vocal control.

Courakos portrays the Lady of the Lake as an unmistakable diva. In particular, she might remind you of Mama Rose in Courakos’ rendition of “Whatever Happened to My Part.” She spreads her arms out wide as though she’s trying to call her attention to herself, which is appropriate for this song.

Meanwhile, Stanley’s performance is equally strong as King Arthur in the less showy, yet meaty role. The performer imbues His Highness with quiet honor and polish, yet he can turn thunderously angry and commanding when others forget he is, after all, king.

Courakos, Stanley and their castmates generally possess comedic skills, physically and verbally. Their comic timing is solid, as well. However, timing is a weakness in some areas. For instance, the performers need to wait for applause and laughter to completely stop before continuing with the show.  This will ensure that we can hear every irresistible sung and spoken word within this typically Pythonesque laughfest that turns low comedy into a work of art.

True, some performers act and sing better than others. But again, the work that the talented, but less experienced actors’ put in with the veteran performers should improve their skills.

This much is certain. The entire cast appeared to enjoy themselves immensely while entertaining the audience. Speaking of the spectators, their knee-jerk reactions were hardly not surprisingly. After all, which Python fan wouldn’t instantaneously laugh when faithful servant Patsy (Greg Halmos) repeatedly clasps coconuts rhythmically, in full view of the audience, to suggest the clopping of a horse’s hooves?

Another comedic delight is the French taunter, whom Carlo Sabusap plays. He speaks, or rather taunts, in a high-pitched, silly voice without grasping for laughs. He makes the taunter’s silliness organic to his character. Also, Sabusap’s French Taunter butchers his English so comically bad that any teacher of the language would grit her teeth while covering her ears.  This performer doubles as a “Knight of Ni.” In that role, he appears to torture King Arthur and Co. In fact, it’s almost as if someone is pricking them with a pin each time they hear “Ni.”

More pleasantly, as Sir Robin, Christian Ortega is nimble on his feet during the number “Brave Sir Robin.” And the actor endows his character with a fearless persona while speaking and singing in a strong voice. More impressively, Ortega doesn’t stumble during the patter song, “You Won’t Succeed on Broadway.” However, his timing with the orchestra during the number could improve.

Speaking of the musicians, they sometimes drown out the performers. Further, the performers’ microphones work sometimes, while at others, they malfunction.

But if you want to look on the bright side, as the characters do, there’s plenty to admire. In addition to some quality, high-octane performing, including the anachronistic, Vegas-style showstopper, “His Name is Lancelot,” the technical team mostly shines. That is literally the case in the costume area, with Lady of the Lake’s sparkling outfit. It perfectly matches her character. Also, in the lighting department, the design enhances mood and adds intensity as well as focus, when needed.

While this production isn’t the most polished mounting of Monty Python’s Spamalot, credit Delray Beach-based Entr’acte Theatrix with a solid, thoroughly entertaining and hilarious evening of musical theater.

No doubt, like Sir Robin, these up and coming actors have done more than “found their grail” in live performance. They obviously possess enthusiasm, talent and you never know what they might accomplish. Just look at company alum Ruthie Ann Miles – she won a Tony Award for best featured actress in a musical for her performance in The King and I.

It marked her first Broadway show.