An Update and Controversy 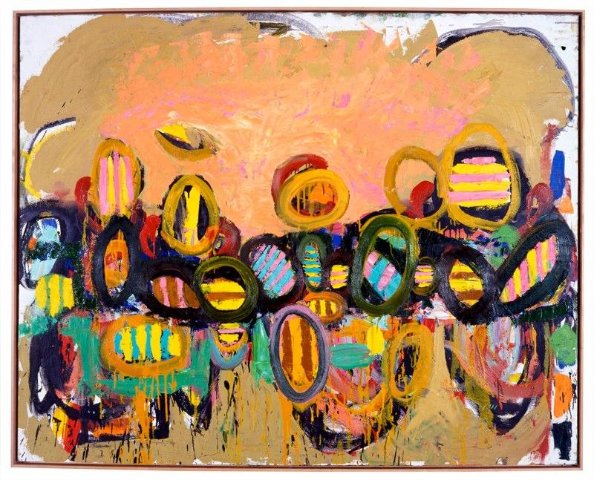 When I first wrote about Zombie abstraction in December 2013 several months before the concept achieved notoriety in Walter Robinson's now famous essay on Zombie Formalism, I got a blowback in a comment on my Zombie blog from artist Craig Stockwell that insisted that my difficulty with this sort of painting was unfounded and that the artists grouped together initially by John Yau in Hyperallergic were just expanding the language of abstraction. They were quoting the past but not deflating it.

When I noticed that Craig was currently quoting color field stripes in his work, I reached out to him and sent him a painting I did from the late 90's first shown at Crieger-Dane in Boston that included quotations of colorfield stripes. I acknowledged that there was nothing  zombiesque in the work but like Stockwell's work it was playing murkier notions of color with the bright electric color of optical/color field art. On twitter I made the same critique of Peter Halley who makes outlandish statements about his work and technology. I found him just expanding the level of energy and in so doing expanded the vocabulary of painting in general.

I sent the image of "Mulch"  to Jay Clifford, an artist who works out of Worcester. Since he first commented on my Tim Nichols blog some years ago we have been exchanging emails about our work and the current art scene. His response is below. Its free associative style revealed some new insights into the work as well as confirming the playful nature of the work.  I insisted I quote it unedited.

"....wow its materializing and dematerializing at the same time.  It’s like star trek and maybe there is a problem with the transporter and people  can’t quite come back or get sent out either.  I can see why Ronnie liked this.  Its like the painting itself isn’t fully there either like its a fading memory itself or an incomplete or uncompleted memory or an absurd memory or memory of absurdity or an absurdist reconstruction of memory.

There is something Hanna-Barbera about it like a surreal approximation of the  flintstones, Yogi Bear, The Jetsons, Wacky Racers, Scooby-doo.

The constructed cartoon reality we had as kids we lived in that tv land was our neighborhood and then we moved on, grew up but where did this place go it's still there somewhere in our memories.

Our adult rational selves feel shame that we lived this crap but it was our youth; it was us. We had no choice but to go this route of cartoon hollywood nonsense.We were seduced and we were not fully developed mentally to know we had a choice to not go there like we did.

Kids want to be happy and entertained and that level of experience purity is unattainable later in life.  The pure state of childhood mesmerization and complete alignment is never achievable to that extent once we grow up. Our formative years are based upon cartoon nonsense.  Our adult selves are skeptical, critical, jaded.  We have been lied to  and abandoned in time really by this hollywood constructed reality factory.

The pure state we experienced was lie, a fabrication , hand painted film stills linked together that are fused in memory and its complete nonsense viewed through our adult mind.  The dreamy memory of childhood entertainment we had is lost and critiqued and we were brain washed indoctrinated to be receptive to the fabricated lie.

The adult self can not fully reconstruct this time because of the adult awareness and critical mind. This painting is the inability of our adult selves to reconnect to our former child selves and there is a permanent disconnect between the two. There is an incomplete connection not fully materialized but not fully erased. There is cognitive dissonance, interference, static, poor reception like on the tv in the old days when it was raining or snowing and you’d move the rabbit ear antennas around trying to find the signal.

Inside of the cartoon bubbles is the history of art that too has been critiqued and devalued and is relegated to the visual scrap heap with the lost episodes of the flintstones.

The adult critical mind rejects everything but still maintains belief in purity in the possibility of pure belief, experience, alignment and visual representations of that ideal.

This could be a film still or sorts of awareness and rejection, of reevaluated experience. It ironically is complete and pure and beautiful.  Maybe somehow you have found a way to representationally reconnected to the pure state of alignment of our lost child selves via the painted approximation of the cognitive dissonance of awareness."