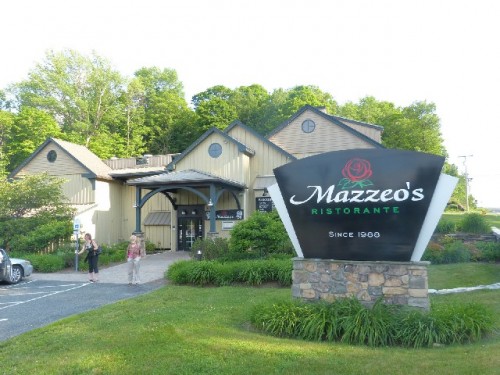 The large restaurant venue has gone through a number of incarnations over the past few years. 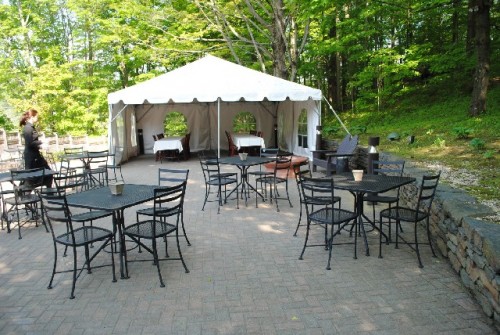 A view of the terrace. 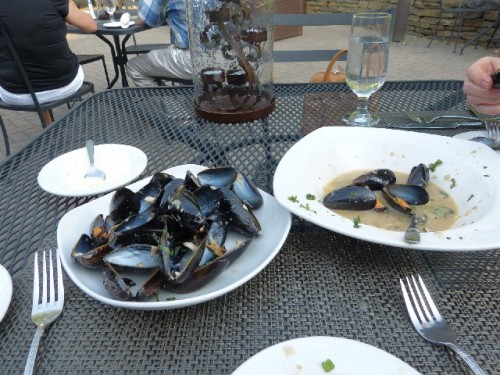 We dispatched a wonderful and generous serving of mussels. 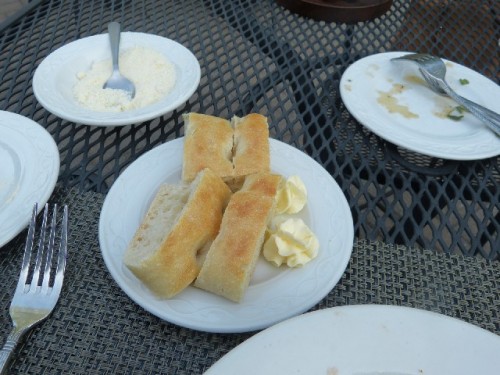 The focaccia was fresh but there was no gluten free option for bread. 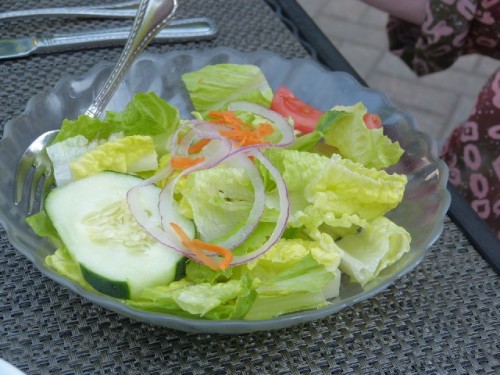 A fresh salad with dressing on the side. 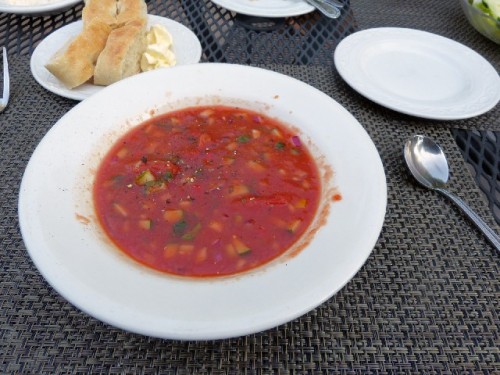 The gazpacho was created with canned tomato juice and chunks of strewed tomato. 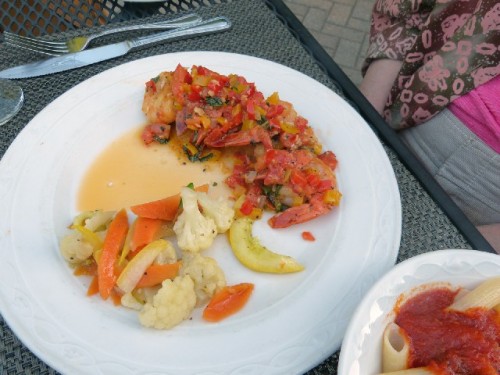 A pleasing presentation of shrimps with steamed vegetables. 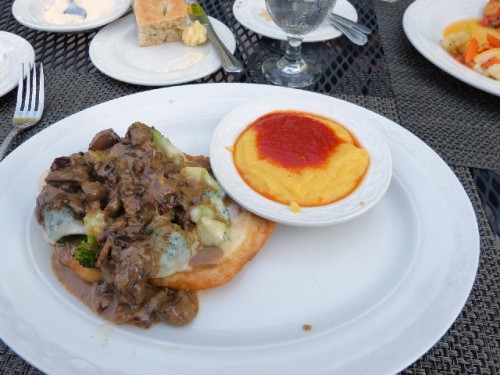 The presentation of chicken lacked finesse and imagination.

Driving by on South Street between Pittsfield and Lenox the vast parking lot of Mazzeo’s Ristorante is always packed.

That’s an indication of its popularity as a destination for Italian food at moderate prices from an extensive menu.

The restaurant, which has been a great success since its founding in 1988, has relocated to a larger venue which has gone through a number of incarnations over the past decade.

Given its large scale and expense of operation the venue, while having a great location and access, has struggled to find the right combination of quality and price. We had visited previously but found it too expensive for what we were served. Apparently, we were not alone in that opinion.

Because of the seasonal nature of business in the Berkshires restaurants have a hard time struggling through long winters.

Emerging from an afternoon concert at Tanglewood at 5:30 pm the restaurant was not yet busy.

It was a scorcher and there was the option of air conditioned interior or dining on the attractive terrace. There was also the inducement of a musician performing pop standards.

The terrace proved to be an excellent choice as by early evening the heat gave way to a pleasant breeze in the shade. We had our choice of seating as tables soon were taken by other diners.

Arriving early we found a number of wait staff on hand and anticipated prompt service. One lad who was bussing tables was trailed by a teenager shadowing on his first night.

Our waitress was attractive and efficient. But she ran through the daily specials way too fast to absorb the content particularly with the distraction of live music.

We ordered “Cozze or Vongole  Fra Diavalo - Fresh mussels or clams  in your choice of sauce:  Tomato and basil sauce or White wine garlic sauce $10.” It is one of our favorite dishes and we prefer the wine and garlic preparation.

They arrived after what seemed like a longer delay than necessary given that the kitchen was not  particularly busy. There was fresh foccacia for dipping but no gluten free option.

There was a delay then soup and salad followed by another long interval.

People who ordered after us were served and on their desserts before we started entrees.

Flagging down our wait person I asked about our main dishes. There was an apology as she said that they serve one course at a time. But we were not asked about the sequence and timing of our meal. That’s a norm for servers. Particularly at better restaurants.

Astrid reminded me that we were not in a hurry. Indeed we were much enjoying the pleasant ambiance and balmy night air.

Not in a rush we discussed our meal.

We agreed that the mussels were fabulous. She said that “For $10 there were enough for two to share. The white wine sauce with garlic, onion, basil was thick so I assume there was some cheese as it was quite salty. Perhaps a bit of cream. It was served with focaccia. Although they gave me a gluten free menu, when I asked, there was no alternative to wheat bread for dipping in the sauce.

“Many of the dishes on the regular menu were also offered gluten free.

“For a main dish I had ‘Gamberi Soffritti - Sauteed jumbo shrimp with sweet peppers, garlic and fresh herbs $22.’ The shrimps were served under a mélange of small pieces of sautéed red and yellow sweet peppers. The fresh steamed vegetables finished in butter were very nice. The six shrimps were beautifully presented with gluten free pasta on the side. Their marinara sauce is fresh and light.”

Then it was my turn.

For me the gazpacho was a disaster. It wasn’t cold enough. The recipe calls for fresh diced tomato and these were out of a can, including lumps of stewed tomato. Gazpacho should feel fresh, light, and summery and this was more like tomato juice, too much olive oil, with no texture or flavor. The recipe calls for a puree and this was just a base of generic tomato juice.  There wasn’t a strong presence of the ingredients from sweet pepper to cucumber. Clearly it was prepared by a chef who has never visited Spain.

The restaurant states that it is best known for its “Parmigiana - Sauteed breaded chicken breast, breaded sliced veal or eggplant topped with mozzarella cheese and marinara, then slowly baked Eggplant $17 Pollo $20 Vitello $25.”

Since that is such a common preparation I opted for something that would give a better sense of the range of the menu. I always like “Saltimbocca - Sauteed Chicken or Veal topped with caramelized onions, prosciutto, sage and swiss cheese  served with a sherry wine sauce Pollo $20 Vitello $25.” But I was undecided between that and “Antonio -Sauteed Chicken breast or veal topped with prosciutto, broccoli and provolone served with a mushroom cream sauce Pollo $20 Vitello $25.”

I asked the waitress and she strongly recommended the Antonio. In hindsight I should have opted for the Saltimbocca or played safe with Parmigiana.

Again the entrée was a disaster. The chicken cutlet was tough and not crispy. It was covered with over steamed broccoli which had no crunch or texture. I never really tasted the prosciutto which was buried under chunks of Portobello mushroom.

The presentation was not up to the claim of Mazzeo as a Ristorante. It was more what one might expect, other than the price, at a Trattoria. The designation Risorante is reserved for a restaurant that serves upscale, elegant and pricey Italian food. Given the size of the menu and high volume turnovers of tables there isn’t that level of attention to detail.

On the platter it was unattractive just a big brown mess of food. The side dish of polenta took up half of the platter. As Astrid suggested that should have been placed on the side and the plate might have had a garnish of flavor and color as did hers. The dish had quantity but lacked quality. A better kitchen would have opted for mushrooms more delicate and exotic than Portobello.

For the average diner and tourists it is understandably a popular and enjoyable destination. On a return visit I would try the freshly made pasta and other enticing menu items. Astrid said “I will come back but not so quickly.”