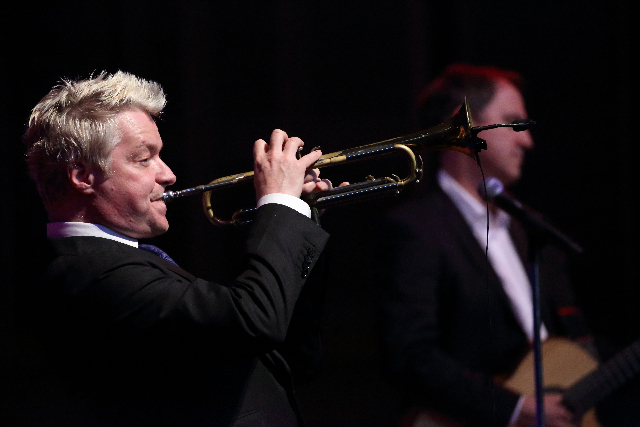 Chris Botti at Tanglewood. Hillary Scott photos for the BSO. 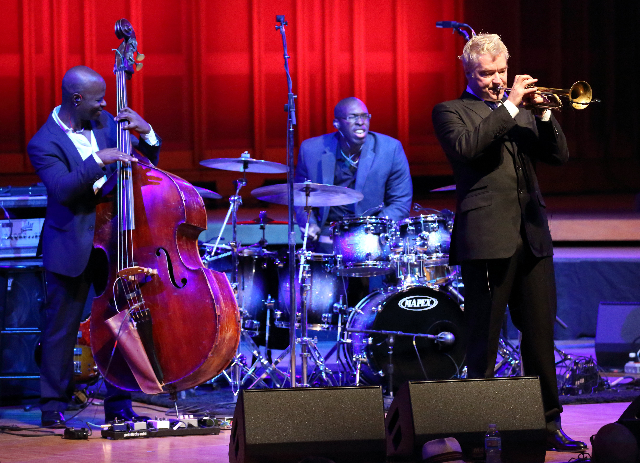 Botti with Richie Goods on bass and drummer Lee Pearson.

When Chris Botti plays it straight he is among the elite trumpet players of his generation. He is noted for rich, lush, perfect tone.

While identifying himself as a jazz musician his eclectic range runs from opera and classical music to pop and kitsch.

All aspects of his awesome talent and excess of showmanship were evident last night in sold out Ozawa Hall. On the open end the audience spilled out on the lawn enjoying a perfect summer evening.

This contrasted with the downpour during his last Tanglewood appearance in 2012.

Yet again Botti, who performs some 250 gigs each year, showcased superb musicians.

At times he stepped back and allowed for extended solo performances. This featured the remarkable ability of the musicians but also allows for resting his chops. Particularly at mid career and beyond trumpet is a brutal instrument with its demanding embouchure.

Early on, for example, Louis Armstrong was noted for ripping off a relentless number of High C’s during performances. While on tour in England he split a lip and from then on had to take more care with a greater emphasis on singing, patter, and showmanship.

Now and then Botti did cruise the musical stratosphere but sparingly. There seemed to be more of an emphasis on mid-range, moody, whole tones and melodic selections.

Occasionally, he let it rip with an astonishingly capable rhythm section. The best moments of the eccentric program occurred when the musicians were reduced from six to four including Botti, pianist Taylor Eigsti, Richie Goods bass and Lee Pearson, drums.

There was evident ecstasy when they played with post bop intensity. They drove Botti to crank it up however briefly.

Including his engaging but self-effacing interaction with the audience often Botti assumed the role of ringmaster of what he himself described as “You came for a jazz concert and ended up with Cirque de Soleil and Led Zeppelin.”

This circus like shtick was all too evident with the over the top inclusion of the very young, petite, pretty, and talented violinist Sandy Cameron. With a bare midriff, attired in ballooning harem pants, she seemed more like a belly dancer or character from Arabian Nights than a classically trained violinist.

While virtuosic as a twenty-something her over-the-top, balletic and acrobatic performance drew more attention to her movement than focused on the music.

That seemed to suit Botti just fine as the successful artist knows his audience. That was reflected when he asked rhetorically how many in the audience were attending their first jazz concert? Looking about at the elders, with few if any hipsters in evidence, his sarcasm was well taken as they sucked up the show biz pap.

This approach undermines his status with the mainstream jazz world but one assumes that Botti laughs all the way to the bank.

There were indications, however, that he strives to be taken seriously by those with more discerning taste.

Opening the evening, for example, was a lush and lovely Spanish themed piece that referenced Miles Davis and his seminal recording based on Rodrigo’s Concerto for Guitar and Orchestra in the Gil Evans arrangement of “Sketches of Spain.”

In a more subdued approach Cameron  nicely provided a thumbnail of the orchestration. The acoustic guitar passages were impeccably performed by Ben Butler.

From there Botti fell into the standard “When I Fall in Love.” It started at a melodic tempo then kicked into a romp. It was the first taste of that stompin rhytyhm section with a nice solo by Eigsti. That slipped into a riff on another Davis bop standard “Moanin.”

The jive, mostly lost on the audience, was there for those hep to it.

Having given us a taste of bop there was a return to the comfort level of the audience.

From his Chris Botti in Boston CD he featured Cameron on the evocative ballad “Emmanuel." There was a lovely tone as Pearson deftly accented the beat with soft mallet strokes.

Stripped down to a quartet the group started with a lilting tempo for “You Don’t Know What Love Is.” At the bridge they launched into a brisk tempo driving Botti into that signature High C finale.

Stepping back he introduced the stunning bass solo of Richie Goods. After exploring all of the possible dimensions of acoustic bass the other cats fell in to take it out.

That was followed by a surprisingly enervating duet with Butler. Botti put a Harmon mute into his horn for a subdued but unevocative treatment of the Leonard Cohen anthem “Hallelujah.” Botti didn’t seem to know what to do with the piece.

Then the circus master left the stage and prowled the aisle while fans went nuts with their cell phones. In a vamp with the audience he encouraged this paparazzi mode and even interacted humorously with a front row fan blatantly videotaping the concert.

From a side door he was joined by a superb singer Sy Smith. She then joined him on stage with “I Can Hardly Wait To Have You in My Arms.”  That evolved into vocalese as they traded riffs. Then they camped as side-by-side he blew trumpet while she manipulated the valves.

That was followed by Cameron’s turn in the solo spotlight which was an exercise in blatant, crowd pleasing, excess. She ended her bit in a Statue of Liberty pose with an arm thrust into the night air with a bow instead of a torch. It was a classic stadium rock move.

Following this embarrassment Botti made the remark about Cirque de Soleil with a Led Zeppelin twist. He added comments that the easy on the eyes violinist is inspiring him to take up yoga and loose weight.

Highlighting another best selling CD, and collaborations with David Foster, he featured the title tune “Italia.” The recording included the Italian singer Andrea Bocelli. With a quip that he speculated that the tenor couldn’t catch a direct flight. In an ersatz Italian accent he introduced the tenor George Komsky who was thrilled to make his Tanglewood debut.

Then in an aside Botti reflected that his Italian accent sounded more like Putin. Which may have been a Freudian splip because the singer is from the Ukraine rather than Italy.

Unfortunately the game but lame performance evoked a poor comparison to Bocelli. The singing by Komsky was barely adequate.

Nearing the end of the performance drummer Lee Pearson was featured. Earlier in the program we were stunned by the ability of one of the most gifted percussionists of his generation. During those too brief jazz numbers you were reminded of the bop master Max Roach. With the solo performance I recalled the trickery of the facile Buddy Rich.

Pearson put on a clinic of jazz drumming. He worked with a basic kit augmented by two tom tom drums. There were six cymbals in addition to high hat, and different toned ride cymbals as well as a couple of splash and crash cymbals. He worked them all adroitly.

As we were drawn in by the performance he seemed be having a conversation with the talking drums. He poetically conversed with us in the language of evocative rhythm.

At the end of a particularly intense passage he has a habit of briefly standing. The audience took that as a cue for applause. But then he would take another turn and then another.

By the end of the solo he had thrown in every trick in the book and then some. Taking a riff from Hendrix he played behind his back first with one arm and then with both. It was an unprecedented feat of dexterity. He abandoned the sticks and played drums with his hands including clapping and mojo hand jive.

In the spirit of the excess of the Botti approach he went too far with a bit about balancing a stick on his head. It was difficult whether he was mocking himself or the audience.

Often Botti, Goods and Pearson exchanged knowing glances and  inside jokes about selling out and conning the squares. Nobody seemed to notice.

Sure the audience loved it. But I would treasure the opportunity to hear a concert of this truly gifted ensemble playing great jazz straight no chaser. By the end of the evening I was dragged by all the clowning around. Basta to the shuck and jive.

No wonder there were no hipsters in the audience.