The BSO Season at Tanglewood 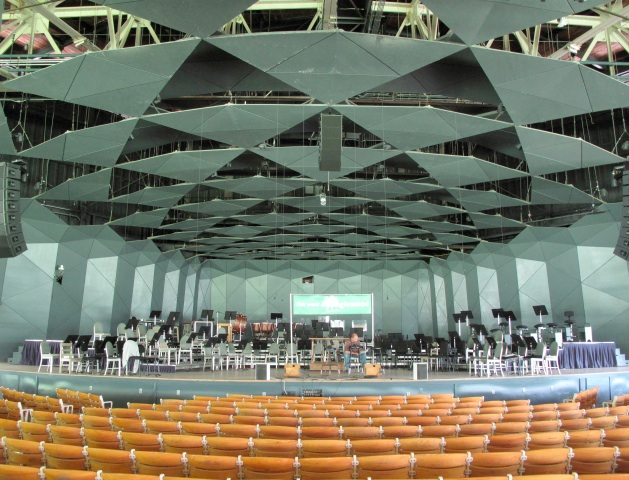 Whisper the name "Tanglewood" and you will tickle the conscience of the novice classical music-goer, and fire the memories of those who have walked its grassy paths and visited the summer home of the Boston Symphony Orchestra. Located on a sprawling estate in Lenox, Massachusetts, this is the Cadillac of summer festivals, offering symphonies, chamber music and opera to a throng of devotees who make the pilgrimage again and again.

This year's Festival shows the Boston Symphony Orchestra purring along under the leadership of the fiery Andris Nelsons, and playing for the energetic young Latvian conductor like a house on fire. Here are the highlights of a busy Tanglewood summer season.The Festival opens on July 7th with a performance of Gustav Mahler's Resurrection Symphony in the Koussevitsky Concert Shed, the fan-shaped airplane-hangar like building that, whatever its physical flaws, is blessed with marvelous acoustics. Buy a seat or sit on the lawn and listen to the performance amplified, a cheaper option for the more casual concert-goer.The next week, (July 15th) Nelsons unleashes a rare Tanglewood performance of Wagner's Das Rheingold, the opening Preliminary Evening of that composer's mighty Ring Cycle. Rheingold (and the performance of any opera in the Ring) is an occasion, and Nelsons has assembled a strong international cast, led by bass-baritone Thomas J. Mayer as Wotan and Kim Begley as Loge.One of the most interesting solo programs deserves a tweet. On July 27, Pierre Laurent-Aimard will play a program titled Birds in Music featuring bird-inspired works by Schumann and Ravel. The concert ends with excerpts from Messiaen's Catalogue d'Oiseaux, interpolated with electronic compositions by Bernard Fort using the actual bird-songs that inspired Messiaen's piano pieces. On July 29,  a Stravinsky rarity: the recently rediscovered Chant funebre that the composer wrote for the death of his mentor Nikolai Rimsky-Korsakov. This concert, conducted by Charles Dutoit also features the Tanglewood Festival Chorus in Berlioz' weighty Te Deum.

On August 9, the venerated Haydn and Handel Society travel east from Boston to perform Henry Purcell's The Fairy Queen, an idyllic and marathonic adaptation of Shakespeare's A Midsummer Night's Dream.

The grounds of Tanglewood offer more than just the big BSO concerts. There are orchestral concerts by the Tanglewood Festival Orchestra, student musicians at the estate to engage in intensive summer workshops. There is chamber music. There are choral programs. And there are guest appearances from starry international soloists. This summer's roster includes the Emerson String Quartet,  pianists Garrick Ohlsson and Emanuel Ax and the celebrated cellist Yo-Yo Ma.

Starting August 10, Tanglewood opens its Festival for Contemporary Music offers a compelling mix of new compositions by contemporary bigwigs. Pieces by David Lang, Dai Fujikiraa, and Thomas Adés are among the attractions. There are also selections from older 20th century composers, some of which are edgy indeed. Music by Sofia Gubaidulina, Harrison Birtwistle, Terry Riley and György Ligeti will be featured in these concerts.

On August 11, the orchestra offers a rare performance of Brahms' Double Concerto with a stellar pair of soloists: violinist Gil Shaham and cellist Alisa Weilerstein. This concert concludes with Stravinsky's most radical creation: the raucous Rite of Spring.
Simon Boccanegra, La Traviata, Eugene Onegin and other operatic favorites.

There's plenty more, but we're out of space. Information on getting to Tanglewood is available onBSO.org as well as a full listing of the festival season.  (Reprinted by permission of Superconductor.)