Cat on a Hot Tin Roof in Stockbridge 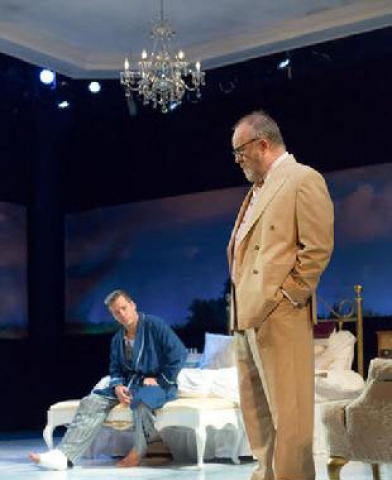 Brick and Big Daddy (Jim Beaver) have a contentious father and son dialogue.

A masterpiece by Tennessee Williams Cat on a Hot Tin Roof is a relatively long, complex and challenging play. It is being presented in three acts by Berkshire Theatre Group.

With a surprising event it actually entailed three intermissions. Just as the second act was getting underway a bat began to circle the large open space of the theatre. The actors were stunned and some cracked up laughing.

In a rare move artistic director Kate Maguire announced a break hoping that the critter would exit the theatre. Eventually the play continued without a hitch.

Perhaps the unanticipated break was a good opportunity to clear our heads and refocus on a production that until then was uneven and less than comprehensible. There are workable elements but as directed by David Auburn there needs to be more focus on creating convincing and compelling cohesion.

In the classical Greek manner the events of the drama, in this case the 65th birthday celebration of Big Daddy the patriach of a prosperous Mississippi plantation, occur in the span of a day. The elephant in the room is that his body is riddled with terminal cancer. He fears for the worst but hopes for the best.

The deception, at least for the moment, is that tests have come back with a more benign diagnosis of spastic colon. This is what he has been led to believe. With varying degrees of conniving, however, family members with the exception of Big Mama (Linda Gehringer, know otherwise.

The drama hinges on the inevitable reversal when the cat, so to speak, is out of the bag or jumps off the eponymous hot tin roof. That metaphor appears several times in the script.

During an exchange with his alcoholic, former star athlete son Brick (Michael Raymond-James) suggests and then Big Daddy also smells mendacity in the air. This occurs in the second act which is dominated by their interaction. It is later uttered as an accusation when the entire clan gathers in the third act but the perennially pregnant Sister Woman (Jenn Harris) states that she doesn’t know what that means. The word is defined as untruthfulness, a tendency to lie.

With self absorbed apathy the pathetic Brick, intent on drinking until he feels the “click” in his head that signifies relief from misery, is the only truly honest character in the play. He harbors no ambition to inherit the sprawling farm and other considerable assets.

That appears to be the full time job of everyone else in the family other than Big Mama who would like to maintain control, first as wife, and then as widow.

Brick’s gorgeous and sexy wife Maggie the Cat (Rebecca Brooksher) portrays one of the paradigmatic female roles in contemporary theatre. A successful production hinges on a fabulous Maggie. It proves to be a fatal flaw in this production.

The first act is dominated by the bedroom scene between Brick and Maggie. There needs to be a cat and mouse, ebb and flow as reasons for the rocks in the marital bed come to light. Instead of an arc the performance of Brooksher is a blur delivered with shrill intensity.The actress fails to create any nuance. It doesn't help that to convey passive aggression Raymond-James utters his lines in a barely audible manner.

During the first act it helps to have prior knowledge of the play. Anyone seeing Cat for the first time will be at a loss to understand the actions and motivations. Maggie's famously seductive and manipulatave purr is here more like a screech.

She attempts to ignite a spark of life and passion from the moribund Brick hobbling about as a cripple in every sense. Not just her marriage but a share in the family fortune hinges on an ability to lure him back to bed and produce an heir. We learn that she was raised dirt poor and has a palpable fear of ending up in the gutter.

Brick, however, could care less and is headed for skid row sooner or later.

The night before, while drunk, he stumbled and broke a leg while attempting to jump hurdles at the high school track. It was a pathetic attempt to relive some of the glory of athletic youth and memories of his deceased buddy Skipper.

After college they continued their partnership in pro ball as quarterback and wide receiver. They bunked together on the road and then, just a couple of times as Brick insists, they were more than just friends. Ultimately, this shattered their manhood. The resultant crisis and confusion caused Skipper to drink himself to death and Brick is intent on following him to the grave. The very thought of Maggie as a sex partner disgusts him.

When Williams wrote the play in Tangiers its seething sexual conflict was bold for the time. It won the Pulitzer Prize in 1955. It was directed on Broadway by Elia Kazan who served to shape up scripts by Williams into workable productions. The 1958 film adaptation earned several Oscar nominations but won none. The content was too controversial and the winner for Best Picture was the more benign Gigi.

Contributing to the disjunction of this production is an awkward, sprawling set by Jason Sherwood. For once there was no effort to conceal the four posts that support the ceiling of the ancient theatre (now in its 88th season). Instead they define the corners of a bedroom. Behind this is a wrap around veranda with photo murals suspended to create an illusion of sky with a fringe of trees at the bottom.

All three acts are staged  in this bedroom without walls. It creates unconvincing blocking and confusing entrances and exits. It is difficult to discern if the actors are in or out of the bedroom and why. At one point family members are conveyed as outside watching fireworks but this action is vague at best.

While the first act, the setup between  Brick and Maggie is mostly a nuddled wash, the drama comes alive with the entrance of the ornery old cracker Big Daddy (Jim Beaver). He is brutal and abusive to everyone in sight particularly his long suffering wife. Now that he thinks he's ok he tells Brick that he aspires to seduce women and drape them with furs and jewels.

This cracker Mississippi goddam bastard is a piece of work. Brick, while ever respectful, is unique in not sucking up to him.

With seething invective Big Daddy clings hard to life. He fought his way from nothing to wealth and power. Beaver is everything one would hope for in the character.

During the brutal dialogue between father and son the understated performance of the melancholy and apathetic Raymond-Jones blossoms. Their exchange is riveting and multi-dimensional. What starts as a discussion ratchets up to an Oedipal death struggle. The crippled Brick is tossed about. In ever sense Big Daddy takes away his crutch.

While enraged by his son’s wretched alcoholism there is also a deep and lingering love. At a key moment he blurts out that Brick is his only son.

This is a devastating blow to the other son Gooper (Timothy Gulan) who with his wife Sister Woman (Jenn Harris) has done everything possible, unsuccessfully, to endear himself to his father. The ‘good’ son is a corporate lawyer.  And, well, how could anyone love a lawyer?

Big Daddy dismisses his daughter in law as a “good breeder.”  In her limited role as mother and schemer Harris is superb. In exchanges with her rival Maggie more often than not she delivered the deadly zingers. Compared to Harris and her aggressive, Lady Macbeth-like character the performance of Gulan was flat and craven. Which is perhaps what it should be. His wife wears the pants in the family.

There are also the minor roles of Doctor Baugh (Brian Russell) the bearer of bad news and Reverend Tooker (David Adkins) who hopes to be remembered by the estate. The perky and charged juvenile Julianna Salinovici (Dixie) is the lone signifier of a brood of "no neck monsters."

Like that mad bat flying about now and then this production takes off. But there just isn’t enough purr from Maggie the Cat. When she should be sly and catty lashing out her paws seem to be declawed.

Overall this Cat on a Hot Tin Roof felt neutered. The "update" staged by the director, David Auburn, made me crave the old time religion of Elia Kazan.