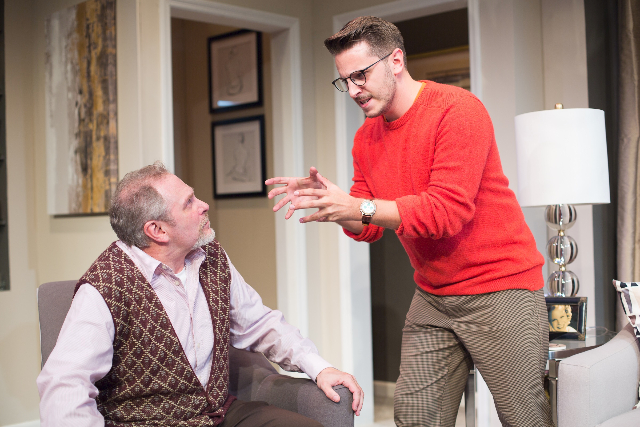 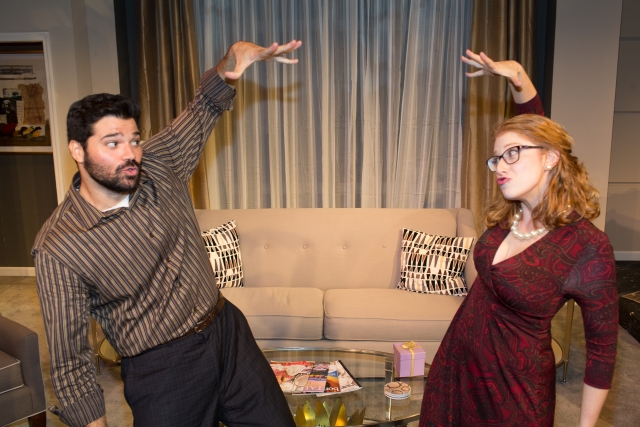 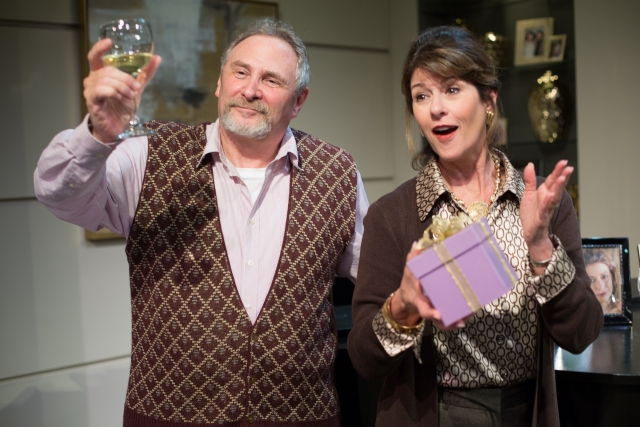 Shakespeare wrote “All the world’s a stage, and all the men and women merely players.”

But have you ever found yourself wishing that you were the director of your life – one with the power to say something like, “OK, let’s stop right there and take it from, say, hours ago.”

Perhaps you have made an error in judgement or speech, and you want a do-over. Or, perhaps you want to delay the inevitable passage of time because you’ve heard disturbing news about the future.

Playwright Stuart Meltzer, in his clever, elegantly written, unpredictable new play The Goldberg Variations, has combined the notion of reverting to the past for reasons such as the aforementioned with a masterwork of classical music by Johann Sebastian Bach.

That composition is also called “The Goldberg Variations” with differences in mood, tone and tempo for each of the 30 variations, or themed movements of composed music.

The South Florida-based Meltzer’s play is receiving its world premiere in a mostly stellar production by Island City Stage near Ft. Lauderdale through July 16. It’s set in present-day Upper West Side Manhattan in the Goldbergs’ luxurious apartment (designed spaciously and with elegant detail by scenic designer Michael McClain and lit with mood-appropriate lighting by Ardean Landhuis).

With The Goldberg Variations, Meltzer has turned what would otherwise be a thoroughly relateable but formulaic work with one-dimensional characters into an originally-structured play. “The Goldberg Variations” refers to the actual work by Bach, the variations of how scenes play out and characters react during the course of the play and, of course, the play’s title.

Meltzer has managed to use Bach’s work without requiring the audience to know a thing about music. You’re sure to relate to the dysfunctional Goldberg clan, a stereotypical Jewish family gathered to celebrate the birthday of a deceased family member. Each character has his or her own idiosyncrasies, lending variety to this clan as though they were as varied as, well, the Goldberg Variations (Bach’s composition).

There’s plenty of pathos in the play (you’ll need tissues, guaranteed), but those sad, touching moments are leavened with ample hilarity.

Meltzer's idea apparently is to have the mood and pace of scenes mirror that of one of the musical variations. A knock on the play is that it could include more of the Goldberg variations to illustrate more parallels between the tones of each musical movement and the mood of the scenes. Perhaps the shortage of music is a directorial choice by director Andy Rogow, who otherwise finds the right balance between pathos and comedy.

The play opens with a fast and furious musical theme, punctuated by at least one moment of emphasis. Similarly, family members are furiously preparing for a postmortem birthday celebration of a family matriarch, who died years ago in her 80s. With this eccentric clan, there’s a sense of urgency, as though they’re late for a flight and the airport is 30 minutes away.

The intensity of the music in the beginning is vividly mirrored by adult son Caleb, whose homosexuality isn’t sitting well with his father, Sam (a grumpy but later touching and sincere Peter Librach). Meanwhile, Caleb’s single status is bothering his “Jewish mother,” Judy (a loud motherly, meddling Patti Gardner, whose big, convincing emotions change seamlessly with the snap of a finger).

Caleb (played with nervous energy, annoyance and exasperation by Ryan Didato) is in knots, over just about everything about to happen. He looks as though he’s about to have an ulcer over the arrival of a visitor – his Hispanic boyfriend, Pablo (a pleasant, energetic Alex Alvarez).

Not only does Caleb address the audience, but he serves as the “director” of the characters’ existence, telling the Goldberg family, for instance, to break and start a scene from earlier on.

In one scene, Pablo is already in the house, having been introduced to the family. Caleb asks everyone to freeze, and they re-start the scene from the moment when Pablo arrives  knocking on the door. Tension grips the air as nobody wants to answer it. The scene is contrasted with one during which Caleb has been at the Goldberg house for a while, everyone’s been introduced and the atmosphere is relaxed.

They are contrasting scenes, like two different variations in the Goldberg composition.

As is true with other dysfunctional family plays, surprising revelations and secrets come to the fore. Without giving too much away, there’s another, much graver reason why the Goldbergs have gathered on this night. The moment is preceded with appropriately jarring music played on the piano by Judy’s daughter, Charlotte (an unpredictable Ilana Isaacson whose thunderous screaming in one scene mirrors her unpleasant piano playing).

Piano isn’t the only source of music. There’s also a rap and what resembles some type of march.

A sort of exit march will likely reverberate in your head as you leave the theater; specifically, one’s exit from this world, as you’ll be more aware of man’s mortality.

To paraphrase Shakespeare: We have our entrances…and exits.

The Goldberg Variations continues at Island City Stage through July 16 at 2038 N. Dixie Highway, Wilton Manors. Performances are at 8 p.m. Thursdays, Fridays and Saturdays as well as 5 p.m. Sundays. For tickets, call (954) 519-2533 or visit islandcitystage.org.