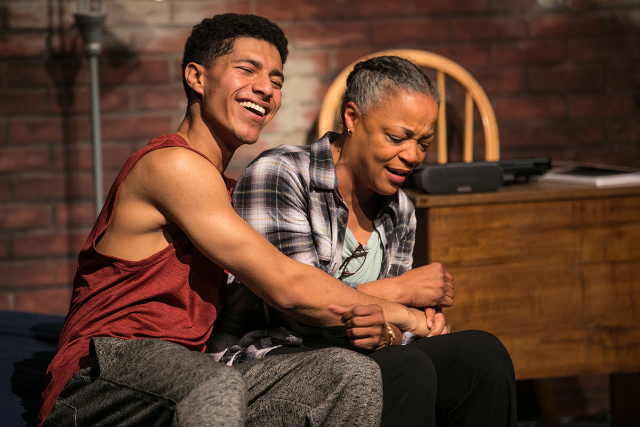 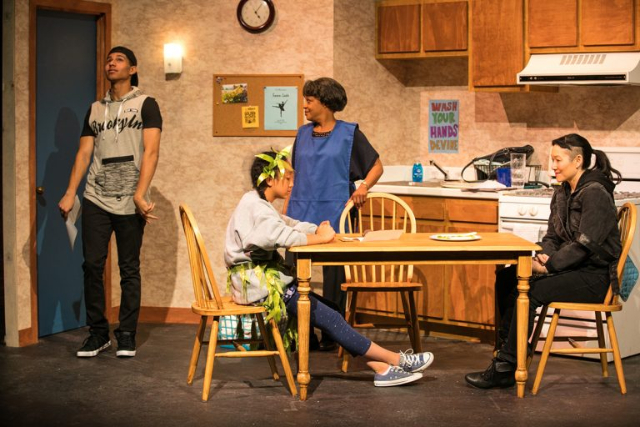 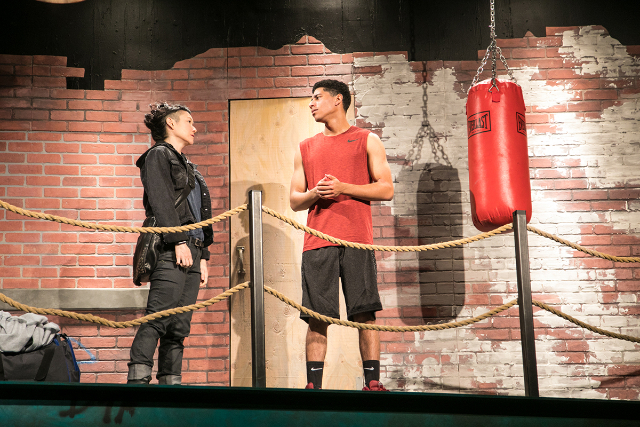 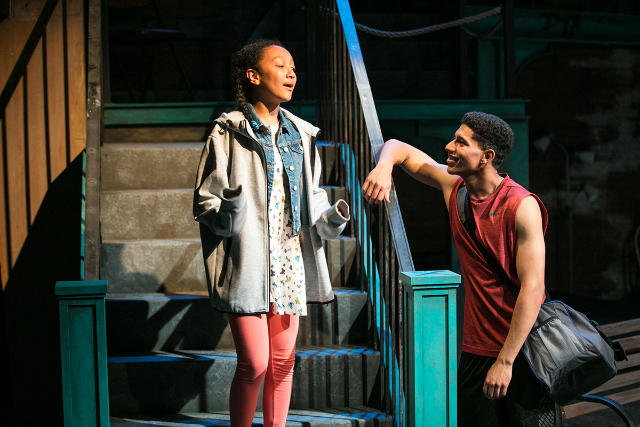 "Any man's death diminishes me." John Dunne from the poem No Man is an Island

Gun violence plagues American society, and it particularly blights our poorer, and largely minority communities.  Statistics say that murder is the leading cause of death among black men 15-34, a staggering thought in a society of great resources to combat the causes of violence.  But each death is more than a statistic.  Behind each loss is a story.  Perhaps one of a youth who had adopted the culture of violence.  Perhaps one of a bright hope dimmed.  This is a story and a production that demand and deserve our attention.

Playwright Kimber Lee's brownsville song (b-side for tray) grips from Grandma Lena's opening soliloquy on "what he wasn't."  Cathleen Riddley gives a passionate, spot-on  performance as the long-time denizen of the high-crime Brownsville projects in Brooklyn.  Riddley delivers her paean with bitterness and the resignation of one who has suffered many losses but soldiers on with commitment and hope that one day things will change.

Tray is an African-American high school senior who aspires.  Although he has slipped up from time to time, his brag sheet is good enough to put him in competition for college scholarships.  Besides his school work, his other area of accomplishment is Golden Gloves boxing. Optimistic, he refuses to let circumstances become excuses or weigh on him, and once dedicated to a proposition, he fights the full 15 rounds.  Tray is built for success, as is his portrayer, Davied Morales.  The young actor gives a stirring performance, exuding charisma and capturing the character's love for what is important to him.

Like too many ghetto kids we hear of in real life who lack parents to care for them, Tray is raised by his sacrificing and demanding grandmother, Lena.  And like most children, he has rebellious moments, but he shares a deep, loving relationship with her and with his younger sister, Devine.

Lee's play is compelling and wrenching - full of vignettes that ring true and depict well-developed characters, each with a realistic balance of virtues and flaws.  One improbable occurrence, however, is how Merrell, the children's recovering addict mother, reestablishes contact.  That said, the playwright creates a clever way for Tray to interview her about what she had been doing in the intervening years since she abandoned the children.

The narrative is non-linear.  It may not always be clear what is flashback and what is dream forward, but fortunately time doesn't really matter to the understanding.  Feelings and relationships do.  One scene that is particularly rich in meaning occurs on two levels with Tray shadow boxing on a catwalk and Devine practicing ballet in the apartment.  It reflects Tray's constant presence with Devine but also their involvement in different pursuits, his that can be tied to the past and to decline, and hers which may provide hope for betterment.

In addition to the stellar leads, three supporting cast members round out a superb ensemble. As the wayward Merrell, Erin Mei-Ling Stuart's furtiveness and pained expressions reveal a person wanting redemption but lacking the confidence to assert herself.  Eleven year old Mimia Ousilas charms as Devine.  Her dreaminess, bashfulness, and love for family are palpable.  William Hartfield is Junior, Tray's dead-end friend who reveals elder respect to Lena but a cold indifference to senseless killing within his peer group.

Director Margo Hall not only orchestrates a fine acting corps but outstanding artistic team.  Design stars are Joel Gimbell's sound, which captures the rhythms of street noise and storm, and Allen Willner's dramatic lighting, including the sweeping beam of a police light and lights from cars on the street.  Each unsettling element throughout presents a potential threat.

It bears mention that the playwright is a Korean-American female - not the most likely to author this story, yet its insights are powerful and draw from the author's experience.  It is not clear whether the ethnicity of Merrell is specified in the stage notes, though it is known from the script that she is not black.  The perplexing title is in the form of the two surfaces of an old 45 or 78-rpm record, in which the designated "a" side is expected to be the more popular with buyers, but the "b" side may have special significance to the author.

brownsville song (b-side for tray) by Kimber Lee is produced by Shotgun Players and plays at Ashby Stage, 1901 Ashby Ave, Berkeley, through July 9, 2017.