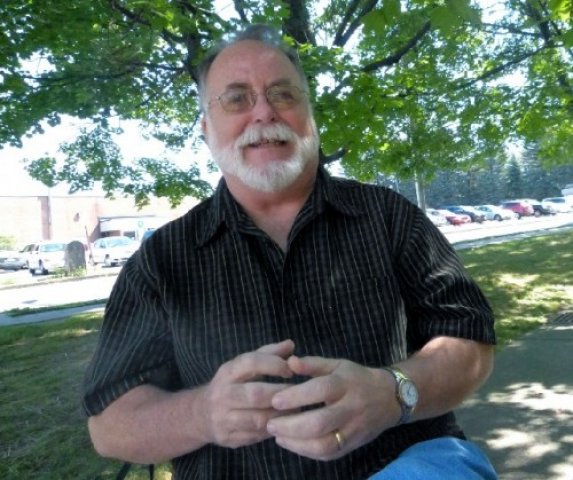 There is a long standing relationship between the playwright Mark St. Germain and Barrington Stage Company. The smaller of its two stages is named for him.

My first exposure to his work was “Freud’s Last Session” in 2009. It was reviewed for this site by our contributor, the late Larry Murray. A pullout quote from that review was “A work of genius.” The play went on to have global productions.

I covered the next one “Best of Enemies” in 2011. Near the end of its run we discussed it over breakfast. We have met often since then to explore new works of which there have been a number. Last year he moved to Sheffield in the Berkshires. Interactions have become frequent during Barrington’s opening nights.

Those exchanges are strictly social as American Theatre Critics Association (ATCA) ethics forbid critics to discuss productions prior to reviews. This particularly pertains to intermissions when critics tend to chat. You never know who might be listening. It is impossible, however, to prohibit facial expressions and body language.

Yesterday was the first day of rehearsals for “Gertrude and Claudius” which will follow Sondheim’s “Into the Woods” on the Boyd-Quinson Main Stage. In a moment of self-reflection, Mark commented that it will be his thirteenth play to be produced by BSC.

St. Germain is among the most produced of America’s living playwrights. I asked what has been staged in the past year. He paused to think about that and off the top of his head mentioned “Best of Enemies” “Dr. Ruth” and commented that “Dancing Lessons” is widely produced in Europe. There are now fewer productions of “Freud’s Last Session.”

“It’s been done” I commented as he agreed with a laugh.

Our dialogues represent a rare relationship between a critic and playwright. That’s like the lion enjoying company with a lamb. The norm is for separation between critics and those we write about. That is offset by the unique opportunity for understanding the creative process.

Discussing what goes into creating a play enhances when experiencing and reviewing. That entails Mark’s work and the broader challenge of encountering new plays. This season Berkshire companies are mounting a number of world premieres. First impressions are particularly relevant when productions move to Broadway and Off Broadway. There is unique pressure and responsibility in being a first responder. Initial reviews can make or break a show.

What emerges in regional theater is more important now that out of town tryouts in Boston and New Haven, for example, no longer occur. Some major productions, like the ill-fated “Spiderman,” go straight to Broadway with extended previews. In the era of blogs that results in unauthorized reviews. The webbed one was DOA by opening night.

During the development of “Scott and Hem in the Garden of Allah,” in 2013, we discussed F. Scott Fitzgerald and Ernest Hemingway. I had read most of their novels as well as biographies of Fitzgerald and his wife Zelda. His research of Hemingway’s private life contributed to their imagined meeting and volatile conflict.

In a rolling world premiere, Astrid and I saw a production at Contemporary American Theatre Festival in Shepherdstown, West Virginia. We were there for an ATCA theatre conference. Not long after we attended the opening at Barrington Stage Company. It was intriguing to consider the nuances between productions as well as cast changes.

Finding time in the current rehearsal schedule afforded less opportunity to stretch out. The window for a meeting kept shifting from noon to eventually 2 PM. There was some general catching up on observations of the emerging season.

Before returning to rehearsal he provided a thumbnail of “Gertrude and Claudius.” It opens on July 21.

Charles Giuliano The new play is based on Gertrude and Claudius by John Updike (2000). How did that come about?

Mark St. Germain Orlando Shakespeare Theatre had been trying to get the rights to it for some time. Somebody has the movie rights sewn up. It’s never going to sell. I said “Why don’t you got after the theatrical rights? They said they had.

The same board of  literary executors had refused them ten times. So I tracked down Updike’s son. I called and he said “That board is a pain in the ass. My sister and I take turns serving on it because we don’t like to be on it. I’ll talk to them.” Then he got us the rights.

CG What was the reason for turning it down?

CG What attracted you to it?

MSG I thought it was interesting. Creating the backstory for “Hamlet” was fun. It was a challenge as I found that Updike’s language is much more difficult than Shakespeare’s. The first time we did a reading of it the audience was practically asleep. I thought, you know what, I have to gut the whole thing. I had to forget about Updike and pretend that it was my play. After that it was definitely better.

I only heard it for the first time today but the two actors are very good. It was Juliann’s (Boyd artist director) decision to put it on the main stage as she did with “Best of Enemies” and “Dancing Lessons.”

MSG They did. There are six people in the current play. There is Gertrude and Opheleia's father Polonius. Hamlet is in it fleetingly. As Updike looks at it Gertrude was not involved in the murder of her husband (the King). Claudius really had no choice. He did have a choice in the sense that they might not have had an affair. Let’s face it, if you’re sleeping with the queen you know your head is going to roll and the sex better be great. It may be the last time you ever have it. (both laughing) I like it because it’s very ironic.

CG What is the feeling and process through Updike, Shakespeare, and then St. Germain? That’s a lot of transition.

MSG I had to forget it was Shakespeare. Just do Updike then sort of forget it was Updike. As far as the main points it is faithful. Claudius isn’t in half of the book. You’ve got to keep him in there from the beginning and have enough comedy to relieve some of the tension. People love Polonius so you have to put him in more.

CG Given the literary paradigms what’s your approach to the language?

MSG Basically, it’s very simplified Updike. He was stylized with the language. He would use five adjectives for what you could do with one or two. So it was a matter of stripping it down as much as possible.

This play was written a couple of years ago but they had to wait until they could put it in repertory with “Hamlet.” They wouldn’t let anyone else do it until they did. So once Orlando produced it Barrington wanted it.

CG How was it received in Orlando?

MSG They wanted to put everyone from their “Hamlet” into the production. When I would go home for a week and return they had Ophelia in the play. They are not used to living playwrights. I said “Clean it out.” It’s all gone. They weren’t happy with that.

CG You can’t do that.

MSG Supposedly, but they are not used to playwrights who are alive. They’re just not.

CG You can do what you want with Shakespeare.

CG What’s the cutoff point for that? How old does a play have to be?

MSG The playwright has to be dead. But that’s not true. They (estate of Thornton  Wilder) went after "Our Town" ten or fifteen years ago. Not the one that was popular in New York. It was earlier and they changed a couple of things.

Even for the current Barrington production of “Into the Woods” they had to have permission of the creators to cast a man as the Witch. They gave it a pass so that was how they were able to do it.

CG It was very successful.

Sorry Charles, I would like to talk more, but I have to get back to the rehearsal.

CG We are looking forward to the opening.