Also at Eclipse: Ralph Brill Gallery Opens Nude and Naked Over the Fourth of July in North Adams 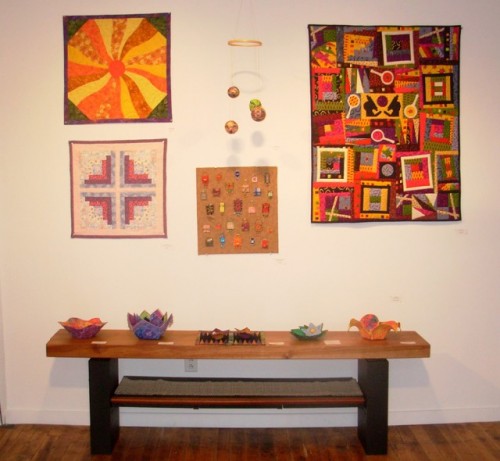 A collaboration between Brian D. Handspicker, the bench/table and Beth Davis. 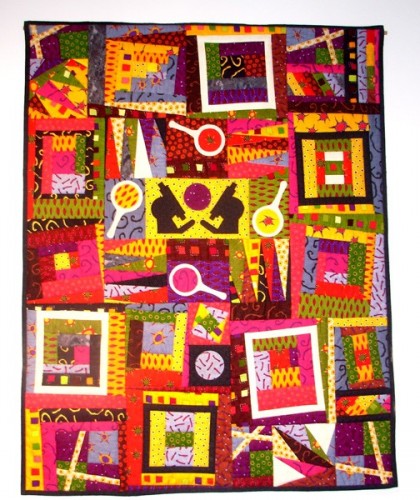 A quilt by Beth Davis. 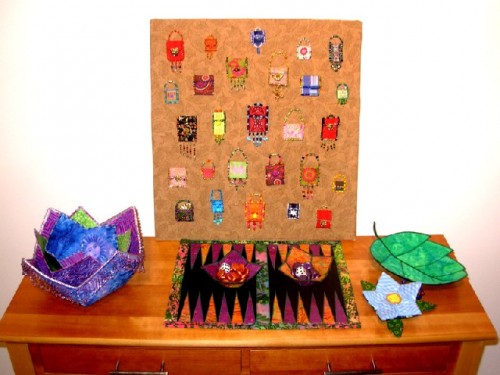 A selection of objects by Beth Davis. 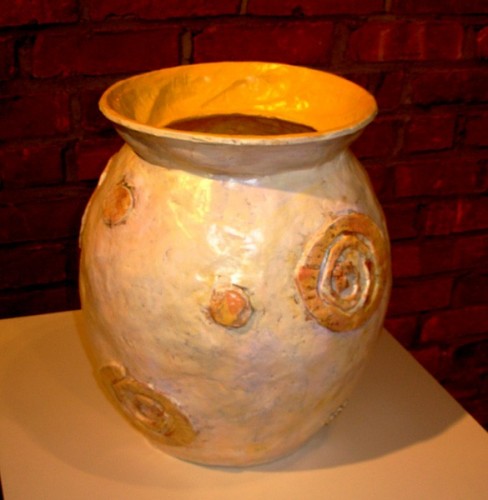 A vessel by Sharon Carson. 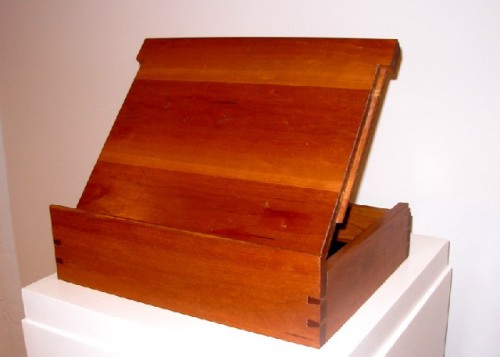 A Table Top Music Stand in cherry and red oak by George Aitken. 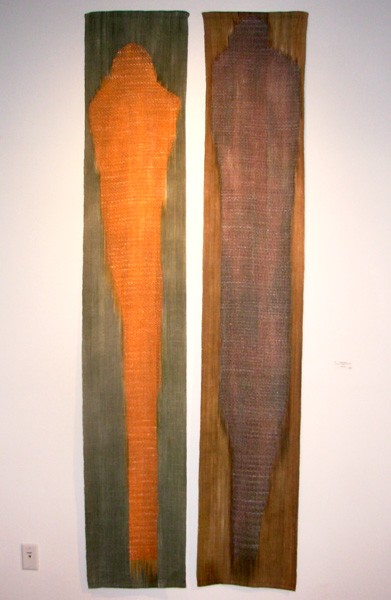 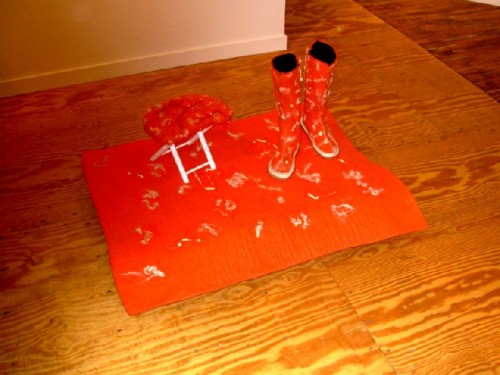 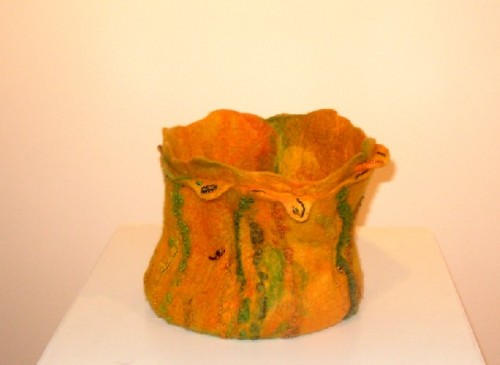 A vessel by Jane Herman. 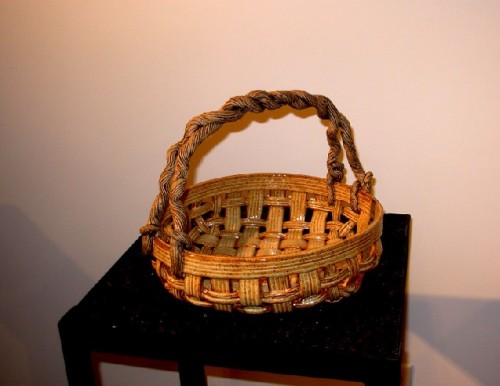 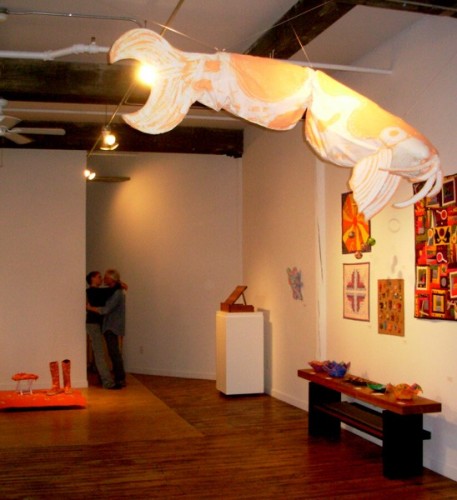 The Off the Wall installation with a puppet by David Lane. 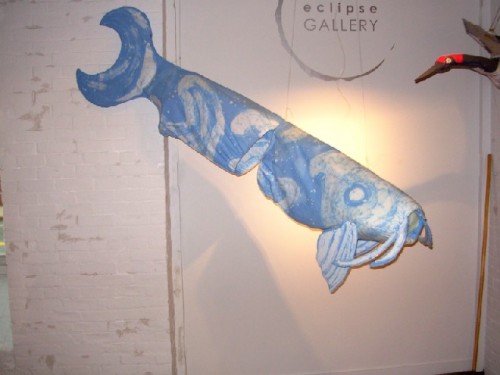 The puppets of David Lane were recently featured during an event at the Clark Art Institute. 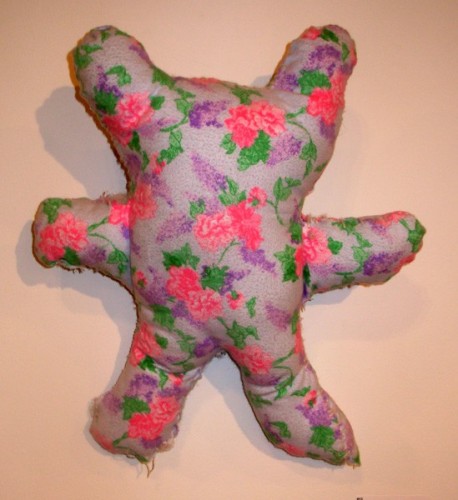 Sophia Lane is the youngest artist ever to show her work at the Eclipse Mill Gallery. 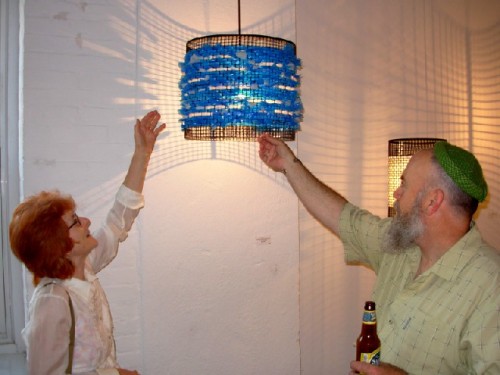 Brian Jewett explains to Astrid Hiemer the materials included in his light pieces. 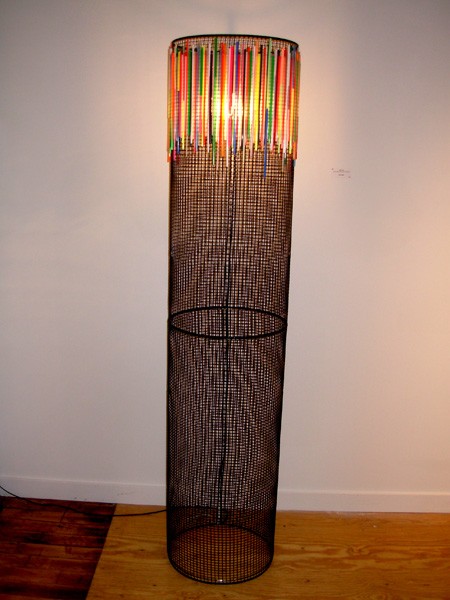 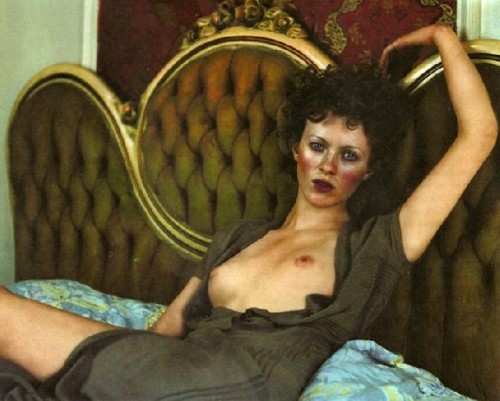 When artists were negotiating the purchase of lofts in the Eclipse Mill in North Adams from developer/ artist, Eric Rudd, it was decided that all of the units would invest in a common area. This is a mixed use space which hosts loft meetings and events. In addition to functioning as a gallery it is also used regularly for Movie Nights organized by archivist, Rich Remsberg.

Currently there is an exhibition featuring Remsberg at Gallery 51 of MCLA on Main Street in downtown North Adams. A number of Eclipse artists are also included in the North Adams Coop a temporary project, organized by ceramic artist and Mill resident, Dianne Sullivan. That gallery and several others are part of the Down Street project which opened with great hoopla this week and continues through October 31.

The Eclipse Mill Gallery, which is artist run, has just launched its second show of the season "Off  the Wall: Art of the Eclipse in the Third Dimension." which will run through  July 27. The Eclipse Mill Gallery program continues through New Year. After that, like everything else in the Berkshires, the bears/ artists crawl into their dens to hibernate and make work to be shown the following season.

The Kolok Gallery is returning for another season with an exhibition of large format prints by Brandon Graving who divides time between North Adams and her native New Orleans. Kolok is just down Route Two from the Eclipse and steps from the popular destination Mass MoCA.

There has been a lot of energy devoted to coming up with plans and strategies to lure an increment of the 100,000 plus visitors to Mass MoCA and encourage them to spend more time in North Adams visiting other artist venues, shops and restaurants. The Down Street project and its temporary art galleries evolved from that thinking process. One very good idea has been to print a map with all of the now dozen and more locations to view contemporary art in addition to the world class offerings of Mass MoCA. Significantly, visitors can pick up the map at the museum and head off for self guided tours.

On weekends, there is a sign posted on Route Two announcing that the Eclipse Mill Gallery is open. Most days, Phil and Gail Sellers also put out a sign for their River Hill Pottery. Once inside the Eclipse visitors may also visit the Ralph Brill Gallery which mounts shows by major contemporary artists and photographers. Further down the hall there is a following for the odd volumes offered by bookseller Grover Askins.

Frequently visitors inquire if there is more to see in the Eclipse. One may visit studios by appointment and many artists open their lofts during the annual weekend of Open Studios which occurs in October. For this year's event their will be a group show of Eclipse artists in the gallery which will provide visitors with a thumbnail of studios they may visit. Open Studios is a city wide event so there is a lot to take in.

The ongoing program of the Eclipse Mill Gallery provides opportunities for artists to show their work in a context with other artists. The exhibitions primarily focus on the work of Eclipse residents but there are also efforts to include a wider range of regional artists. In that sense, the first show of the season "Berkshire Salon" was successful in showing some 48 artists of which three quarters were area artists. The next Eclipse show will feature the work of Pennie Brantley and Robert Morgan, two realist painters, who live in New York State about a half hour from North Adams. They are excited about the opportunity to show their work in what they consider to be "One of the best spaces for artists in the Berkshires."

The current show, organized by the curatorial team of the Brians, Handspicker and Jewett, has proved to be adventurous. While the concept of the exhibition was established months ago there was some suspense until the last minute as to what actual works were to be included. Going into the actual installation there were technical issues that forced an artist to withdraw. On the other hand, during a visit to the opening of the new Tadeo Ando building last weekend at the Clark Art Institute, the curators spotted large puppets commissioned by the Clark. They were created by David Lane who only recently moved into the Eclipse Mill. He was hastily invited to participate in the exhibition. He is currently working on a still life series in homage to Chardin..

While installing Lane's puppets in the gallery his daughter was very excited and asked is she could also show a teddy bear which she has made. This prompted a hasty round of e mails among the artists participating in the exhibition. It was agreed that this was a good idea so her piece has been included in the exhibition. Now it will be the first entry on the resume of the emerging artist Sophia Lane. Not a bad start.

Recently there has been a lot of discussion in letters to the editor of the North Adams Transcript regarding just how to define an artist. The current exhibition provides a lively discourse on that debate. Most of the works in the current project cross back and forth between the definitions of art and artifact. While all of the works in the exhibition have been hand crafted by artists many of them are objects which are also functional.

The work on display by George Aitken is an exquisitely crafted "Table-Top Music Stand." It has been assembled from cherry and red oak. No sandpaper has been used as the wood has been planed to a smooth surface that reveals the wonderful natural grain, color and texture of the material. In the past year Aitken has been primarily involved in making furniture for the loft he shares with theatrical designer Julie Seitel.

Gail and Phil Sellers of River Hill Pottery are participating in the Eclipse Gallery exhibition. They are showing several of their woven and glazed clay works. The pieces have a variety of useful functions but may also be admired purely as beautiful objects. Their work may also be seen at Harrison Gallery in Williamstown.

The felt artist, Jane Herman, combines both works which may be worn, in this case a pair of boots, as well as fine arts creations such as the vessel which is on display in the current exhibition. Last season, Herman organized an exhibition of works by a number of her fellow felters. It was intriguing to see the range of what is being created in the medium.

While Carson is primarily known for landscapes and still life paintings executed with the loaded brush and high chroma color of the Fauve tradition here we see another aspect of the work in a series of papier mache, painted vessels. Lewis has a large paper piece suspended over a window creating interesting back lighting. And two of her long, narrow, wall hangings. She is showing a selection of paper works and collages in the Coop exhibition.

Brian D. Handspicker and Beth Davis have collaborated in an installation of their work. He created the table that displays a range of her exquisitely crafted pieces which may be regarded as jewelry items. Above this display is suspended a group of her ball creations as well as examples of Davis's quilted objects which are playful, colorful and inventive in forms and colors.

The artist/ curator, Brian Jewett enjoys working with found and recycled materials and techniques involving aspects of weaving. In the current work he is creating light pieces involving ways of manipulating wire screens. Into these circles around suspended light bulbs he weaves the blue plastic tubes in which the Transcript is delivered. It is an interesting comment on recycling the news media. When the artist was living in California he started to collect colored straws. He has arranged a circle of these around the top of his light shade. He is disappointed to report that the straws he is collecting on the East Coast are no where near as varied and colorful as those he gathered in L.A. Oh well. Jewett shows his works regularly at Hudson's in Mass MoCA.

Finally, we are passing along a note from Ralph Brill about his show which is opening soon. "Hopefully to be open by the Fourth is my new exhibit - NUDE & NAKED - to be among the most Beautiful and Important International Photographic Shows of the 2008 Season.  Several Important and Museum Collected International Photographers will be displaying their Nudes - some of which will be exhibited to the public for the very first time.  This all takes place in the BRILL GALLERY in The Eclipse Mill.  Collectors and Curators from around the country are making appointments.  There will be Rare Leonard Freed and Eve Sonneman Prints. Others include Michel Comte who recently made headlines because he took a nude photo of the French President's wife - Carla Bruni-Sarkozy.  That Photo was auctioned at Christie's a few weeks ago for $91,000. Comte gives a large portion of his profits to help the victims of land mines in Afghanistan.  Also present are Leonard Nimoy's Full Body Project Photos and Roy Volkmann's Dancers. I have also included a couple of Emerging Photographers' works including two that our own Timothy Nazzaro shot last year in Sweden."

Most importantly the Eclipse Mill Gallery is a part of the lively and diverse critical mass of activity happening this season in North Adams. Regarding the recent round of editorials and letters to the editor in the Transcript this is just further evidence that artists and galleries are contributing to the social and economic life and recovery in the Northern Berkshires. Support this effort by getting out and seeing the wonderful range of work on view.