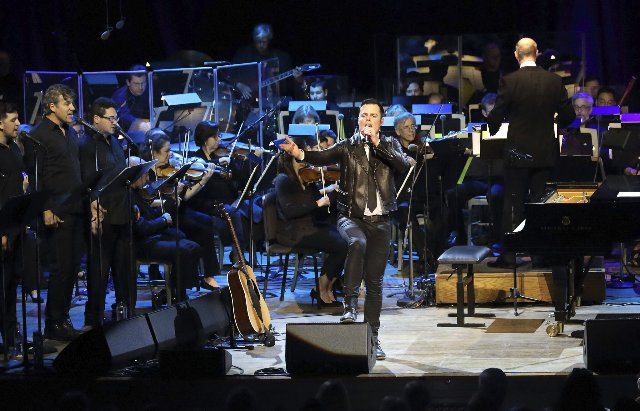 In every sense The Boston Pops rocked last night at Tanglewood.

The program focused on an orchestral treatment of the music of the late Freddie Mercury and the British band Queen. To frame that Burton launched the evening with Walton’s “Orb and Scepter.” With the touch of humor that pervaded the concert he commented that it had been composed for the coronation of Britain’s other Queen, Elizabeth II.

There was more British themed music with “Fantasia on Greensleeves” traditional folk music arranged by Vaughan Williams. There was an odd, two minute, catchy mashup, “Country Gardens” by Grainger. Burton explained that there was a ‘mistake’ written in for viola. We strained to catch the riff but the ditty came and went all too fast.

Knowing that the night honored Queen there was an awkward reference to that other British band, The Beatles. You may have heard of them.

Burton related how George Harrison visited Eric Clapton. At dawn in his garden the idea emerged that led to “Here Comes the Sun.

For twelve years Martel performed and recorded his own music. He told us that meeting with fans after gigs in small clubs they kept remarking that “You sound just like…” Eventually, he checked out an album of greatest hits and got the point. In his living room he made a You Tube video performing a Queen song. Within days it had gone viral.

When Queen drummer, Roger Taylor, organized the touring Queen Extravaganza in 2011 Martel signed on to clone Mercury. The vocal resemblance and daunting range is indeed stunning. He left in 2017 to star in the tribute Ultimate Queen Celebration. Eight years on and, following the Oscar winning performance of Rami Malek in the film Bohemian Rhapsody, Martel blew the roof off the Shed last night.

With a declaration of menacing intent Martel opened with “Don’t Stop Me Now.” Backed by David Thorne Scott, Adam Gautille, Paul Pampinella, David Stockhouse the music ranged from compellingly poignant ballads through stomping rock anthems. The pace of two sets was measured through stands at the mic blasting out lyrics to stints at piano, as Mercury often did. He even strapped on an acoustic guitar and traded licks with the unseen Jon Finn.

There was a rock band embedded among the musicians but this was strictly an orchestral performance. It featured the talent and charisma of Martel evoking the shade of Mercury. It would have been better if, like the film, there was more sense of Queen as a band with four excellent musicians. While he dominated they all wrote hits for Queen.

Even bandmates were not aware until the end that Mercury was terminally ill with AIDS. It’s spooky to hear the extent to which themes of death, suicide, and mortality pervade the lyrics of his songs. The audience was dominated by true Queen fans who often sang along with the punch lines of catchy songs. Martel fed on that energy with effective back and forth. Even conductor Burton, obviously having a ball, joined in. Burton showed his true colors as a rock and roller. There were sincere hugs with Martel who, for his part, was awed by hearing the music with a full orchestra.

With two sets including intermission the evening started at 8 PM and ended precisely at 10 PM. We were up for more but there were no encores.

They ended with “We Will Rock You” and “Champions of the World.” Those super-hits would have been logical encores but there was no way of topping them.

It is time consuming and expensive to orchestrate all that music for a one-off evening of Pops. The agenda was to prepare two sets of  Queen’s music, minus the Pops light classics. There might have been expanded options were Pops to add the music of Queen to their repertoire.

That said the program was even and well planned. There was a nice selection of hits including the agonizing “Love of My Life” galvanic “Under Pressure” and the call and answer of “Radio Ga Ga.”

The first set ended with the odd, mysterious, and ground-breaking masterpiece “Bohemian Rhapsody.” Some eighty takes were involved in overdubbing vocal parts with all four band members harmonizing into a single microphone. The Mercury masterpiece has been discussed as coming out and killing his former straight self to emerge with an evolved identity. He came from a religious Farsi family for whom being gay was unacceptable.

It took Mercury seven years to write the 1975 song. In its original form the cutting edge song was viewed as too long at 5:55 minutes and too conceptual for commercial release. The record company demanded that it be trimmed to the standard three minutes. The band refused to make changes.

When a friendly comedian DJ snuck in on air the phones lit up. He played it 14 times over two days and the song soared to the top of the British charts. It is now regarded as one of the greatest and most innovative all time rock songs.

It was galvanic and stunning to hear it booming through the Shed as fans swooned.

For the life of such a genius to be cut short there are so many “what ifs.”

In a sense Martel offered creative speculation. Seated at the piano he described how his own background in classical music mirrored that of Mercury. In “Bohemian Rhapsody,” for example, there are many literary and musical references. Martel told us that Mercury was particularly interested in opera.

Evoking the style and range of Mercury he rendered a stunning solo of “Ave Maria.” He accompanied himself on piano as a pause hovered over the orchestra. We were fascinated with Martel stepping through and beyond an impersonation of Mercury.

In addition to impersonating Mercury perhaps the exposure of “Bohemian Rhapsody” will elevate a career of his own music. The chops he displayed last night demonstrated his superstar potential. In addition to a truly amazing vocal range he was a fluid and compelling performer.

For Martel, indeed, the best is yet to come.