Four Productions to Be Extended 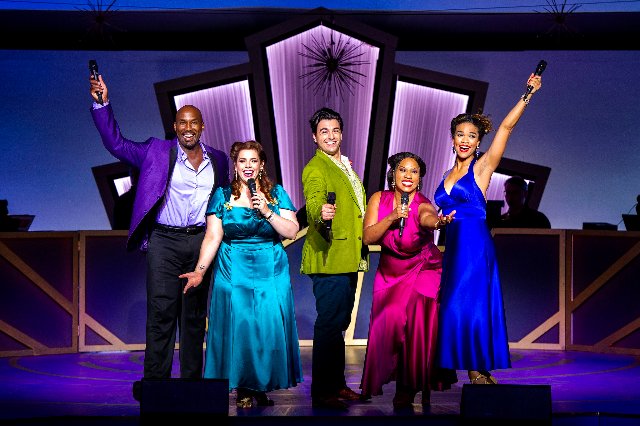 Barrington Stage Company (BSC) announces extensions for the first four productions of the theatre’s 2021 season: Who Could Ask for Anything More? The Songs of George Gershwin, Chester Bailey, Eleanor and Boca.

"What a pleasure to open two theatre spaces, with the joyous Who Could Ask for Anything More? in our outdoor tent and the hauntingly beautiful Chester Bailey at our Boyd-Quinson Stage, and watch audiences leap to their feet nightly with each one. And even before opening, Eleanor and Boca have extended their runs to meet audience demand. We are thrilled to witness the true return of live theatre to the Berkshires, safely and responsibly, after so many months of uncertainty," said Artistic Director Julianne Boyd.

Who Could Ask for Anything More? The Songs of George Gershwin, a concert celebrating the work of one of the greatest songwriters of the 20th century which also earned raves from critics and audiences across the board, has been extended for an additional week through Saturday, July 10 at an outdoor tent at the BSC Production Center (34 Laurel Street). The production stars Allison Blackwell (BSC: Ragtime; Broadway: Porgy & Bess); Britney Coleman (Broadway: Company, Sunset Boulevard), Alan H. Green (BSC: Holiday Getaway, The Hills Are Alive..., Broadway Bounty Hunter, American Underground; Broadway: School of Rock, Sister Act); Jacob Tischler (Regional: Catch Me If You Can, Singin’ in the Rain); and Alysha Umphress (BSC: Holiday Getaway, The Hills Are Alive..., On the Town; Broadway: On the Town, American Idiot). Conceived by Ms. Boyd and Darren R. Cohen (BSC: On the Town, Sweeney Todd, Follies), with musical direction by Cohen and choreography by Jeffrey L. Page (BSC: Company, Broadway Bounty Hunter), Who Could Ask for Anything More? features some of the most-beloved songs in the Gershwin songbook, including “I Got Rhythm,” “Embraceable You” and “Summertime,” among many others.

Eleanor, a new play by BSC Associate Artist and playwright Mark St. Germain (BSC and Off-Broadway: Freud’s Last Session), starring Tony Award winner Harriet Harris (BSC: Sweeney Todd, The Royal Family of Broadway; Broadway: Thoroughly Modern Millie) and directed by Henry Stram (Broadway: Network, Junk), will now play an extra week through Saturday, August 7 indoors at the Boyd-Quinson Stage (30 Union Street). The production comes to the stage after a virtual reading of the play was a hit with BSC audiences last year. Eleanor brings to life Eleanor Roosevelt, the most influential First Lady the world has ever seen. From her “Ugly Duckling” upbringing to her unorthodox marriage to Franklin, Eleanor puts her controversial life, loves and passions on the stage. The production marks Ms. Harris’ fourth time playing the character of Eleanor Roosevelt, after previously portraying her on stage (Paul Rudnick’s Rude Entertainment) and screen (TV’s “Hollywood” and “Atlantic Crossing”).

Finally, Boca, the world premiere play by Jessica Provenz, and directed by Ms. Boyd, will play an additional week through Sunday, August 29 at the BSC Production Center (34 Laurel Street). In Boca, we’ll travel to the Sunshine State for a night of short comedies that follow a group of retirees who, between rounds of golf, bridge and Botox, can be found bickering, gossiping, and living it up like they’re teenagers all over again. The production will star Debra Jo Rupp (BSC: The Cake; Dr. Ruth, All The Way), and beloved veterans of BSC’s 10x10 New Play Festival, Kenneth Tigar, Peggy Pharr Wilson and Robert Zukerman, with additional casting to be announced.

BSC’s 2021 season on the Boyd-Quinson stage also features the world premiere of Sister Sorry (August 12-29), a new play by The New Yorker writer Alec Wilkinson, loosely based on a stunning true crime confession, and directed by Richard Hamburger (Japanoir, Curse of the Starving Class); and the world premiere of A Crossing (September 23-October 17), a timely new dance musical co-conceived by BSC Associate Artist Joshua Bergasse (BSC: The Royal Family of Broadway, On the Town; Broadway: On the Town) and Mark St. Germain, with book by St. Germain, music and lyrics by award-winning songwriter Zoe Sarnak (Secret Soldiers, Empire Records), created in association with Calpulli Mexican Dance Company and directed and choreographed by Bergasse.

The outdoor tent also features the following concerts by a stunning array of Broadway stars:

I Promise You a Happy Ending (July 24): Broadway vet and BSC leading man Jeff McCarthy(BSC: Mack & Mabel, Man of La Mancha, Sweeney Todd; Broadway: Beauty and the Beast), will sing some of the most popular and beloved songs he’s performed throughout his years in the theatre.

Legally Bound (August 23): Broadway’s Orfeh and Andy Karl (Broadway: Legally Blonde, Pretty Woman, Saturday Night Fever) have had an impressively long run a one of Broadway’s best couples. The sexy, funny and enormously talented duo will tear through an eclectic mix of pop, rock, rhythm and blues, and showtunes that is sure to delight.