New Comedy at Geffen Playhouse in LA Until July 19 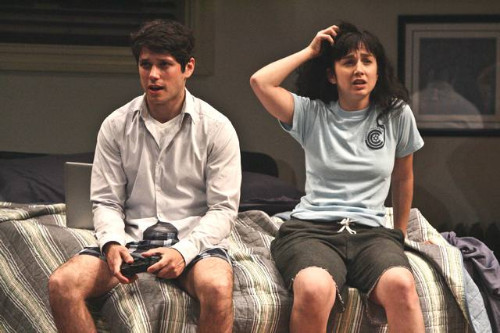 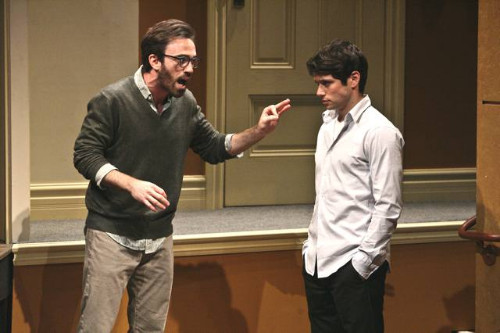 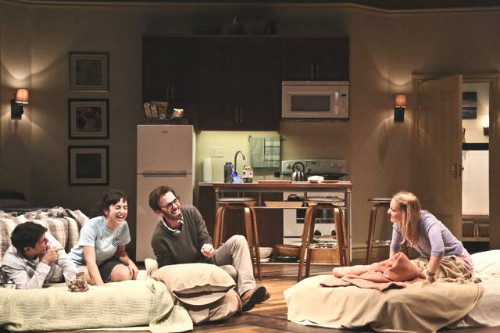 Nothing gets conversation started as quick and as passionate as aficionados of sports, or the divisiveness of political discourse, or, the radio-active subject of religion with its deep-seated tenets – even among families, let alone the general public.

Which brings us to the highly entertaining but prickly subject matter embedded in the premise and dialogue of “Bad Jews”, a new modern comedy written by acclaimed young playwright Joshua Harmon. The ambiguously titled and talky play currently on stage at the Geffen Playhouse is directed by Matt Shakman, who helms his production with one directorial foot planted in “tradition” and the other directorial foot solidly rooted in the secular 21st century. What’s a young, talented, cast to do when faced with the dichotomy of a comedy/mellow-drama with such parameters?   Why, just act the hell out of it and let the chips fall where they may.

The story revolves around ”good Jew?” Daphna Feygenbaum (Molly Ephraim) who swears to one and all that she is the most devout Jew in her family. However, when her less than observant “bad Jew?”cousin Liam Haber (Ari Brand), arrives to claim a treasured family heirloom – a chai – a religious symbol from their late grandfather and Holocaust survivor, Daphna employs her considerable skills of persuasion and intimidation on her two male cousins that she should have the chai which then develops into a screeching, funny battle of Old Testament proportions.

We’re not talking Neil Simon comedy zingers here. We’re dealing with a brainy, savvy, envious, irritating, and mean-spirited young know-it-all Vassar senior who is taking on her older, highly educated, high-strung cousin Liam who gives her more Biblical quotes, sociology lessons, and philosophical food for thought than she bargained for. It is delicious confrontational dialogue and theatrical craftsmanship at its finest. It is talky; but everything that needs to be said is accomplished in 87 minutes. There is no intermission.

One doesn’t have to be Jewish either, in order to relate to the verbal fisticuffs and comedic poison-tipped darts being hurled by a proactive Daphna toward a non-receptive Liam and his girlfriend Melody (Lili Fuller). We’ve all seen either relatives, husbands and wives (Albee’s George and Martha come to mind) and friends perform their comic and sad verbal dances of animus.   Self-destructive comedy can be entertaining, at times, but only when viewing it from outside the war zone.

One character, Jonah Haber (Raviv Ullman), the younger cousin is calmly and emotionally detached from the heated, invective-filled debate – lots of f-bombs being tossed – between his brother and Daphna. “I do not want to become involved at this time” Jonah frequently says while resisting the urge to be drawn into the family squabbles when asked for his opinion.

“Bad Jews” is an off-putting title and it’s misleading as well. It may dissuade some from attending a crackling energetic production. That would be a pity, because one would the miss seeing four fantastic actors performing at the top of their games: Molly Ephraim is maddeningly effective as Daphna, despite that high-pitched screeching delivery. Ari Brand is a controlled IED device just waiting to be stepped on. Both Ephraim and Brand deliver exquisite performance gems. Also, Lili Fuller shines in her understated girlfriend portrayal caught between the feuding Ari and his cousin Daphna. Raviv Ullman is a bit of the mystery man in the proceedings but he has a very special moment just before the curtain comes down.

In the technical department the creative team led by director Shakman has his set designer John Arone, render a one-set, messy apartment; strewn with bed-sheets, blankets, and clothing that provide the look that twenty somethings just seem to relish. Lights by designer Elizabeth Harper deliver just the right amount of light in order to see the on stage action and the costumes of designer E.B. Brooks.

If I had to be picky about one aspect of this stellar production it would be to ask the director to modulate and lower the volume and vocal delivery of Daphna and Liam. When one begins the play with everyone at the top of the ceiling it’s tough for the actors to grow. They’re already at the top and the narrative flow begins to sound like it’s a Johnny one-note performance with everyone yelling.

On exiting the theatre, one could hear snatches of patron conversation. “Did you think the young Jewish girl was right?” to “I thought the quiet brother was really involved without saying much.” I spoke to a patron who said “Boy, the young actress was really a despicable person, but that’s what the playwright wanted her to be I guess”. When plays produce comments like these, one knows the actors are doing their job in Spades and loving every minute of it.

“Bad Jews” performs at the Geffen Playhouse and runs through July 19, 2015.