By Joel Paley, with music by Marvin Laird 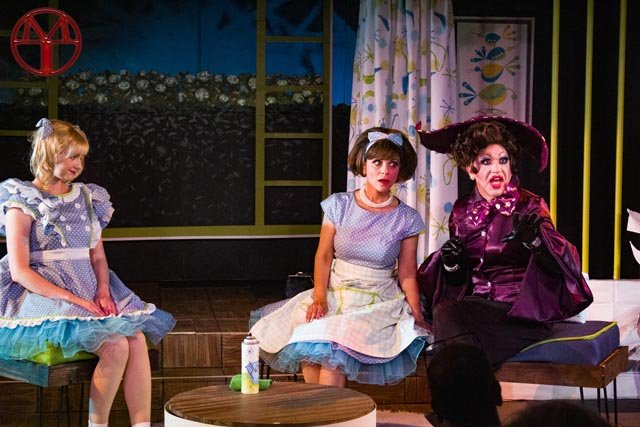 Desert Rose Playhouse of Cathedral City premieres a glitzy, glamorous, hilarious musical comedy production of the campy homage to Hollywood’s tortured, driven, divas of celluloid and of Broadway who would do “anything” to get that perfect starring movie or Broadway role.

“Ruthless”, written some 25 years ago by librettist and lyricist Joel Paley, with music by Marvin Laird, has been produced around the globe.  Now the comedy romp has arrived in the Coachella Valley at Desert Rose Playhouse, directed by longtime actor/director Loren Freeman.  Freeman starred in the 1993 Los Angeles production as Sylvia St. Croix that ran for nine months.  His role is now being played by current Desert Rose Artistic Director Robbie Wayne.

In musical comedy, the plots are thinly drawn, but energetically performed.  The more over-the-top the performances are for farces and spoofs the more audiences enjoy the show.  “Ruthless” is blessed with a cast of experienced farceurs and comedy actors who can sing, and singers who act and dance.  What more does one need from a musical comedy in order to enjoy a hilarious evening in the theatre?

“Ruthless”, is a story that chronicles eight-year-old, gifted child actress Tina Denmark’s (Elizabeth Schmelling) rise in the world of show business.  How Tina achieves her goal of stardom has echoes of the plays and movies of “The Bad Seed”, “Kind Hearts and Coronets”, and “A Gentleman’s Guide to Love and Murder”, that serve as clues along Tina’s road to her goal of stardom at any cost.  Ms. Schmelling is a mesmerizing, formidable and skillful performer with great comedy timing, as are all of her co-stars.

Robbie Wayne stars as uber-agent Sylvia St. Croix who guides the career of young Tina, is hiding something.  Shakespeare also made a career of hiding information and look how he turned out.

Christine Tringall Nunes, cleverly and neatly plays Tina’s Stepford Wives-liked mother, who also harbors secrets and desires (in comedy, secrets are a must to keep until the eleven o’clock number).

Miss Thorn, (a wonderful Dana Adkins) who runs the acting academy attended by Tina, displays Adkins’ terrific comedy acting chops that we have missed in the desert theatre scene over the last several years.

Jaci Davis as Lita Encore, brings her outstanding Ethel Merman voice impression as Mama Rose from “Gypsy” (at the Palm Canyon Theatre, with her co-star Elizabeth Schmelling, as Gypsy Rose Lee) is a joy to watch.

Leanna Rodgers as Louise/Eve, brings her energy and passion to both roles with outstanding timing. I mention the timing gifts of this solid ensemble because timing can’t be taught.  Either one has it or one doesn’t.  And his cast definitely has it!  But no spoiler alerts from me.  Audiences will just have to come and see this fun show for themselves.

In the technical and creative department led by director Freeman, “Ruthless” features a colorful, functional set design by Bruce Weber, who also designed the gorgeous costumes with assistants Rusty Waters and Ruth Braun.  Lighting Designer Phil Murphy once again cleverly gives the performers lighting that shows them at their best.  Sound Designer Adrian Niculescu, provides the sound that Board operator Miguel Gomez executes. Please Note: there are multiple gunshots fired a various points during the production.  Steven Smith is the Musical Director.

“Ruthless”, is fun-filled musical production that performs at the Desert Rose Playhouse in Rancho Mirage through July 14th.  It’s a must-see production!