One Man Show by Jacob Storms 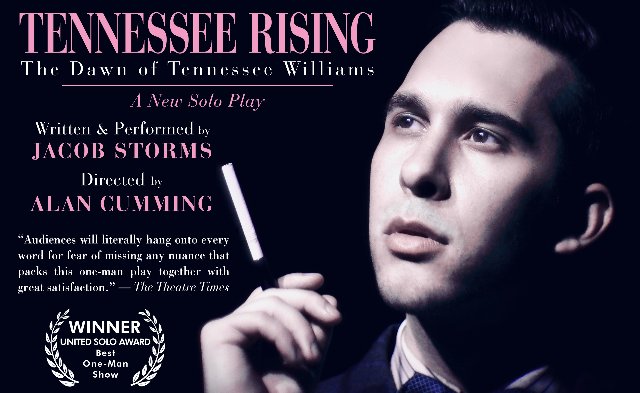 The night I attended a live production of Jacob Storm’s one man show, Tennessee Rising: The Dawn of Tennessee Williams, held at the Cell Theater in New City, it was raining lightly. Though the playwright actor was protected by a small overhang which covered the staging area, the umbrella holding, stage-facing audience, seated outside in the theater’s lovely garden was not. Ironically, this being a second rain date, it was touch and go as to whether this play would go on at all. I reminded the nervously pacing Storms -- who was performing this night for an audience of 18 (composed chiefly of theater critics -- how scary can things get?) – about Diana Ross’ 1983 Central Park concert in which, drenched to the bone she continued to sing throughout half a murderous storm.

The intermittently falling rain subsided a wee bit, and Storms, obviously a bit shaken, took to the stage. It took some ten or fifteen minutes for Storms, as well as the rest of us mask-wearing, umbrella-holding audience members to get our mojo back. But once he regained his footing and began to pepper us with little known tales of young Williams’ formative years (1939-1943), it was smooth sailing.

The play opens in a minimally furnished attic of a boarding house in the French Quarter of New Orleans. The year is 1939. It is the room in which the 28-year-old aspiring writer Tom Williams, soon to be known as Tennessee, is currently living. Downstage and center we see a small desk holding an old typewriter, with two chairs on either side. Also on view, on the top of a cupboard directly behind the desk, is a rocks glass, a half empty bottle of liquor, cigarettes, and a pair of sunglasses, all liberally used throughout the play.

Walking to the edge of the stage, with his rocks glass in hand, Storms welcomes the audience (or is it an imaginary visitor?) to his room. With his left arm cavalierly lifted towards the heavens, we are toasted with the last half of Blanche Dubois’ famous line from A Streetcar Named Desire. “To the kindness of strangers.”

Not coincidentally, it is precisely the kindness of strangers that whisks the young and fevered Williams (and us too of course) on a wild pilgrimage from New Orleans to Los Angeles, Laguna Beach, St. Louis, New Mexico, New York, Provincetown, Mexico City, Boston, Key West, Georgia, and Chicago, each of which give birth to a juicily delivered anecdote.

The amount of deep-diving research which helped to fashion Rising Tennessee, and that includes, William’s plays, movies, short stories, letters, interviews, several biographies, memoirs (1975), and conversations with people who knew William’s, all of which Storms deftly embroidered into this play, is simply mind-boggling.

The only drawback is this deluge of information being offered by Storms takes on the patina of a reading, if not a lecture. Still, this heavily laden, fact-filled script gifts us with Williams’ innermost feelings and thoughts, his friendships and love affairs, the people and books that influenced him (writers D.H. Lawrence, Hart Crane, and actress Nazimova), his working process, and his relationship with his parents, and his beloved Glass Menagerie spawning sister Rose. Her extremely moving story, which runs throughout the play is simply heartbreaking.

Storms last performance at the Cell Theatre will be Sunday, June 27. To purchase tickets, go to www.spincyclenyc.com or call Ron Lasko at 212-505-1700. Also in the works for this coming September 2021 is a filmed version of Rising Tennessee.

Next on Jacob Storms calendar he will be performing Rising Tennessee at the is the Rochester Fringe Festival September 14-25. The exact dates (still undetermined) will be posted on their website mid-August. www.rochesterfringe.com.