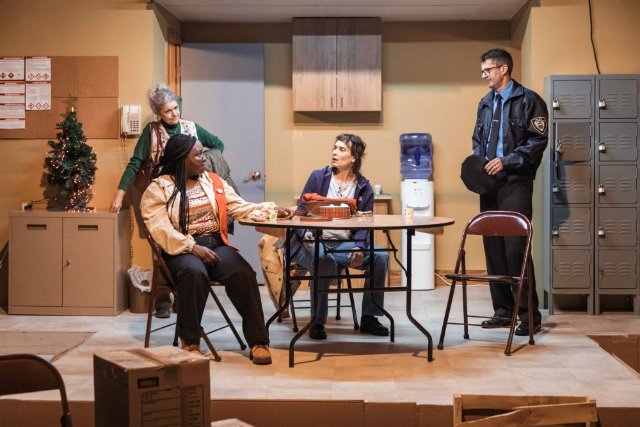 Paris is a workplace comedy or more accurately, a tragicomedy. It’s tinged with sadness, tainted with racism and with the despair of workers in low-paying, dead-end jobs. It’s set during Christmas season 1995, but the intervening 27 years haven’t brought much improvement in the lives of retail workers. And this Paris is in Vermont, not France. The workers aren’t employed in Galeries Lafayette, but in a down-at-the-heels big box store named Berry’s.

Jonathan Berry (no relation) directs this script, the midwest premiere of a debut work by playwright/actor Eboni Booth, a Vermont native. It’s the first production in Steep Theatre’s new home, a short walk from its earlier home on Berwyn Avenue.

The story is about Emmie (Amber Sallis), a young woman who has returned to her home town and is trying to make ends meet working a couple of jobs. We meet Emmie as she applies for a job at Berry’s. She and manager Gar (Terence Sims) are the only Black workers in a white workplace in a white town. She’s happy when Gar offers her a job at the starting rate of $5 an hour (about $9.60 today); she’ll be working in the warehouse and stock room for now. No overtime, no holiday bonuses, and security will check your bags at the beginning and end of every shift, Gar informs her. But her schedule allows her to keep working nights as a server at a local bar and entertainment spot named Blonde Jovi.

In scene 2, it’s Emmie’s fourth day at Berry’s; she’s labeling sweatshirts in the warehouse and mixes up the numbering system with unfortunate pricing results. She’s also suffering with a cheek injury from a fall and bleeds on some of the garish schoolbus yellow shirts. Her colleagues Wendy (Lynda Shadrake) and Logan (Alex Levy) are sympathetic and try to help her out by over-explaining to Gar.

Another colleague, Maxine (Michaela Petro), represents the financial horror of this low-wage life. She’s a single mom with four kids and they all live in a hotel room behind Costco. In a nod to the past when blue collar workers had middle class lives, Maxine tells Emmie how her mom worked in a factory for 29 years, had health insurance and dental insurance and got a paid vacation. “I’d body slam a nun for a factory job, my God,” Maxine says. Max is also furious because she was docked for taking an extra minute for a bathroom break.

Economic ironies and not so subtle racism abound in Paris. The company purports to value employee loyalty and diversity and of course, the orientation video that plays in act one is solidly anti-union. The company wants to “celebrate diversity and honor the many voices that contribute to America’s glory. But we also want a workforce that is uniformly diligent, and should you come across anyone trying to unionize … you should notify management immediately.” One worker comments to Emmie about “your people” and Emmie laments that she couldn’t get a job at another store “because they don’t put Black people on the registers.”

.In this tragicomedy, Emmie is our hero, desperate to keep her job at Berry’s and improve her situation by working nights at Blonde Jovi. Logan needs his job so he can work on his music on the side; he’s frontman for a white rap band and does a cringeworthy rap demo for Emmie. Everyone needs to keep their jobs in this anti-union, no-benefits retail store. Many chains of this type have disappeared over the last two decades (we said bye to Kmart, Sears, Woolco and Montgomery Ward stores long ago). Today there’s a glimmer of resurgence in the union movement with a few successful organizing drives by employees at places like Amazon, Starbucks, an Apple store and Google contractors. However, now Amazon is fighting in court to overturn a successful union election at a Staten Island facility.

Amber Sallis is very believable as Emmie; she’s sweet but tough and realistic about her life. Her fellow cast members create a workplace family of sorts around her, despite harsh corporate policies.

Emmie’s story and those of her co-workers unfurl in six scenes. The naturalistic dialog helps the action move along (except for one seemingly dragged-out scene in the breakroom). Jonathan Berry has directed some fine Steep shows, such as Ike Holter’s Red Rex and Simon Stephens’ Birdland. His crisp direction of Paris makes good use of the floor and the break room on the raised stage in the new Steep space. My one problem with the script is Emmie’s odd injury, for which she says she’s had medical attention. The “bleeding” incident in the warehouse seems stuck in to create an incident. It’s a bump in the road for an otherwise realistic and moving storyline.

Eleanor Kahn is credited as scenic consultant, with lighting design by Heather Gilbert and Conchita Avitia. Daniel Etti-Williams is sound designer and costumes are by Alexia Rutherford. Jennifer Aparicio is stage manager.

The new Steep space is a former church—actually a former Christian Science Reading Room—and the building has elements of prairie style. The 1979 building looks small but once you are inside, feels spacious. Steep is in early stages of renovation. The performance space where Paris is staged has 14-foot ceilings and excellent acoustics. Seating for Paris is about 40 but is flexible up to about 70 seats, executive director Kate Piatt-Eckert said.

Playwright Eboni Booth is a New York writer and actor; Paris had its off-Broadway premiere at the Atlantic Theatre Company in January 2020.  Booth is a graduate of the University of Vermont and the Juilliard playwriting program. She was one of 10 playwrights awarded a 2021 Steinberg Playwright Award, given annually to up-and-coming American playwrights.

Booth said recently in an interview, “I want to write the stories that are alive inside of me and that are born of my joy, my pain, my sadness, and my questions, and that’s very much informed by being Black and by being in this world.”

Paris continues at the new Steep Theatre, 1044 W. Berwyn Ave., through July 23. Running time is 90 minutes with no intermission. In celebration of its reopening, tickets are free for performances Thursday-Sunday. All performances are currently sold out but Steep is working on expanding seating; you can sign up for a waitlist. Note that the nearby Berwyn Red Line station is temporarily closed; the Red Line stations at Bryn Mawr or Argyle are options.

Proof of vaccination must be shown for entry and masks are worn over nose and mouth while you are in the building.