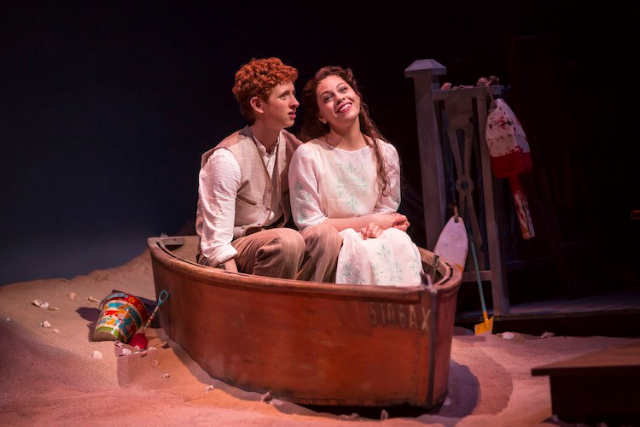 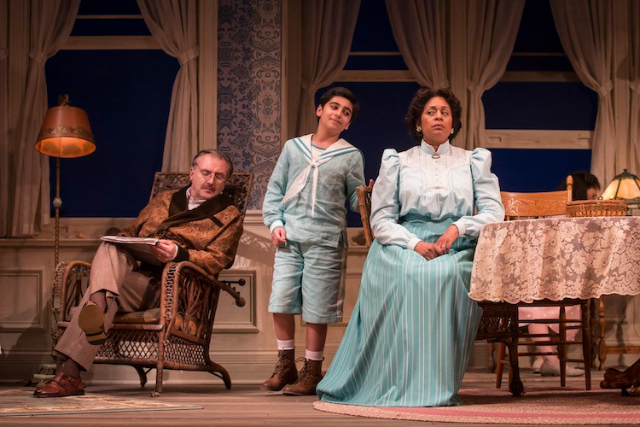 Ah, Wilderness!, Eugene O’Neill’s only comedy, is a charming, light-hearted play with an element foreign to most O’Neill scripts: a happy ending. The hero, teenaged Richard Miller (truthfully played by Niall Cunningham) is a young man who loves poetry and radical thought, and ends up winning the love of the girl he adores.

Goodman Theatre’s new production, performed on a beautiful set designed by Todd Rosenthal, gently creates the mood of the 4th of July in an oceanfront house in 1906 Connecticut.

The 2.5 hour play (one intermission) is carefully directed by Steve Scott, who grasps the nuances needed in performances by Richard as well as his parents, Nat Miller, a newspaper publisher (Randall Newsome) and Essie Miller (Ora Jones). Essie fusses, as only a mother can, over her children’s absences and Richard’s choice of reading matter (Oscar Wilde, Bernard Shaw, Swinburne and The Rubáiyát of Omar Khayyám).

.The play tells the story of one day in the life of this family as young people light firecrackers, visit the beach and go on picnics and the oldsters take a drive out to the lighthouse.

When Richard is invited to meet a friend of Arthur’s (and two women) at a disreputable saloon, the stage is set for a young man’s first venture into the seamy side of life.

Richard is the opposite in many ways of Edmund, the younger son in O’Neill’s great tragedy, Long Day’s Journey Into Night. Edmund is a poet too and a radical thinker (he’s portrayed as older than Richard) but he succumbs to the family affection for liquor, as well as to a case of tuberculosis. Richard has his first drink in a seedy saloon and gets very sick.

Truly, Ah, Wilderness! and Long Day’s Journey Into Night are companion pieces in many ways, including being set (most likely) in the same house in New London, Connecticut—now known as Monte Cristo Cottage. It's where the O’Neill family spent summers when actor father James O’Neill took time off from  nationwide tours with his production of The Count of Monte Cristo. Ah, Wilderness! might represent an idealized childhood and family, while Long Day’s Journey represents the grimmer reality of O’Neill’s life.

Both plays even have Irish maids (Norah played by Bri Sudia in Wilderness), who keeps the house and family in order, as her counterpart Cathleen does in Long Day’s Journey.

Ah, Wilderness!, as I noted above, is a sweet, light-hearted summer play and Goodman’s production is very good, with a few fine performances. But the first act drags and is quite long at 90 minutes and the play lacks the depth and intensity of most of O’Neill’s work. If you like serious theater, you would prefer to see Long Day’s Journey Into Night, Moon for the Misbegotten or The Hairy Ape.

The Goodman production does excel on all matters of staging. Aaron Spivey’s lighting adds dramatic elements to Rosenthal’s scenic design, while Richard Woodbury’s sound design and music add some humor as well as mood, as in a few bars of percussion during a table-setting scene. Costumes are by Amy Clark, who emphasizes the setting with sea greens and sky blues for the women’s costumes.

Ah, Wilderness! is one of O’Neill’s later plays, premiering on Broadway in 1933. In 1959, it was made into the Broadway musical Take Me Along. The title is adapted from a line in one of Richard’s favorite poems, The Rubáiyát of Omar Khayyám.

Ah, Wilderness! continues at Goodman Theatre, 170 N. Dearborn, through July 23. Performances are Tuesday-Sunday with two performances on Thursday, Saturday and Sunday. (There are some exceptions to this schedule, so check the website.) Buy tickets for $20-75.