Timely Revival of Issues Based Musical 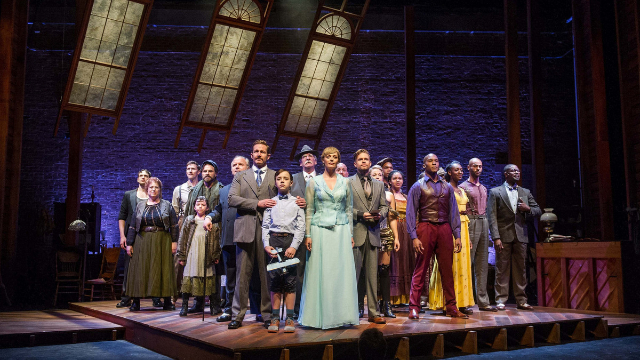 On every level the revival of Ragtime, a 1998 Tony winning musical, is big. The relatively modestly scaled stage is jam packed. There is a huge cast and enormous, weighty ideas. They threaten to bust the walls out and flood the audience with a tsunami of ideas and roiling emotions.

It's also long with a ninety minute first act, which initially inches along, an intermission, then  roller coaster second act clocking in at just under three hours. Time flies when you're  having fun. If, that is, you stay awake during all the plot and sub plot exposition of way too many characters and content in the early going.

The momentum eventually slides into cruise control once the essentials are nailed down. But bear in mind that the vehicle of choice that takes us through a plot heavy and ponderous musical is a vintage Model T Ford.

The now antique car is a plot point as what evolved to be the lead character, a black man or "negro" in this musical drives down as street in a "whites only" part of town with disastrous results. Some tough volunteer firemen of Irish heritage refer to Coalhouse Walker Jr, superbly played by Darnell Abraham, with a term less polite than negro.

A polished, articulate and educated man he makes his living playing ragtime piano. That means a life on the road away from his sweetheart Sarah, superbly played by Zurin Villanueva. She is taken in by Mother (Elizabeth Stanley) who finds the illegitimate baby in the garden. This does not set well with Father (David Harris) when he returns from a year-long exploration of the Arctic with Commander Perry.

In 1904, the era of this musical set in New Rochelle, New York, the catch phrase all over America was "Meet me in St. Louis"  with its World Fair.

Scott Joplin (1868-1917) had moved there in 1901. He had a hit with "Maple Leaf Rag" in 1899 but mostly struggled after that. More than just a composer of piano music he wrote two operas one lost and the second "Treemonisha" now regarded as a masterpiece but rarely performed.

His original music is conveyed by piano rolls which preceded sound recordings during the era of jazz that eclipsed ragtime. The all but forgotten music of Joplin and his peers was revised in a Joshua Rifkin recording. Then became mainstream when Marvin Hamlish took Joplin's "The Entertainer" to score the hit film The Sting  in 1973.

There is a lot of music in this production, the program lists some 32 songs, but little if any of it in the syncopated time signature of ragtime. There are hints of it when Coalhouse sits at the piano but the sound comes from the pit with its ten piece orchestra.

In the best selling novel of  E. L. Doctorow, and the sprawling musical based on it, Ragtime is not about the music but rather a signifier for an era. It provides an arch like that in St. Louis overhanging a grim cultural spectrum. It was a not so innocent time of mass immigration, grinding tenement poverty, and brutal exploitation of labor for the obscene enrichment of the robber barons. There are such players as rabble rouser and I.W.W. organizer, Emma Goldman (Anne L. Nathan) and fat cats J. P. Morgan (Allen Kendall) and Henry Ford (Eric Jon Mahlum).

Does any of this sound familiar? Which is surely what Julianne Boyd was thinking of when programming this "timely" musical while a fool on the hill is President of these United States. It is a time when many of us are  proud to be Americans but deplore the meanness of our government.

In recent years the book has all be disappeared from Broadway musicals. For example, check out the juke box musical Million Dollar Quartet at Berkshire Theatre Group. Critics deplore this dumbing down but there is a good reason for the trend. Audiences paying hundreds of dollars for prime seats on Broadway want to be entertained not "educated." For that we have books and PBS.

Your head spins trying to keep up with all the minor characters and their subplots in Ragtime. Do we really need to know about Evelyn Nesbit, the Girl on the Red Velvet Swing (a screechy performance by Leanne E. Street) or magician Harry Houdini (Joe Ventricelli) who isn't around long enough to make much of an impression?

A single character Tateh (J. Anthony Crane) and his daughter do heavy lifting as signifiers for all Eastern European Jewish immigrants. Through fast forward legerdemain he morphs from cutting silhouettes for a nickel each to becoming a first generation silent film director. The character seemed plucked from a chapter of the Stephen Birmingham book "Our Crowd."

When the smoke clears leading to an explosive finale most of those diverting minor characters and tangled threads of sub plots give way to the main events of class war and race. While significant, it is a simplification of global issues then looming ominously.

The true elephants in the room are the guns of August, 1914 which launched World War One. Just prior to that, in 1913, were the Patterson New Jersey strike and the arrival of the European avant-garde with the Armory Show.

A negro/ anarchist alliance to take up arms and blow up the Morgan Library is pure fiction. Booker Taliaferro Washington (April 5, 1856 – November 14, 1915) and his policy of appeasement is more aptly played by Lawrence E. Street. Yes, there was the Nat Turner rebellion of 1831 but the reality of militant blacks evolved decades later with Malcolm X. ("By any means necessary.") and the Black Panthers in the 1960s.

For the most part the inventive and apt direction of Calarco kept the sprawling behemoth somewhat focused. The highlight of that effort was evoking generally superb performances from the primary players. He and musical director, Darren R. Cohen, had awesome talent to work with.

The bare brick rear wall of the stage in a design by Brian Prather reminded us that the play's the thing. With so many scenes and characters, with props rather than elaborate sets, that helped in these transitions.

Costumes by Sara Jean Tosetti were apt for the period but the primary characters wore the same outfits all evening. With so many characters to dress this was likely a financial decision.

Barrington Stage is rightly lauded for mounting terrific productions of vintage musicals. It has another agenda of  educating audiences with socially relevant massage plays.

With Ragtime arguably there was an effort to conflate those agendas by mounting a socially and politically "timely"  musical. To be honest, last season's Pirates of Penzance was a bit of a froth but a heck of a lot more fun.