A Raisin in the Sun at Williamstown 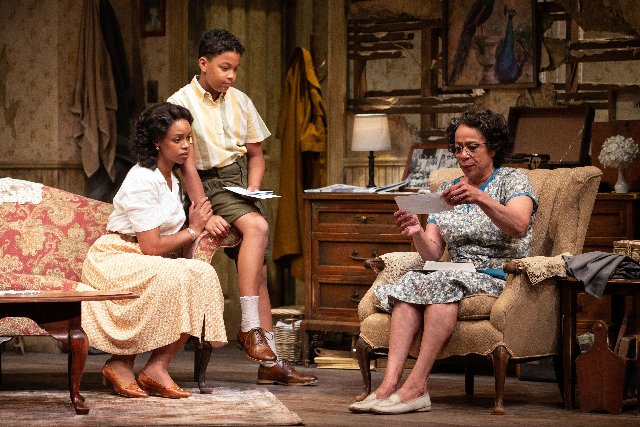 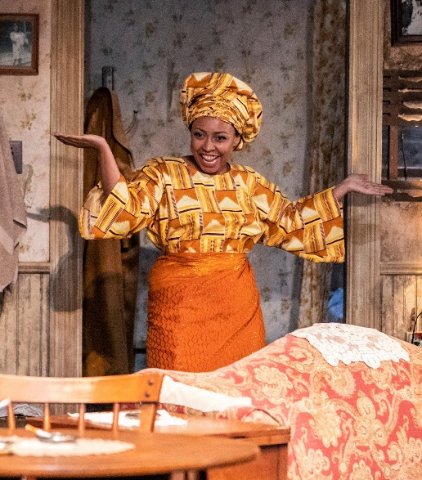 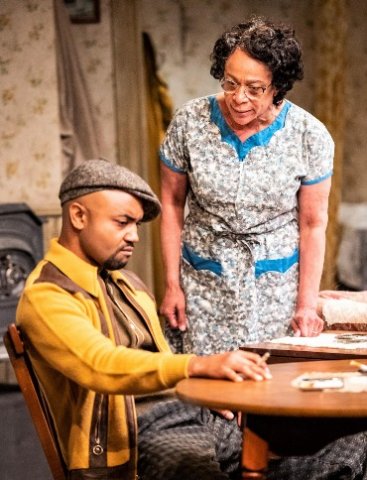 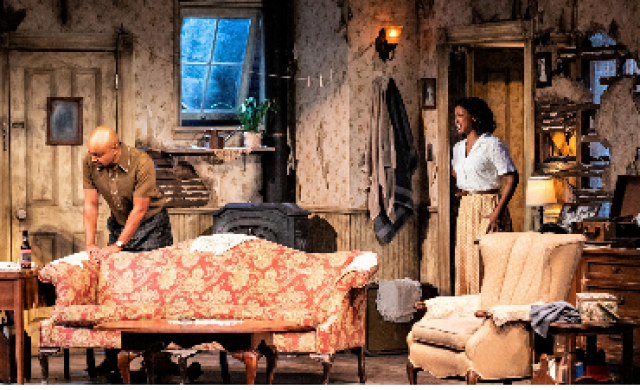 Launching the Williamstown Theatre Festival is a Main Stage production of Lorraine Hansberry’s (1930-1965) iconic Raisin in the Sun. In 1959 it was the first play by an African America, female playwright to be produced on Broadway.

The heart of the Younger family drama focuses on internal tensions and external opposition of purchasing a modest home in the white, middle class neighborhood of Chicago's Clybourne Park. The matriarch of the family Lean Younger, in a magnificent performance by S. Epatha Merkerson, conveys that she has purchased property in the white neighborhood at roughly half of what it would have cost to move to a black community.

The iconic play was based on personal experience. Hansberry's parents bought a house in the white neighborhood of Washington Park. It resulted in a legal case (Hansberry v. Lee, 311 U.S. 32 [1940]). The Hansberry home was purchased in 1937.

A representative of the neighborhood association Karl Lindner (Joe Goldammer) attempts to bribe the family with an offer to purchase the home for more than they paid. In a plot point it is a tempting offer. Through the foolish actions of Whitney Lee Younger (Francoise Battiste) all but the $3,500 down payment of a $10,000 nest egg has been squandered. By flipping the real estate deal, as family spokesperson, he has the opportunity to get back some of the lost money. Profiled as a coming of age moment he turns down the offer.

Decades later Clybourne Park, a 2010 play by Bruce Norris, revisited the neighborhood. By then it had transformed from white to black. The Norris play, which won a Pulitzer Prize and 2012 Tony Award for Best Play, came full circle with the theme of gentrification. The play had numerous regional productions.

There have been generations of productions of Raisin in the Sun. Merkerson performed in one of them in the role of Ruth Younger who is stunningly portrayed here by Mandi Masden. True to its aesthetic mandate WTF is offering a fresh take on a classic under the mixed efforts of director Robert O’Hara. In program notes he stated that he opted  not to present the play as a museum piece.

Theatre is a living art form and every production should be approached as a potential new work. When a classic play is updated, however, care must be taken. There is a delicate balance between what to retain or change.

O’Hara, has added the deceased elder Younger. The uncredited actor is visible, or is he, to his widow. He even lip syncs some lines. While his memory and legacy hovers over the family the director has made him palpable.

Other changes of O’Hara entail staging and lighting. Early in the two act play (reduced from three) the animated family interactions are inaudible. Characters are talking at not to each other. It is challenging to follow the dialogue. Then, through a hole in the roof of the shabby apartment, there is blinding light in a ersatz spiritual moment.

What endures of Hansberry is a superbly crafted play and minutely defined characters. She was a social justice activist whose writing was more naturalistic than avant-garde. The significance of her work, generations before “Black Lives Matter,” was putting a black family on Broadway. Engaging the challenges of the Youngers in the late 1950s a contemporary audience is aware of how little has changed from then to now.

The 60th anniversary tribute has been given the professionalism one anticipates from Williamstown Theatre Festival.

This includes superb scenic design, Clint Ramos; costumes, Alice Tavener; lighting, Alex Jainchill and sound by Elisheba Ittoop. They have given a terrific cast everything needed to bring life to the Younger family. The squalor of their run down apartment has been depicted in every shabby detail. Perhaps there is too much realism in pealing paint and chunks of wall revealing lattice in areas of missing plaster.

It is the apartment that Lena and her husband moved into when they married and raised a family. There are two adult children,  a married son with family, and daughter, Beneatha (Nikiya Mathis), a still single medical student.

They are all living in the cramped apartment including Travis Junior (Owen Tabaka) the juvenile son of Walter Lee and Ruth. He sleeps on the sofa which is the compelling metaphor of the matriarch’s dream of providing a home and a room of his own. Tabaka is adorable and holds his own with the other actors.

The play begins at 7AM with Ruth in a house coat making coffee. She has to get Travis up and ready for school. By 7:30 it is important that Walter Lee not be late for his gig as a chauffeur. Then Benethea adds to the morning confusion. Family routine is difficult to follow given chaotic staging and resultant cacophony. That overwhelms our appreciation of Masden's subtle, articulate and well crafted role as Ruth. Her responses prove to be the canary in the mine shaft of seismic events that threaten to destroy the family.

There is confusion created by the set design. The living room/ dining area and kitchen are smashed together. Sink and cabinet are separated from the stove by an all purpose door. It doubles as access to the single bathroom as as well as main door to the outside world. This defies logic particularly when other characters come calling.

Things fall apart, and it appears that the move is aborted. The dissapointed matriarch muses that perhaps, as she always intended, they will fix up and make do with their apartment. It raises the question of why that has never happened. There have been men in the house, her laborer husband and grown son. Why over the decades would they never patch and paint? It doesn’t take deep pockets for minor, cosmetic home improvements.

As the family is up and about with morning routines there is much discussion of ‘The Check.’ The life insurance is due to arrive that day. While it will be made out to the widow, and her decision as to what to do with it, other family members have hopes and dreams.

The hot headed Walter Lee, in an over the top, blustery and flamboyant performance by Battiste  has plans. He wants to invest all of the $10,000 in a liquor store with two of his homies. He has entrepreneurial fantasies that fill us with dread of the inevitable. This wannabe head of the household is a fool.

It is the women who have all the smarts as his stupidity nearly destroys the family. As a keenly observant woman, and student of W.E.B Du Bois, to what extent was Hansberry depicting a paradigm of the emasculated African American male? How much history and sociology is written into the character of Walter Lee?

While drinking and gambling his way on a fast track to nowhere his sister, a surrogate for Hanseberry, is determined to make something of herself. Ruth, now pregnant with a second, unwelcome child, is doing her best to hold things together. She is a force and will emerge as the matriarch of the next generation. Hansberry depicts the African American Younger family as a matriarchy.

In this play they stay together under one roof but that’s not the norm. Through drugs, gangs and crime too often children are raised by single mothers and grandmothers. Travis represents hope and love but an enormous challenge. Asked what he wants to be when he grows up the child answers “a bus driver.” His father is struggling to reach beyond servitude as an ‘invisible man.’

When the check comes Lena takes a walk. Arriving home she announces that they have bought a nice home. It’s small but Travis will have a room of his own. There is a back yard where she will plant flowers. Over the decades a tree will grow that becomes a metaphor for Clybourne Park.

This seeming good news, however, devastates Walter Lee. He smashes things and goes on a three day bender. That entails borrowing a car and long drives out of the city. These excursions end in drinking until last call.

With uncanny  insight Lena sees that fulfilling her dream has destroyed his. Two thirds of the cash is given to him. Lena instructs him to  open accounts in his name and for his sister’s education. Impulsively he gives all of the money to what proved to be a scam.

In a devastating line what took a lifetime for her husband to earn has been blown in a single day. Merkerson’s character is far too forgiving and compassionate. It is less than credible that she would not express outrage.

Even though he has fallen flat on his face Lena trusts him to negiotiate with the leader of the white neighborhood committee. Ultimately she has made the right decision as her son morphs into manhood. Not that it will be easy as even greater struggle lay ahead.

The WTF production is anchored by superb performances by Merkerson, Battiste and Masden. The play is enriched by other characters and subplots.

Eboni Flowers brought comic relief as the gossipy neighbor Mrs. Flowers in the second act. In a house coat and kerchief she appeared from out of nowhere through that all purpose door. While diverting she wasn’t essential to the drama. There is the dichotomy of Beneatha’s suitors. One is the successful but boring George Murchinson (Kyle Beltran). He may be a good catch but she doesn’t love him. The alternative is the African Joshua Echebiri (Joseph Asagi) who wants to take her home to his village. He dresses her in an African costume, It sparks her imagination and fantasy. An educated man and politician Hansberry provides him with astute lines about the reality of post colonial life in his rural village.

Concluding the drama Hansberry leaves us with hope for a now united family facing an uncertain future. We leave the Youngers on the cusp of the Civil Rights era of the 1960s. Hansberry had no way of knowing what lay ahead. Instead of leaving with her poetic anticpation the director has graphically spelled out what happened next in Claybourne Park. O'Hara has spray painted graffiti over a masterpiece.