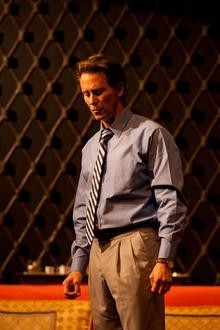 Kennth (Steven Weber) has devised the marketing plan to sell the deadly baby formula in Africa. 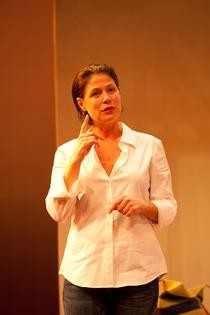 Barbara (Maura Tierney) sandbags his career by telling it like it is to an assembly of company wives.

Three Hotels, by Robin Baitz, is a well crafted, taut play for two actors in three acts. It takes on the broad brush issue of corporate greed and inadvertent genocide conveyed through the personal tragedy and agita of an ambitious, middle aged executive for North African sales of an ersatz Nestle’s baby formula, Kenneth Hoyle (Steven Weber), and his angry, vengeful, righteous wife Barbara (Maura Tierney).

In a sparse evening with a sumptuously pumped up production we have three monologues. The first “The Halt & The Lame” in an elegant suite in Tangier, Morocco (Kenneth),  the second, a fulcrum that fast forwards the drama featuring Barbara “Be Careful” on a beach in a luxury resort on St. Thomas, Virgin Islands, and the resolution focused on Kenneth in a visibly more downscale, tourist class, hotel in Oxaca, Mexico for “The Day of the Dead.”

While luxuriating in an  upscale suite in Morocco Kenneth tells us that he "loves the smell" of the elegant hotel rooms, even in Third World countries. It is among the perks and signifiers of his position. Given the sparcity of the casting the hotels, indeed, are fully credentialed "actors" in this intimate drama.

In his ambitious climb to the top of the ladder Kenneth has turned a blind eye to millions of dead African babies through inadvertent misuse of his company's baby formula. It has been pitched to a Third World market as better than a mother’s breast milk. Because the corporation failed to educate its users the formula has been overly rationed and mixed with contaminated water. The extent to which the company seeking profits from a vast market knowingly marketed and sold a faulty product is never really clear. In its aggressive sales pitch there was no educational component on its proper use.

There are a number of Jewish references woven into the story but in an awkward and unresolved manner. It seems that Kenneth was raised by radical, Marxist, Jewish parents. He and Barbara started in the Peace Corps but defected for the fast track lifestyle. Along the way Kenneth changed his name to the more benign ersatz WASP sounding Hoyle. Indeed is ‘according to Hoyle’ a subliminal in joke here. There are many such subversive themes and subplots. Perhaps too many to be fully realized in a Spartan text in which just two characters convey to us their history, issues, thoughts and feelings.

The narrative evokes comparisons to Bayer the German company that manufactured the Zyklon B used in the mass extermination gas chambers of Nazi Germany. As the mastermind behind North African marketing and sales of the lethal product Kenneth reveals that a colleague has dubbed him “The Albert Speer” of baby formula.

This is of course a devastating moniker for a formerly liberal Jew who, as he reveals to us, turned a blind eye to children with the bloated bellies of malnutrition. He vividly describes having thrust in his face images of piles of dead children arranged next to mounds of dead cattle.

It reaches a tipping point when, during a speech before the World Health Organization in Geneva, he vows that the company acknowledges its responsibility and will initiate changes. We wonder if this is a fatal career move. Certainly there was risk taking but he informs us, with some uncertainty, that the company is behind him.

How could one not be concerned with such a horrific issue?  The play is intent on evoking a knee jerk response from us. It is designed as a head snapper and ploy to make us care about this small, intimate play, taking on a huge agenda.

The device of a clever playwright, Baitz, is to convey the really horrible stuff through constant shifts of scale. We teeter back and forth from micro, the story of a troubled husband and wife ensnared in the greed and ambition of the corporate life, and the macro, genocide. Corporate crime is conveyed through descriptions of all those dead babies.

Along the way we are intended to be shocked and horrified by the willful calculations of Nestle, no better than Bayer (yes the aspirin folks), through the device of being absorbed by the personal stories of Kenneth and Barbara.

A vivid signifier of the micro/ macro shifts in the play are the elegant production values provided by WTF. In the first act Kenneth is wonderfully dressed by Susan Hilferty in a truly magnificent, sleek, modernist set by Thomas Lynch, that has been elegantly and tastefully lit by James F. Ingalls. One simply could not imagine a more exquisite production.

But is it enough to make us care and invest in a character literally dwarfed by his surroundings? There is little or no movement and action. Everything is conveyed through the voice of the actor. This could be an effective radio play. One of the few dramatic flourishes occurs when Kenneth presses a button and a broad curtain, the width of the stage, shuts out the glare of the hot African sun.

For most of the first act monologue Kenneth sits and nurses a martini. He is awaiting the arrival of a junior associate whom he intends to fire. We learn that he rather likes that aspect of the job. He takes pride in terminating colleagues with professionalism and panache. He assures us that the individual in question is a pro who will understand the game.

This ruthless disregard in destroying the careers of junior associates signifies Kenneth’s Faustian pact with the devil selling his liberal soul for greed and power. The analogy is a bit too formulaic for us to care. He is hardly on the level of Ronald Reagan or Elia Kazan. He is just a worthless piece of corporate shit sewing seeds of mayhem in North Africa. Here Baitz is striving for a bridge too far. It is, of course, a dramatic device for the reversal, in the third act, when Kenneth, you guessed it, has been sacked.

During the second act, through Barbara’s far more compelling dialogue, we learn why. Kenneth has alluded to their marital tensions. But Barbara lays a whammy on us. For the past two years she has missed the annual corporate gathering. It has meant making excuses and apologies through Kenneth. While he holds the job the wife is viewed as a key asset of the team.

In the Third World corporate environment that means that the wife presides as hostess. It entails entertaining dictators and junta generals in her home. Or making polite small talk with the wives of African leaders at golf clubs. In such postings wives are used to living beyond their means in elegant surroundings with a staff of servants.

After a lapse of a couple of years, Barbara, wearing a crisp white shirt and jeans, has opted to attend the company event. She has been warmly welcomed back as a part of the corporate family of baby killers. For the occasion she is invited to address the assembled wives and give them some tips on life in the Third World countries to which they are posted.

Instead  of the expected gloss and froth, Barbara has decided to tell it like it is in a speech with a dominant theme “Be Careful.” She conveys the tragic mistake of giving her only child, a son, an expensive watch. He wore it to the beach which resulted in robbery and murder. This tragedy is conveyed vividly to a shocked audience. One of the wives has even taped the speech.

In the third and final act Kenneth relates that it took a delay of some three hours for him to be terminated. Even though it was Barbara’s action that results in his immediate dismissal. In a tourist class hotel room in Mexico, yes that Hotel thing, he is recording a message to his mother in Baltimore. He can’t keep up the expensive payments for her managed care.

He has returned to Mexico as an environment they always enjoyed. It is the time for the Day of the Dead festival. Of course there is a poignant parallel in the manner in which Mexicans mock and play with death through celebration and irony. Children are given candy in the form of skulls and bones. This is a context for conveying the loss of a son and anger at the corporation that he opted to continue to work for.

The layers are piled up with emotional frosting intended to unify the elements into a tragic confection. But there is so much to absorb that, well, it’s a bit hard to swallow. Riddled with guilt, insight and remorse, in this reversal the arrogant Albert Speer of the first act, has been reduced to an Oedipal, blinded vagabond condemned to exhile in a series of cheap hotels. He hopes that Jocasta/ Barbara will join him.

In a final flourish of this production, the sides of the hotel room open up to reveal a simulacrum of the Day of the Dead as an illuminated nightscape. For just a moment Barbara walks by leaving us to speculate on their future as a couple. It is the only time in which they are together on stage.

This was an evening of theatre bound to evoke a broad range of opinions and reactions. With impunity one might praise superb actors, a magnificent production, and a compelling script. Or, like me, feel the ennui of the underwhelmed. With all of the shades in between.