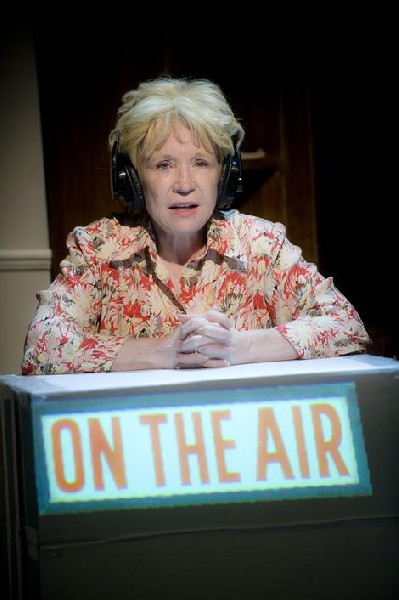 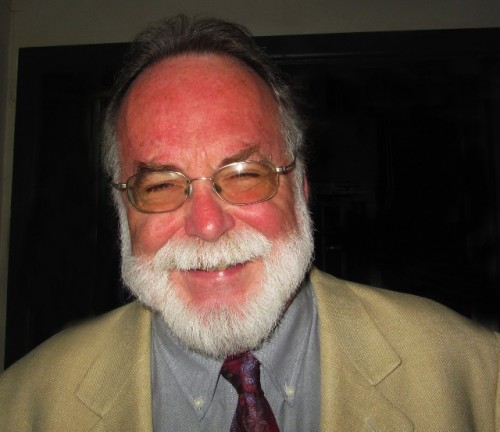 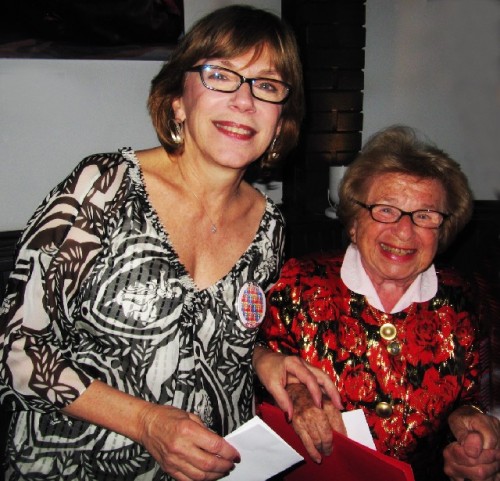 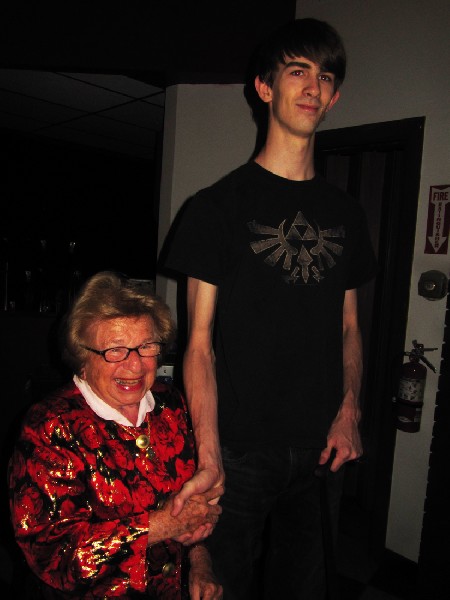 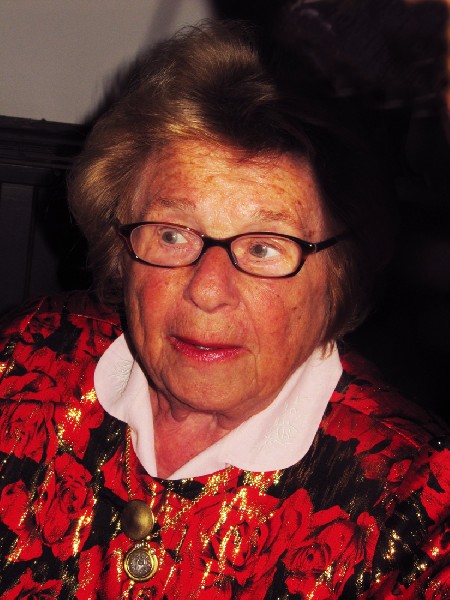 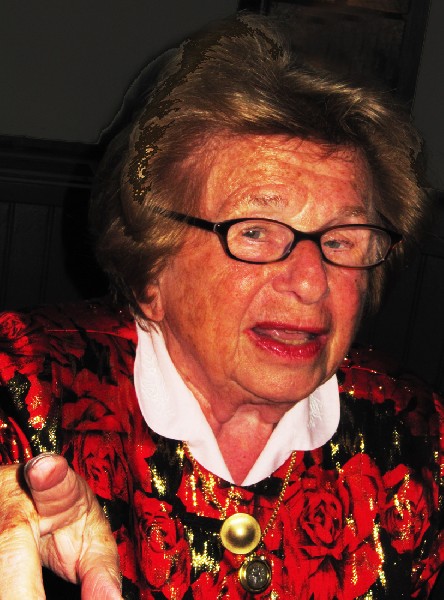 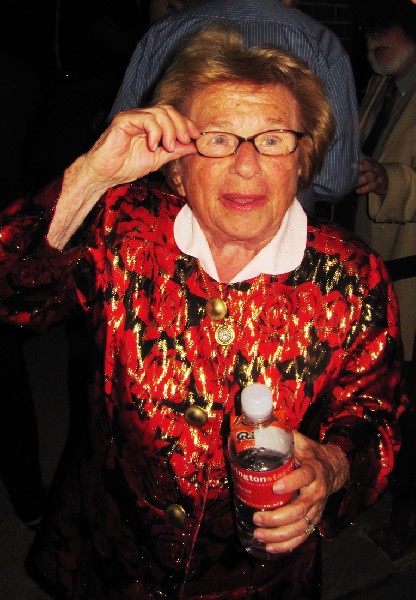 A reflective moment during an evening of celebration. 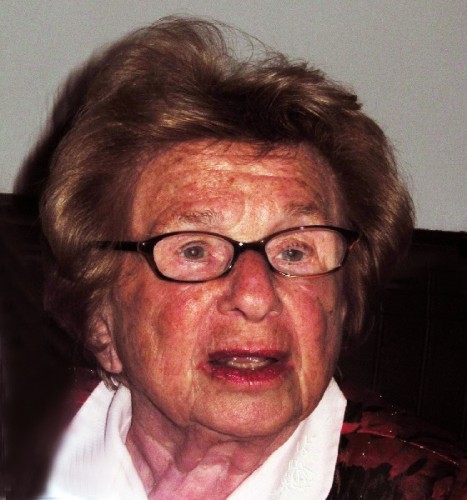 Try it with whipped cream.

At four feet and seven inches Dr. Ruth K. Westheimer has been a towering presence casting an enormous shadow over American popular culture.

In a thick, inimitable accent, a mélange of her native German, Hebrew, French and English, with puckish humor and scholarly insight she broke a taboo in 1980 by frankly dispensing advice on sex to callers in a fifteen minute, midnight show at WYNY-FM in New York.

The show was a sensation and soon expanded to an hour. It was picked up and syndicated nationally and in Canada. In today’s media terminology it went viral. It transformed the sociologist, educator and sex therapist into a celebrity and beloved icon.

Surrounded by family and grandchildren, Dr. Ruth, born Karola Ruth Siegel in Wiesenfeld (Karlstadt), Germany, the only child of Orthodox Jews Irma (née Hanauer) and Julius Siegel, June 4, 1928, was in the audience last night for the world premiere of a play depicting her remarkable life story.

More than just present for the opening night of Dr. Ruth, All the Way, by playwright Mark St. Germain on the stage recently named for him, she held court. First at a table in the lobby and then from her seat in the middle of the house.

An Associate Artist and Board Member of Barrington Stage Company it was St. Germain’s  sixth world premiere with artistic director Julianne Boyd who was the director of this production of a one woman show starring Debra Jo Rupp.

In an interview with Larry Murray of  Berkshire on Stage Dr. Ruth revealed that “And for your readers, in case they don’t know it yet, I’m telling you it’s going to go off-Broadway. So now they know.”

She is an avid theatre goer and we learned that she has seen Phantom of the Opera some twenty times. Also she has seen St. Germain’s Freud’s Last Session at least seven times visiting back stage with the actors. One of them suggested the topic of Dr. Ruth to St. Germain and the play has gelled with intensity in just six months. Even for the productive St. Germain that’s warp speed.

Before the performance we asked him about the status of Best of Enemies which premiered at Barrington a year ago. “We have a new producer and I’m very optimistic” he said. I asked about progress on a new play commissioned for the Contemporary American Theatre Festival in Shepherdstown, West Virginia. The American Theatre Critics Association has scheduled its annual meeting during the event next summer. Hopefully we will attend. “I haven’t started work on that yet” he commented. There is another project in the works for Barrington which he put on hold to fast forward Dr. Ruth for this season.

In general, St. Germain creates plays, works of art, based on researching the biographies of historical figures. For Best of Enemies he was able to work with most but not all of his subjects. In the new work he has his most high profile living subject. Which comes with pros and cons.

On the one hand he had the complete cooperation of Dr. Ruth, her written and oral history as well as access to rare memorabilia which has been incorporated into the play through projections designed by Brian Prather.

The challenge is that everyone has an indelible image of her endearing persona and quirky accent. For the superb actor Debra Jo Rupp it may be the most difficult role of her career and among its greatest triumphs. Imagine how daunting to perform as such a high profile character who is in the audience (for several nights) loving every minute of it.

Dr. Ruth has an amazing life and harrowing story to tell in a trajectory from Holocaust survivor to Pop icon. Consider, however, the degree of difficulty to cobble those unique and compelling elements into a cohesive work of theatre.

What we experienced last night was the precise synergy of a singularly riveting character, a charming, witty and at times emotionally wrenching flawless performance by Rupp, a meticulously crafted text by St. Germain and the flawless direction of Boyd.

During past interviews with St. Germain and Boyd they have both described the intricate process of shaping and rewriting a play while in rehearsal. There are so many clever theatrical devices that can only result from a free and generous collaboration.

St. Germain has created a wonderful context and setting for Dr. Ruth to tell her life story in two acts. After 38 years in a New York apartment she is packing to move. It is 1997 just a few months after the death of her third husband Manfred Westheimer. There are numerous interruptions through phone calls including Miriam a daughter from her second marriage. She had a son Joel with Westheimer.

Miriam asks if her mother is running away from an apartment so full of memorabilia, books and evocative of his presence. “I never ran away from anything in my life” is her sharp response.

The audience which Rupp addresses directly are her visitors and companions through a lonely ordeal. Like a gracious host she thanks us for being there. In a attempt to cut short those phone calls she begs off saying that she is entertaining guests. During one hilarious moment she dashes off stage returning with two bags of pretzels to be passed around and shared by the audience. Then, with a stretch of the truth, she tells a caller that she has to go because she’s having a nosh with friends.

In a conflation of art and life Rupp’s character just loves being on stage. There are clever moments when she breaks the fourth wall by ordering lights, or the dim sound of a music box to be raised and lowered. She revels in those magical moments. Returning for the second act she asks if we like her new costume.

We see the view from her apartment looking down on the George Washington Bridge at one edge and the Tappan Zee Bridge at the other. That view constantly morphs. While packing she will show us an item like photos of her parents and grandmother. The images are enlarged behind her.

In one hilarious sequence she sings along with a video projection of Tom Chapin. They recorded the song “Two Kinds of Seagulls.” She has repeatedly told us she can’t sing which makes this ditty about mating in the animal kingdom all the more hilarious. She adds to this an ersatz Shirley Temple dance.

While Rupp’s Dr. Ruth is mostly loveable and matronly there are shifts to the horrors of surviving the Holocaust, emigration to Israel, poverty in Paris, and the struggles of a single parent in New York pursuing advanced degrees.

She was among 300 Jewish children allowed to emigrate to Switzerland on one of several Kinderzuege (Childrens' Trains) to different nations willing to take a minuscule number of the million plus German children. Great Britain took a larger number and the United States none at all.

The single valise she carried included a precious monogrammed towel (which she still has) and a doll with a turtle stamped on its back. On the train she gave the doll to a younger girl who needed her more than she did.

There were harsh realities in the Swiss orphanage. The children were told that they were given away by parents that didn’t love them. They were segregated, made to work, and not allowed to play with Swiss children. Always looking at the positive side she described the bonding among the orphans forming a family. She read from the last letters of her parents and grandmother which stopped in 1941.

After the war she emigrated to Palestine and, at 17, joined the Haganah as a sharp shooter. She was a small target and fast which were advantages for her job as a messenger. During an explosion part of her foot was blown off but with rehab she struggled to walk again.

She described the libido of young people as like trying to hold down the lid of a pressure cooker. If you let go it goes pop. In Israel "I went pop." The kibbutz enouraged lovers to move in and get married. But she got assigned to a job in Jerusalem and the marriage lasted just a year.

In Paris she pursued a degree at the Sorbonne. A windfall of 5000 Marks ($1,500) from the German government for having been denied education allowed passage to America. Two days later she applied and was accepted with a scholarship to the New School. "Only in America" she told us. Soon pregnant she married and divorced.

Both acts end on the somber note of the death of her third husband. The end of the second act is particulary harrowing as she descibes in detail the three separate units and functions of Auschwitz where her family was likely to have perished.

Holding up a photograph of her four grandchildren (who were in the audience last night) Rupp/ Dr. Ruth poignantly tells us how she "won" in her personal battle with Adolph Hitler.

It was a riveting conclusion to a powerful evening of theatre. The incredible story of a diminutive woman and courageous survivor was writ large. This production is a tribute to the remarkable accomplishments of the creative team of Barrington Stage Company. Truly, the whole is greater than the sum of its parts.