Behind the Scenes with Wilco at Mass MoCA

I Was a Solid Sound Rockumentary P.A. 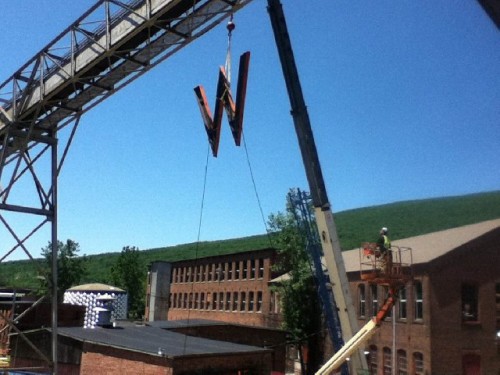 Lifting the W into place. 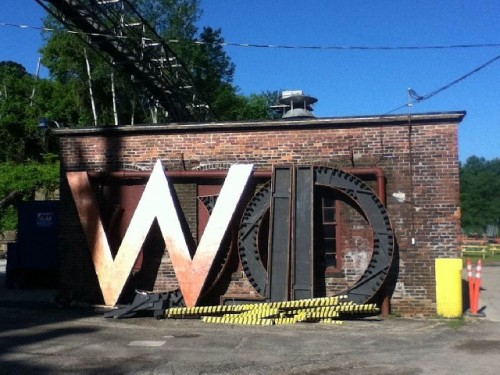 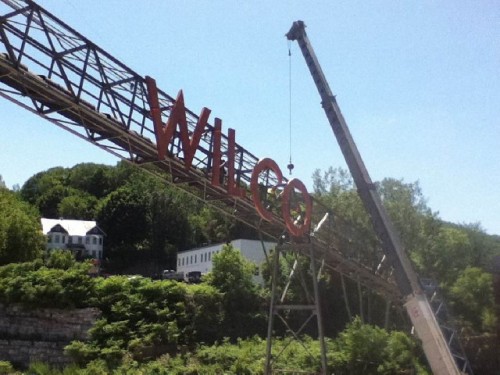 the lettering mounted to the old coal shoot. 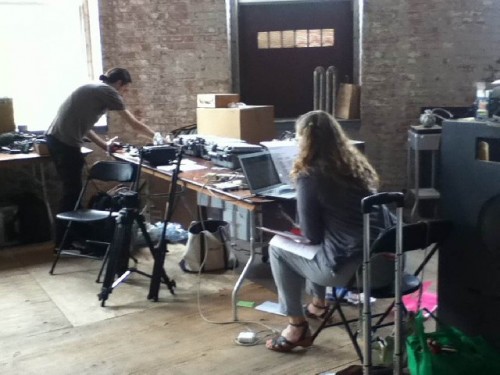 The production office back stage. 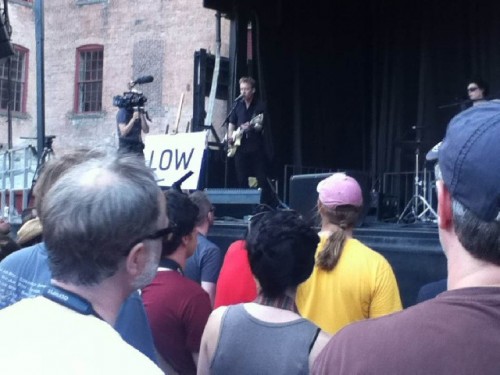 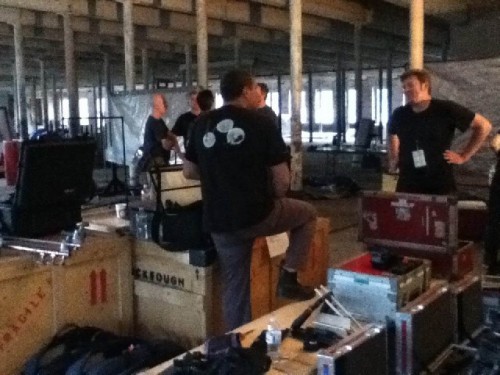 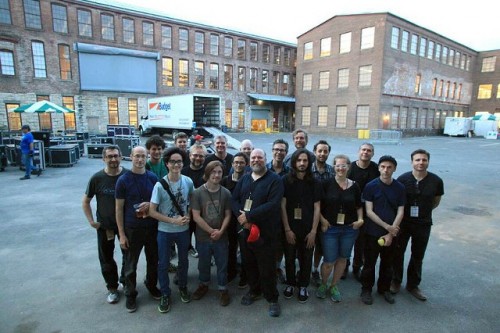 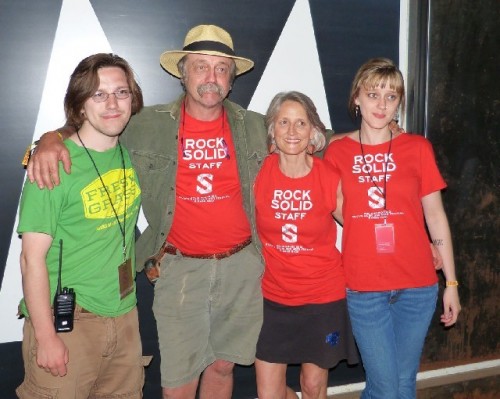 Moca’s Criddle Family with Jack on the left. Giuliano photo.

My family has been a part of MASS MoCA’s history since we moved to the Berkshires from England in 1998. My father, Richard Criddle, became the Director of Fabrication and Art Installation at the museum. My sister, Phyllis, and I both worked as seasonal art preparators during the summers of our teens. She’s now a fashion designer, and manager of MoCA’s retail operations. Meanwhile, I moved to New York to go to school and pursue a filmmaking career. When I heard that a documentary crew would be capturing this year’s Solid Sound Festival, and that they were looking for production assistants, I jumped at the chance to help.

I’m not intensely familiar with Wilco’s entire body of work, although, like just about everyone my age, there are much-played copies ofYankee Hotel Fotxtrot and Summerteeth in my CD collection. However, as a music fanatic, and a student of documentary filmmaking, I’m a big fan of “rockumentaries” and concert films, my favorites being Martin Scorsese’s The Last Waltz and Jonathan Demme’s Stop Making Sense.

TrixieFilm, the D.C.-based company producing the as-of-yet-untitled Solid Sound movie, has an impressive track record of filming musicians, including Wilco, Pearl Jam, The Decemberists and Death Cab for Cutie. Their ongoing series, Burn to Shine, is centered around the theme of musicians playing in soon-to-be-demolished houses.

I arrived in town on Tuesday and on Wednesday, I met Trixie’s two director-producers, Christoph Green and Brendan Canty. Wilco had set up shop and were rehearsing in the Hunter Theater. Christoph handed me his Panasonic AS 100 camera to shoot b-roll footage of the setting up of the festival. I parked myself in the walkway to Michael Oatman’s All Utopias Fell Airstream and shot the Art Fabrication crew attaching the “Wilco” letters to the old coal chute, with the help of crane drivers from Gagney Mechanical Corp.

When returned the camera in the afternoon, Christoph introduced me to Jeff Tweedy – amicable and teddy-bearish in his denim jacket and Cardinals cap - as he talked to them about the shoot. They were filming the band’s rehearsals for the all-requests show with a two-camera setup. Tweedy would ask an audio technician with a MacBook plugged into the console to play snippets from the songs they’d be covering. They studiously listened to the first few bars of the Beatles “And Your Bird Can Sing,” drinking in the subtleties of McCartney and Harrison’s dual guitar riff. Tweedy closed his eyes and kept time with a waving finger, mentally sketching out the rhythm. He’d then ask to cut the music, and Wilco would re-create the song, trying to stay as faithful to the original track as possible.

Shortly thereafter, our film crew began arriving. I helped production manager, Rachel Coursey Holmes, to get everyone together, and showed them around the museum campus. Many of the people who would work as “shooters” (camera operators) are accomplished filmmakers in their own right. Michael Galinsky is co-director of the documentaries Horns and Halos and Battle of Brooklyn. Ben Harbert made a film about the music performed by inmates in Louisiana prisons. Jem Cohen directed Museum Hours, a romantic dramedey set at Vienna’s Kunsthistorisches Art Museum, which is out now in limited theatrical release. And yet, for these few days, this Ocean’s Eleven-­like assortment of filmmaking talent would all muck in at MASS MoCA,capturing the full scope of the third Solid Sound Festival on film.

Production assistants are also known as “runners,” for good reason. It’s our job to run around and get things for the crew so they can focus on their work. Jeff and Stone, our two other PA’s, and I, made trips to the Big Y supermarket and Wild Oats health food store, to stock the craft services table in the makeshift production office in Building 6.

I came close to being mugged for my large Village Pizza pie as I carried it around the stage, passing out slices to our crew minutes before Wilco took the stage. Other times, we would stand at the ready, keeping an eye on the shooters, in case they needed a fresh camera battery or memory card. I was often so busy darting this way and that, that I didn’t have time to catch a couple of my favorite acts, like Mark Mulcahy, Sean Rowe, or the comedians. Fortunately, I was stationed near the front-of-house sound tent for some of the best performances in Joe’s Field.

Wilco’s all-requests show featured classic rock station staples like “The Boys Are Back in Town,” “Surrender,” and “Cinnamon Girl” – tunes that paid homage to North Adams’ working-class cultural roots – mixed in with more esoteric selections from Daft Punk and Television. Neko Case amazed me with her performance on Saturday, and Brazilian psychedelic-rock veterans OsMutantes blew me away with their all-too-short set on Sunday.

I quickly fell into the role of TrixieFilm’s official guide to the labyrinthine geography of MoCA’s 24-acre campus. As anyone setting foot in the museum for the first time can attest, it's hard enough finding your way around when it’s empty, let alone when it’s choked with 8,000 rock fans.

I thought of myself as Sean Connery’s character in The Rock – the guy with the mental map of Alcatraz who helps Nicolas Cage and co. on the action-packed mission of rescuing hostages from Ed Harris’s villainous general.

From Trixie’s headquarters – directly above Wilco’s off-limits VIP area – I would direct the shooters through the creaky corridors and winding basements to the site of the next performance or bit of festival flavor. I showed them how to get through the maintenance shop for the quickest way to Courtyard C. I led them through rickety overhead walkways into the cobweb and broken glass-filled Building 17 for good camera vantage points. Most useful of all was the “secret” passageway I showed them through the subterranean boiler rooms, where one can travel the entire distance of the museum without setting foot in the courtyards or galleries.

“Quick!” Christoph exclaimed on Saturday. “Jeff Tweedy’s giving a radio interview in The Loft! Jack, go with Jim and show him the quickest way there!” I grabbed a boom mic and ran along with Jim Saah, through the Xu Bing and Sol LeWitt galleries, to an upstairs area that Wilco had redesigned as an appropriation of their Chicago-based recording studio. Their guitars, and the colorful Nudie suits they’d had designed for their 2008 tour, lined the wall, and patrons could listen to album outtakes on sets of headphones. Most charming of all to me was the addition of moth-eaten Persian rugs covered in bits of painter’s tape, to mark the placement of amps and mic stands.

I held up the boom and Jim rolled the shoulder-mounted camera as Tweedy explained the idea behind the Loft installation – an attempt to give the public a behind-the-scenes glimpse of Wilco’s creative process. WFUV’s Carmel Holt remarked that it reminded her of the moment in The Wizard of Oz where they pull back the curtain and meet the real wizard. Tweedy self-deprecatingly quipped that he was sure the result was just as disappointing as the little old man behind the curtain. We followed him as he walked and talked. He paused in the middle of his sentence, smiling as he gazed out the window at Yo La Tengo playing outside.No doubt it was one of the rare moments when he got to enjoy his own festival as a spectator.

After Medeski, Martin and Wood closed the show on Sunday night, and we gathered up all of our equipment, there were hugs, handshakes, group photos, promises to stay in touch, and a great feeling of accomplishment.

The next day, on the train back to New York,three different strangers spotted my Wilco t-shirt, and chatted to me about the festival. The return trip was, like the entire weekend, a catalyst for new connections and making friends. An incredible and most enjoyable time indeed.