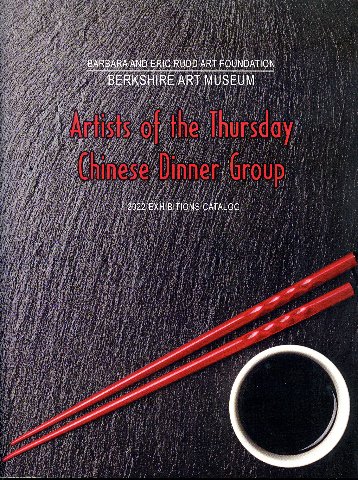 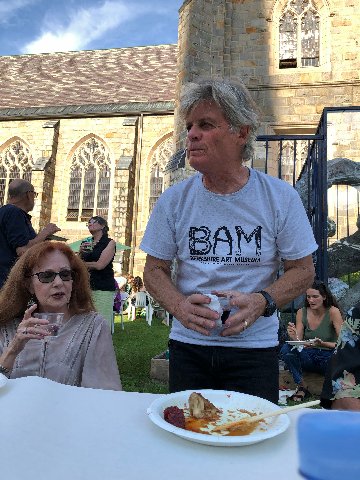 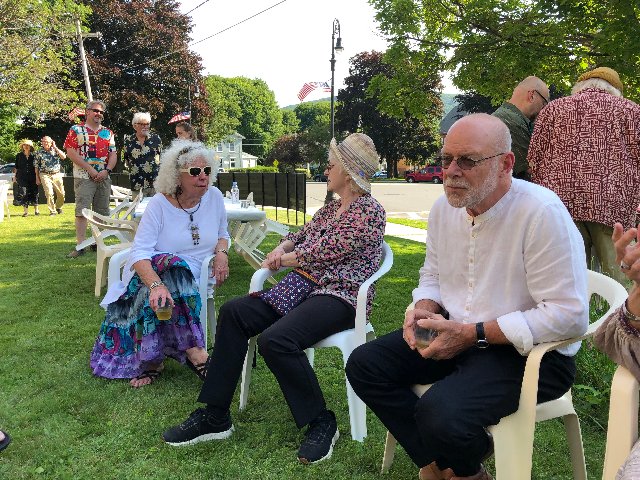 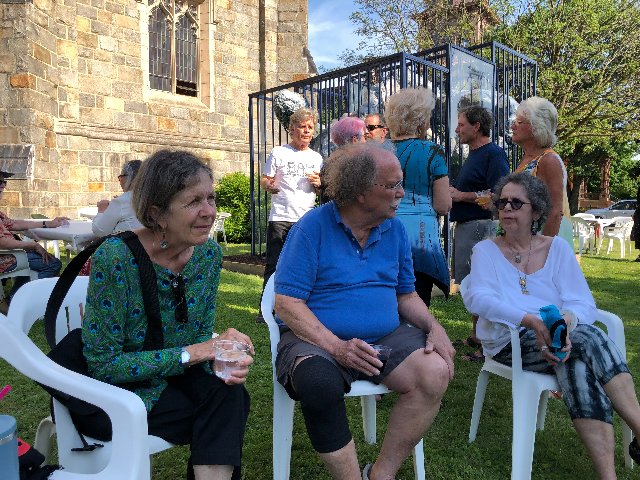 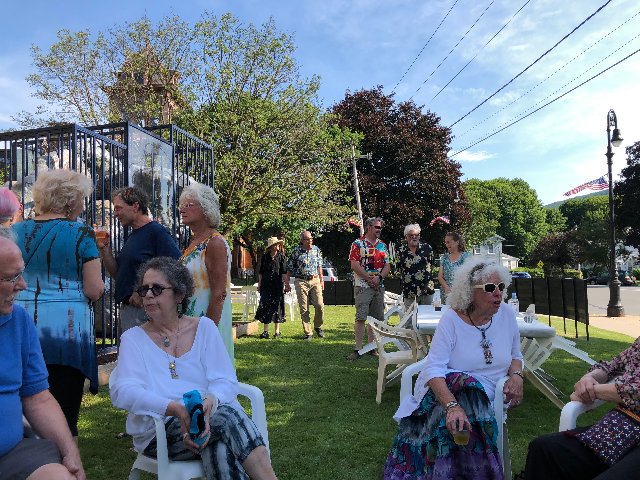 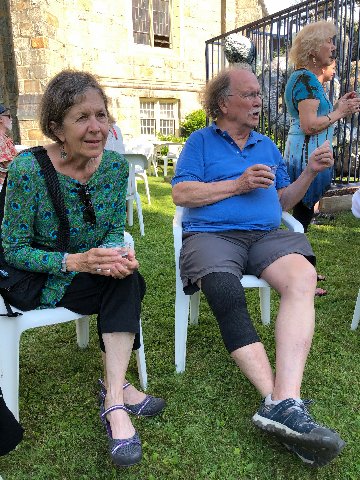 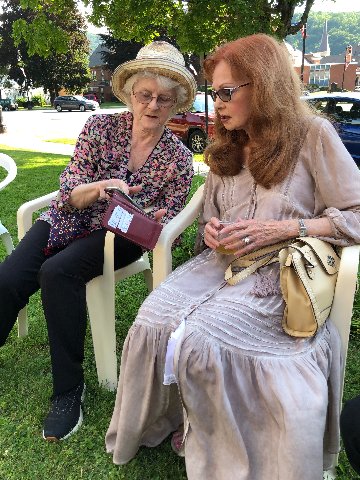 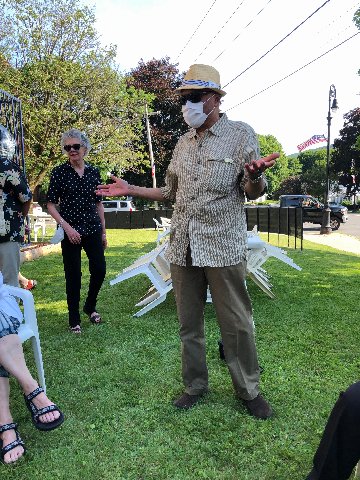 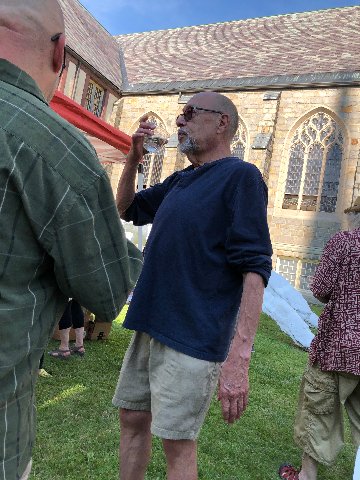 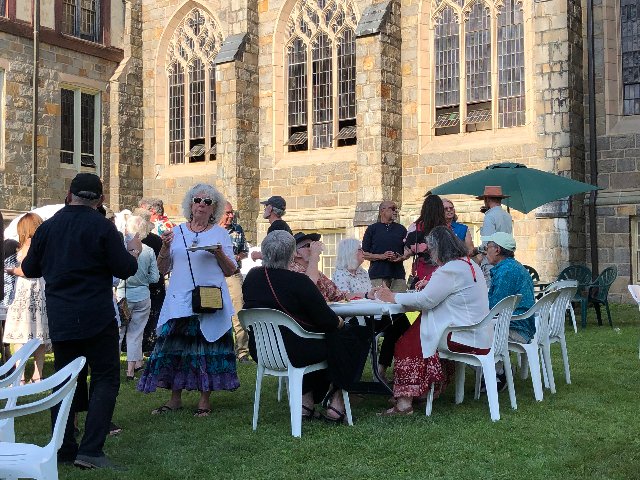 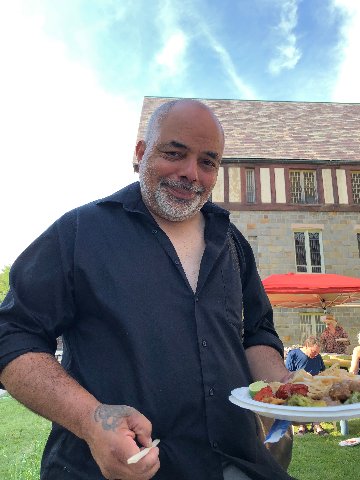 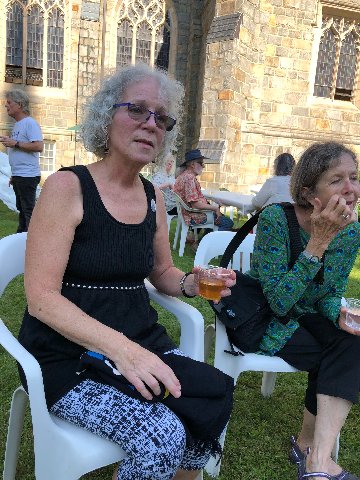 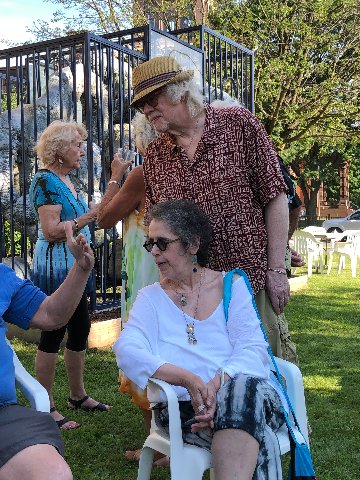 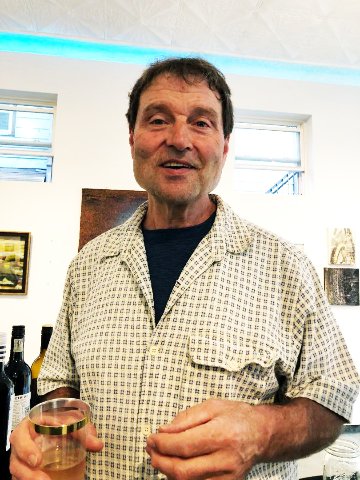 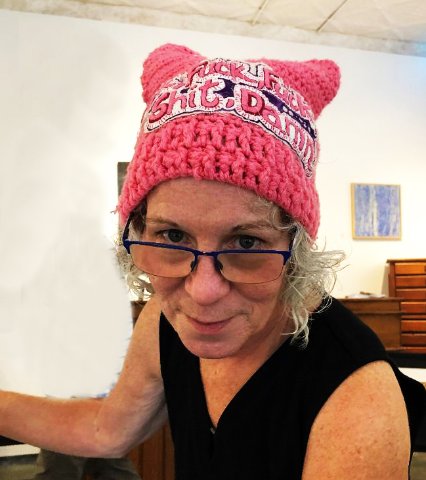 Francie Reilly created this cap to wear to demonstrations.

The current exhibition at Berkshire Art Museum, in a converted church in downtown North Adams, was planned for 2020. Last night, as a highlight of the season launching Fourth of July weekend, it opened with a festive picnic on what proved to be a picture perfect summer evening. The more fortunate guests found seats in the shade. Or even seats for that matter as the event was oversubscribed.

There was a bit of musical chairs as plastic chairs were grabbed, swapped and commandeered. Some resorted to perching on the edge of host and artist/entrepreneur, Eric Rudd’s sprawling, whimsical, surreal sculptures.

The initial intent of the artist was to create a permanent exhibition of his work. It is one of several such sites in North Adams. In short walking distance is another Museum Annex and its Chapel for Humanity. A third space The Dark Ride was formerly in Rudd’s vast Beaver Mill.

For just $15 each we feasted on a Chinese buffet prepared by Meng’s of North Adams. Hosted by Joy a group of artists met there weekly to dine and share anecdotes, projects and adventures. It was a fixed matrix for the every growing and evolving arts community of the Northern Berkshires. Through Covid Meng's now focuses on takeout. But Barbara and Eric have hosted occasional artist dinners.

Many of us settled in the shadow of Mass MoCA the largest contemporary art complex in North America. The unfulfilled aspiration was that some of that largesse would filter down to a working community of artists. By setting its sites on the global art world MoCA has shown token interest in local artists.

Which is a bit of a misnomer, as many who have settled here bring with them lifetimes of professional accomplishments as exhibitors and educators.

There was the potential of support from the Pittsfield based Berkshire Museum. That long established, multi purpose institution self destructed through the widely condemned sell-off of major works from its collection several years ago. In so doing it raised some $50 million but earned the scorn of the art world as a pariah. It is pandering to artists with an annual juried show but I will not cross the threshold of the museum.

For all his quirks and eccentricities Eric Rudd has done more for artists in the Berkshires than the pitiful Berkshire Museum or grand but elitist MoCA. Say it ain’t so Joe.

The current installation in the tower galleries of the Berkshire Art Museum is diverse, lively, thought provoking, absurdly uneven, judiciously and even brilliantly installed.

It would be misleading to say that it has been curated by Rudd. The ground rules were simple. If you have attended any of his Chinese dinners over the years you were invited to join the event. It was a matter of showing up with work suitable for installation.

An exception was made for a magic carpet by the diverse and confounding Henry Klein. It must have been a challenge to install his wavy rug. In the past two exhibitions Klein was big time into aspects of waves. Surfs up.

In the tradition of Salons des Refusés, or non-juried exhibitions, the result is remarkably cohesive. This is somewhat different from the equivalent of non equity, amateur, or community theatre.

It speaks well to the community that Rudd has showcased work of such integrity, interest and overall excellence.

Being familiar with most of the artists it was a matter of seeing the latest work. A number of the artists have been seen at the wonderful Real Eyes Gallery in Adams. Three of the artists from the show that just closed - Diane Sawyer, Sarah Sutro and Betty Vera - are on view here. A commonality is that they reside in the Eclipse Mill which Rudd developed.

Bill Riley, formerly a scene painter for the Metropolitan Opera, was director of Real Eyes. His work is on view in the Rudd show. Recently, Bill announced the closing of the gallery and sale of the Adams building that housed his family’s furniture business. He and his wife Francie have been a driving source for the creative community. It is hoped that the Berkshire Artist Museum will fill some of that void.

For sure I can identify with James Allen’s just under life size frieze of cutouts Old and Young Men Walking. I belong to the former and dearly miss the latter category. Another representational artist, Bill Oberst, is presented by a strikingly detailed portrait of a middle aged woman.

Galen Cheney continues a prolific and ever evolving commitment to collaged abstraction. Her woven piece has an engaging jingle-jangle of colorful textures and elements.

For several years I have followed the plein air paintings of Alvin Ouellet. During the warm weather months he is encountered making paintings of local landmarks. But I did not recognize the latest work. I had to read the wall label for confirmation. Literally, he has gone into the woods with dark, textured studies of damaged trees. They are enthralling views of spooky nature. By Constable’s measure they are unpretty which is a part of their mystique.

The poet, Stephen Rifkin, has us standing at attention to read a grid of his work. It’s an interesting idea but no different from reading it sitting down.

On Facebook, we regularly enjoy updates of Ann Scott’s walks through the woods with her dog Smoky. She posts the latest landscapes in this case frozen waterfalls. It was fun to see them up close and personal.

During a studio visit we got previews of works in progress by Linda and Opie O’Brien. She was branching out with an expressionist figure study that I relate to a phase of Dubuffet. It’s absorbing and disorienting. Opie has created two, collaged triptychs in Gothic forms that evoke the detritus of Cimabue fast-forwarded through centuries. The fun is in the diverse collaged details.

My wife, Astrid Hiemer, collects baskets. With photographs and text she had created an evocation of what they mean to her. The elements adhere neatly as a single piece.

The potter Phil Sellers was a neighbor and friend. He and Gail produced and sold a line of baskets as River Hill Pottery. They were community activists with a number of public art projects. The Rudd show includes their totemic pieces. There is a room dedicated to his work and memory.

The exhibition is accompanied by a catalogue. It includes an essay by Rudd about the origin and legacy of the Chinese group. The artists are all given a page with image and text.

Recently the museum was awarded a $100,000 Massachusetts Matching Facilities Grant. Currently there are $50,000 in pledges.