Taking a Bite Out of Corporate America 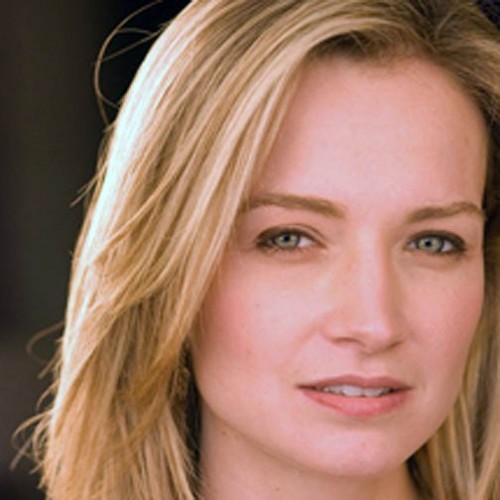 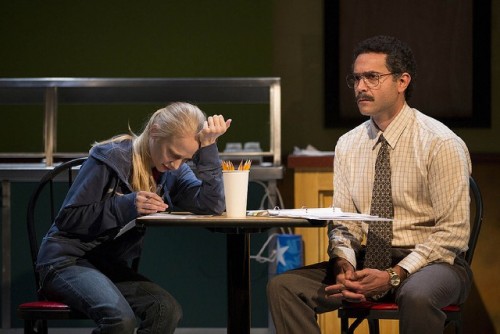 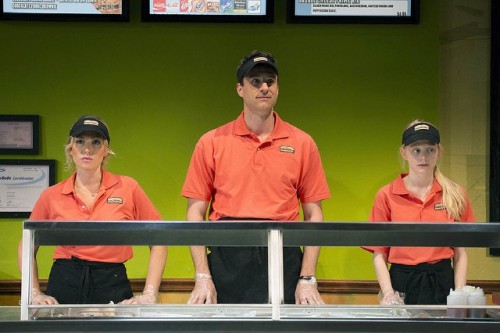 The sandwich artists ready for customers. 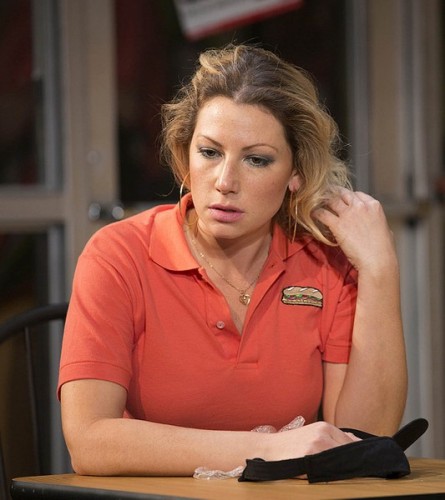 Jamie (Ari Graynor) is a single mom and mousse thief. 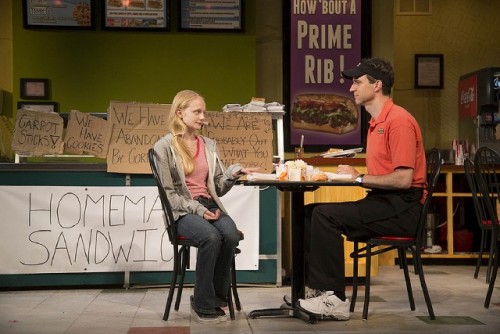 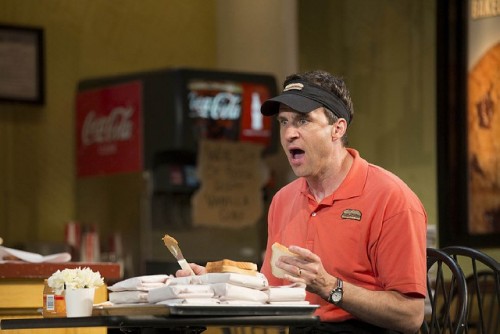 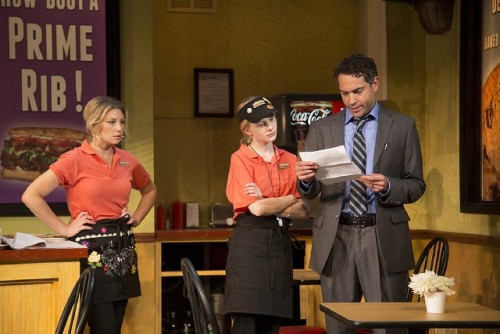 The Kingdom of Heaven is like a mustard seed.

Make that a Southwest chicken sandwich or hero on chipotle roll with mayo, lettuce, salsa, tomato, pickles and hots.

Made in 20 second or less by a team of sandwich artists comprising a baser Shari (Erin Wilhelm), finisher, Ted (James Waterson), and wrapper Jamie (Ari Graynor).

This hilarious one act play by Bess Wohl, her second for the Williamstown Theatre Festival, is riotously entertaining but, pun intended, leaves us with food for thought.

In the context of a sandwich shop franchise “gone rogue” Wohl, in a tradition of comedy that dates to Aristophanes, deftly conflates complex philosophical concepts, with side splitting physical comedy and zinging one liners.

Reading from the corporate manual for a national chain Ted (Omar Metwally), who has purchased a franchise just three miles from an identical one, instructs his newly hired team on how precisely to assemble portioned ingredients into designer sandwiches.

For minimum wage of $8.60 an hour the job sucks. But in these hard economic times they are willing to labor eight hours a day in the multi billion dollar fast food industry.

Ted who talks back to the boss has an MBA and worked for Bank of America for 20 years. He has been out of work since it ended in a he said she said termination. As a married man with kids he fights the urge to do the nasty with gum popping Jamie. After hours they shag on the floor. But, apparently, it’s no fun for her.

Jamie is a single mom in a custody battle trying to raise two kids. She got sacked as a beautician for stealing mousse. Which, in a crack, she describes as moose. Imaging trying to apply that to your hair.

Sheri, a wee wisp of an asexual blonde teen, is a high school graduate with no talent or future to speak of. She works two jobs. The other in a Mexican themed Taco shop also in the mall. It’s just enough to help pay family medical bills.

We are utterly charmed by the vulnerable Sheri who reveals under pressure amazingly inventive survival skills. She is the absolutely plainest of Janes.

Having mastered the art of assembling and wrapping sandwiches in twenty seconds flat the grand opening goes well although a bit light on traffic due to the shop’s terrible location.

We learn that the corporation, as researched by Wohl, can take up to two years to be developed and placed. The owner of the franchise pays some $450,000 and must purchase all product from distributors at above market rate. The corporation pockets the skim.

At the end of the work day Bob does not return. Nobody knows the combination of the office safe in which to deposit the day’s take. Consulting the instruction manual on a cell phone they call management. The phone, which they have been instructed to pick up on the first ring, is the house phone.

Desperate to keep their jobs they decide to continue running the shop. Until supplies run out.

Bob eventually returns. Briefly. In his office having a loud conversation in Arabic. Ted assumes he is a terrorist and wants to call the Feds. Sheri reveals that Bob told her that he is Egyptian.

The sandwich shop now completely out of supplies devolves into the hell of Sartre’s No Exit or Beckett’s bleak landscape in Waiting for Godot.

Yes, Wohl’s play does evoke those comparisons to epic existential/ absurdist works, but this is a bleeping sandwich shop for cripes sake.

This is much more of a situation comedy than heavy duty theatre.

It’s not a staging of Zen and the Art of Motorcycle Maintenance.

More like how I found God making friggin' sandwiches.

Ted talks about walking with God on his side or more likely covering his back.

Making sandwiches as a religious experience.

It gets outrageous as the three conspire to buy their own ingredients and “go rogue” making their own fast food.

They make constant attempts to reach corporate headquarters for help but keep getting put on hold or talking with underlings.

Between shifts Sheri arrives early for a bit of shut eye.

In a dream sequence she dances with Metwally dressed as a smooth talking sandwich.

It all spins out of control with a total gonzo conclusion which we won’t reveal.

Yes we left the theatre with just heaps to think about from the horrors of the fast food industry to the evils of corporate America. This wonderful new play deserves to be produced again and again and again.

I could go on and on waxing philosophical and all that.

The sets and costumes, makeup, actors and stuff were all terrific.

But excuse me while I make myself a sandwich.

In under 20 seconds starting now.