The Big D in South Florida 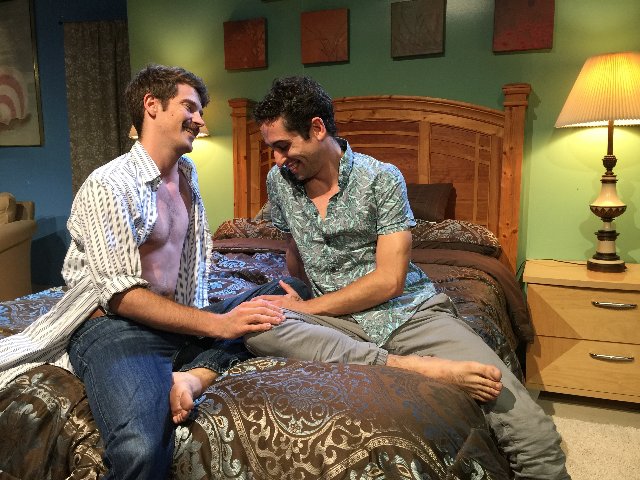 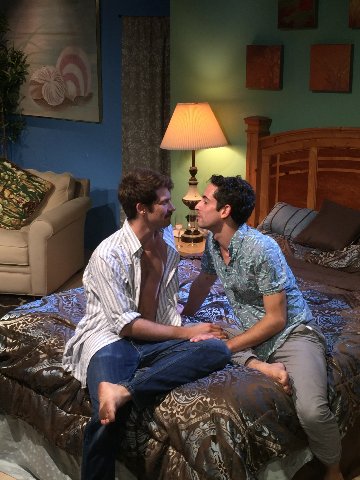 For all the raunchy scenes in Michael Mizerany’s new play The Big D, the message at the weepy comedy-drama’s heart is serious and sincere.

Sure, the characters engage in hard-core, unabashed horseplay and sex. Indeed, there’s a primitive, intense physicality. But this much is certain: The couple in Mizerany’s touching play with pathos and humor literally love each other to death.

True devotion has tremendous endurance power, as we witness from Chuck. He’s one of two characters in The Big D, which is having its world premiere through July 15 at the new, intimate Foundry stage space at the Abyss Theater in Wilton Manors, near Ft. Lauderdale.

The strong-at-times mounting of this split-personality play is a Ronnie Larsen Presents staging. Theatergoers have seen this actor, director, producer and playwright’s work throughout the U.S. and other parts of the world. Now, he’s increasingly showcasing his work in south Florida, particularly at the Foundry.

With much of Wilton Manor’s population identifying as gay, lesbian, bisexual or transgender, the area seems appropriate for The Big D’s world premiere. It concerns two young gay men about to get married, but facing a harsh reality. The sole setting is a modern-day southern California apartment. It’s designed realistically, compactly and cozily by Melqui Dominguez Cadena.

Within this environment, the men, at times fully naked, act like over-caffeinated frat boys. They scamper across the apartment, somersault on the bed, stand, walk and even crawl atop it. They also perform risqué sexual maneuvers and use vivid sexual terms.

However, the “D” stands for “Denial.”

To be sure, there’s no denying the bond Todd Barrett and Chuck Cavery share. They’ve been dating for six months and have grown familiar with each other. They talk over each other and seem to sense what the other is feeling or about to say.

Larsen, the director (with assistance from Jake Krickhan) deserve credit for instilling this sense of familiarity and devotion within the actors.

That sense of commitment from Chuck remains, even when Todd learns his time is short; his brain tumor has returned and he’s practically terminal.

As is the case with any play, the characters face choices. Here, Chuck can remain with Todd until the end or walk away. Meanwhile, Todd can fight for more time on this earth or forgo treatment and make the most of the month he has left -- essentially denying his near-terminal condition.

However, Mizerany doesn’t make the choices seem simple. Rather, the writer uses Todd’s sickness to explore nuances and complexities of language, decisions and relationships.

Todd: There’s nothing to give up! That’s not what I’m saying.

Todd: What choice? Like I have a god damn choice?

Chuck: Taking your meds would be a great choice!

Todd: My choices! How about your choices?

Chuck: What’s that supposed to mean?

Todd: It means we haven’t f—ked in weeks. Is my tumor a turn off?

Chuck: Shut-up! If you ask me again I’m going to knock you down, I swear to God I’ll do it.

Todd: Do it! At least you’ll be touching me!

Speaking of contact, Todd seems to urgently need it. This play is partly about the need for emotional and physical support, especially in hard times.

With that in mind, it’s no accident that Mizerany employs nautical terms as a metaphor for support. This metaphor, while overused, is familiar to most of us.

If you didn’t know that Todd has a brain tumor, The Big D sounds like a play written during the early days of AIDS, when gay men were faced with losing their lovers and friends to that dreaded disease.

In reality, Mizerany has written his newest play during a time when gay marriage is the norm. The practice is now (mostly) accepted. Furthermore, playwrights penning works about same-sex couples treat them like any other loving pair; they’re living life, pursuing dreams and dealing with setbacks.

Todd and Chuck seem like any other loving couple in a crisis and in need of comfort.

For example, in the script, Mizerany notes that Todd is an English teacher, while Chuck is a lawyer. Yet, within the text, the writer never specifies their vocation. Doing so would flesh the characters out and help explain some things they say.

The play also contains at least one inconsistency. For instance, during the funeral for Todd’s mother, the stage directions read that “it is raining.”

But a few lines later, Chuck says that it was “really nice weather.”

Moreover, the playwright describes Todd as “low-key and even keeled. He is pragmatic and intelligent.”

Yet, judging from Gabriel Andrade’s performance, you’d never know it. His Todd is, at least in the beginning, a stereotypically young, gleeful and playful sex-starved young man. As played by Andrade, sporting tattoos, the character does often use humor as a defense mechanism, which is in keeping with the playwright’s description.

And when it comes time for Todd to act frightened, Andrade is at his best. He turns Todd into a vulnerable, choked- up man, still smiling, but clearly to mask his grave feelings. The smile is obviously uncomfortable and pain-filled. He is, figuratively, a naked, exposed man, all his fears fully revealed.

Surely now, Todd is no longer the playful, primitive man on all fours with a primal need for intense sex. Now, a reassuring hug will do.

Opposite Andrade, Tambellini shines as Chuck.

The actor’s wide, intense eyes are particularly expressive, whether he’s aroused, angry, wary or conveying other big emotions. Tambellini’s Chuck might be impulsive and energetic, ready to pounce at a provocation or an invitation to climb into bed for some steamy sexy. However, the performer also conveys, with impressive spontaneity, heartfelt concern, devotion and comfort.

The play runs an hour-and-a-half without an intermission – this despite the script’s more than 100 pages. Larsen’s fast pacing perhaps can suggest the speed at which Todd’s death is approaching – and life’s preciousness and short duration. Indeed, the play also touches on adult offspring forgiving their parents after a period of anger. Life’s too short to remain mad, the playwright seems to be saying.

Larsen achieves a nice balance between highly physical, comic moments and dramatic, tender ones. While the pacing tends to be fast, it’s varied so we can really take in the touching, heartfelt scenes.

Although this is a straight play, songs serve as transitions and to enhance the mood. A romantic “Can’t Help Falling in Love” and Etta James’ “At Last” create a romantic ambiance, enhanced by soft lighting.

Curiously, though, when the characters go skydiving as part of Todd’s “Bucket List,” the lighting is also soft. This is a happy moment for Todd, one in which he can temporarily forget about his sickness. Bright lighting would reinforce this.

The play itself, and this production of it, could benefit from some changes. But the Big D’s strengths and potential make us hope other theater companies will take notice – and that we’ll re-visit this play at some point, at least once, in the future.

The Big D runs through July 15 at the Foundry at the Abyss Theater, 2308 N. Dixie Highway in Wilton Manors. Tickets range from $35 to $50. You can buy them at RonnieLarsen.com. Show times are 8:30 p.m. Thursday-Saturday and 7 p.m. Sunday.