Grapes of Wrath in Chicago 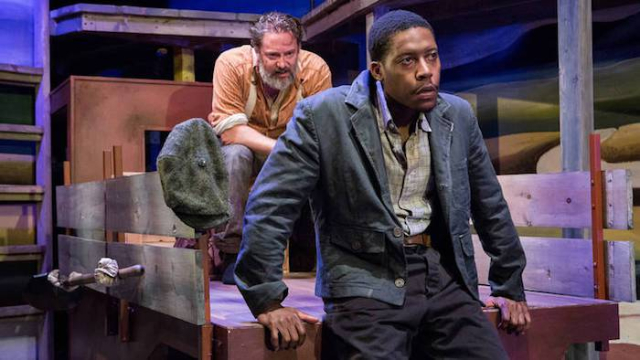 Jerre Dye as Casy and Namir Smallwood as Tom. Photo by Claire Demos.

The Gift Theatre’s eloquent new production of The Grapes of Wrath is a story of Dust Bowl migrants during the Great Depression of the 1930s, but it bears witness to many of the personal tragedies of today’s ongoing Great Recession.

Written by Frank Galati, the adaptation of John Steinbeck’s 1939 novel was first produced by Steppenwolf Theatre in 1988 on an expansive stage with a river of real water. Erica Weiss’ Gift production, while performed in a suffocatingly tiny space, is equally powerful in its range of emotions and ideas. Loss of home, desperation to find work and feed families make The Grapes of Wrath ring with resonance.

The Joad family, Dust Bowl farmers in Oklahoma, are driven from their home by drought and economic changes—and mostly by the banks that destroy their homes because they no longer want tenant farmers. The Joads and their neighbors prepare to drive to California where fliers promise hundreds of jobs picking fruit. The family sets out on the long trip in their newly purchased but decrepit Hudson Super Six truck, loaded down with possessions and the large Joad family. Along the way, they meet other migrants traveling to or from California and hear stories that dim their enthusiasm for what they will find when they arrive. California, they learn, may not be the promised land, but a place where employers pay extremely low wages, set one group of workers against another, and where labor organizers are jailed.

Tom Joad (Namir Smallwood), just released from prison for a murder he committed in self-defense, arrives in time to join his family on the long trip. His parents (strong performances from Paul D’Addario and Kona N. Burks) are overjoyed to see him because they were afraid they might not be reunited once they left home. Tom is on parole and restricted from leaving the state but decides the trip is worth the risk. Other family members are Al (Lane Flores), a wild but mechanically talented young man; Rose of Sharon (Emily Marso), who is pregnant and married to Connie Rivers (Tim Martin); Uncle John (Jay Worthington), blind and unwilling to leave his house. Grampa and Granma Joad (Art Fox and Alexandra Main) are going along, as are three other Joad offspring.

Ex-preacher Jim Casy (Jerre Dye), although reluctant to take up space in the family vehicle, accepts the invitation to travel with the Joads and provide grace and blessings. Casy is no longer a believer, but speaks eloquently when he feels the family’s need for his prayers. With his rich baritone voice, Dye’s performance is the strongest among an excellent case.

A key Steinbeck scene is rendered beautifully near the end of the play. Tom, knowing he is about to get in trouble, tells his mother:

Director Erica Weiss masterfully directs a cast of 19 in the claustrophobic Gift Theatre space. Weiss makes an interesting decision in casting the Joads as a multiracial family, which adds even more texture to the story.

A key cast member is the Balladeer (the talented Diego Colón), who provides background music and songs to enhance the Joads’ story. His guitar is sometimes amplified with other musicians on fiddle, mandolin, mouth organ, washboard and washtub bass. Original music with themes of bluegrass, blues, folk and Dust Bowl was created and directed by Colón and Christopher Kriz.

The performance space in the 50-seat theater includes the back end of the truck and a ladder to an upper stage loft above where many scenes take place. Courtney O’Neill’s scenic design paints the backdrop with an expressionistic landscape of land, roads and water with sky and clouds above.

The Gift Theatre production of The Grapes of Wrath continues through Aug. 14 at 4802 N. Milwaukee Ave. in Jefferson Park. (The theater is a block from the Blue Line station.) Performances are Thursday-Sunday. Tickets are $35 and can be bought online. Call 773-283-7071 for more information.