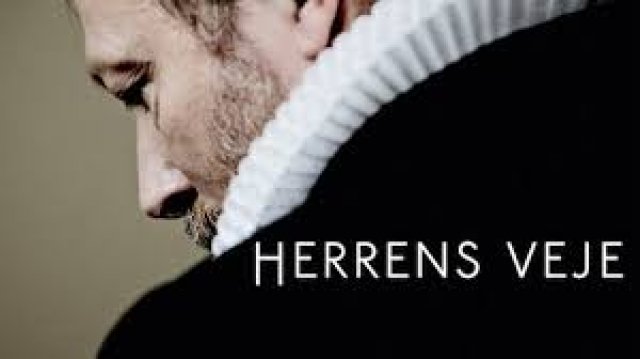 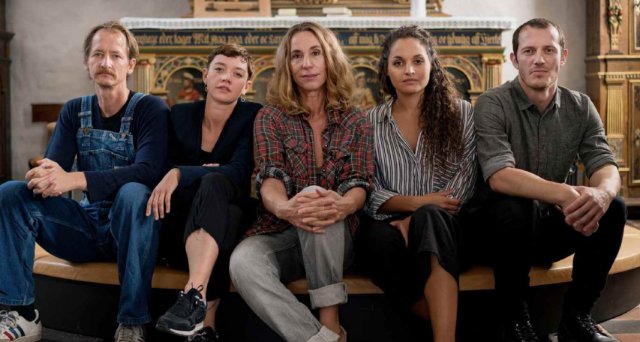 For 250 years the Krogh family has been in the God business. Ancestral  portraits line the stairs of the rectory. Their story is revealed in a masterpiece Herrens vije (Ride the Storm) on Danish television rather than BBC. It may be viewed on Netflix.

Presiding over the family is the tyrannical, charismatic and deeply flawed Johannes. In a riveting, Emmy winning performance, is the handsome, chisel- featured Lars Millelsen.

With fanatical, obsessive misdirection he coveys a spectrum of mixed signals to his family and congregation. One son, August (Morten Hee Andersen) has succumbed to his father’s will and become a vicar.

Clearly gifted as a preacher with an emerging career he enlists for a tour of duty in Afghanistan. To earn the support of soldiers he blesses their vehicles and equipment and is urged to accompany them on patrol. Pinned down he is convinced to shoot a combatant disguised with a burka. It ensues that he has indeed killed a woman and she haunts him as a ghost. That unravels his life and career.

Prescribed meds they neuter his relationship with an elfin wife Fanny Louise Bernth (Emilie Krogh) who is a physician.

Initially, the other son Simon Sears (Kristian Krogh) is a screw-up. He plagiarized his thesis. In disgrace he is ousted by the board of a company he is launching with his best friend. As reconciliation they take a long planned trip to Nepal. There it is revealed that Kristian has been sleeping with his friend’s girlfriend Camila Lau (Amira).

Things fall apart when he tumbles off the trail after too many beers. His backpack has been stolen as well. He wakes in a monastery where, after resistance, he recovers and finds his way. An immersion into Buddhism leads to successful books and a self-help business launched with Amira.

The wife of Johannes, Anna Eleonora Jorgensen (Elisabeth Krogh), played with range, compassion and vulnerability struggles to find her sexual identity. While he has philandered under her nose his defense is that they “had an understanding.” Turnaround is fair play as they take in Liv a young violinist. He finds their subsequent relationship “disgusting.”

There are many other characters in this epic Danish drama with twenty episodes over two seasons. Of particular note is the stunning performance of Svend (Joen Hojerslev) the fragile, vulnerable, unquestioningly loyal assistant to Johannes. Too often he is taken for granted at times with tragic consequences.

This remarkable series functions on many levels. There is a lot about God, from blind faith, to the business and administration of running His church. Through the spiritual quests of the sons we consider Islam and Buddhism.

With each episode, some viewed through binges, we were stunned by the richness of writing and uniform majesty of performances. There are many twists and turns. The one constant is that under every circumstance Johannes will be a self absorbed, egotistical, utter jerk. The stunningly galvanic performance of Millelsen take us through a bumpy, raucous, catapult of emotions. This remarkable actor works without a net. His riveting performance energizes and calibrates the superb supporting cast.

None more so than Jorgensen as a woman of a certain age. Her utterly plastic facial expressions range from tender, uncertainly probing romance, to outrage, a cry for freedom, and delusion to the cusp of madness. Pushed to the brink, she displays moral fiber that ultimately overrides her husband and unites the family.

This totally absorbing drama is must see television. On many levels it is on the short list of greatest works in a lifetime of viewing. Individual episodes are utterly shattering. These flawed characters and epic struggles of faith, however, completely inhabit hearts and minds.