Logo for the magazine. 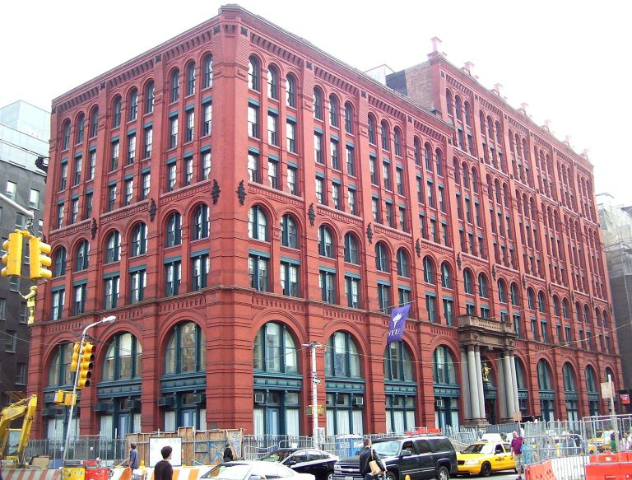 The Puck headquarters in a building that survivies in Manhattan. 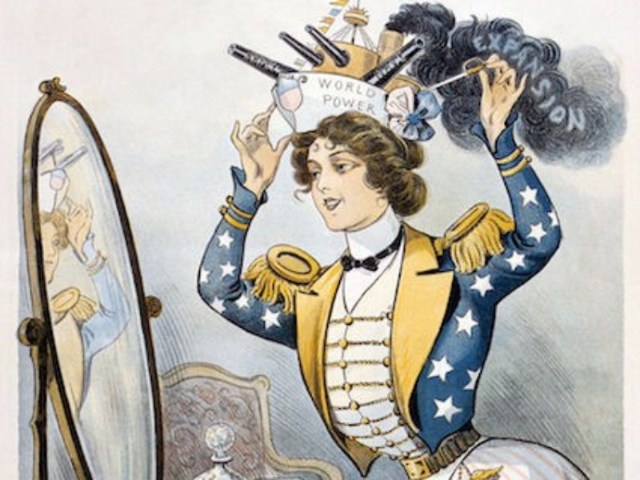 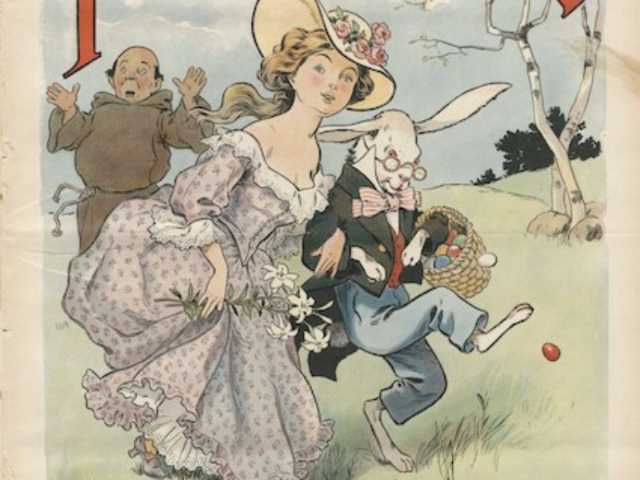 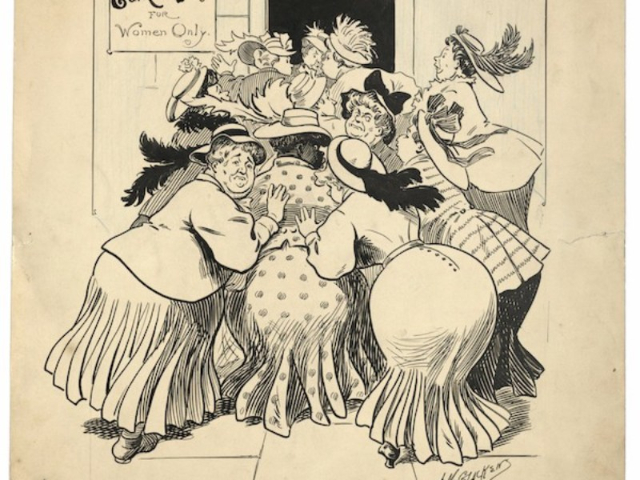 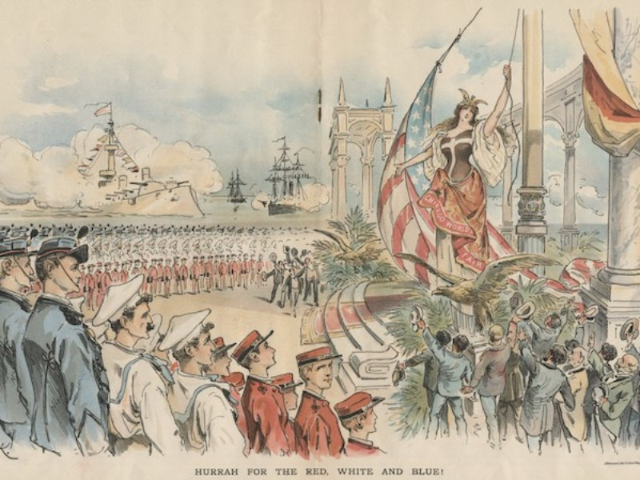 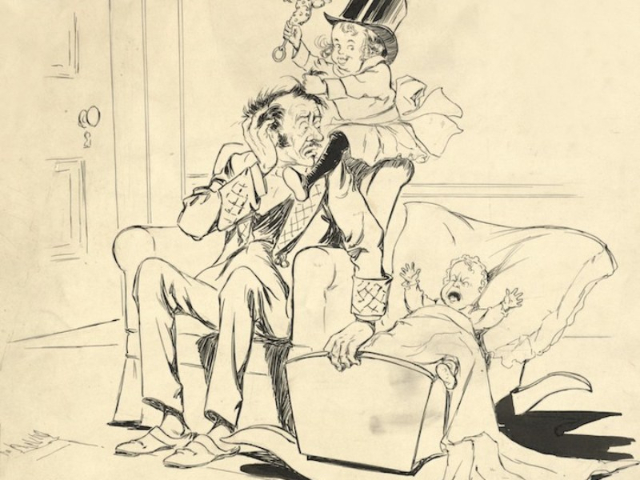 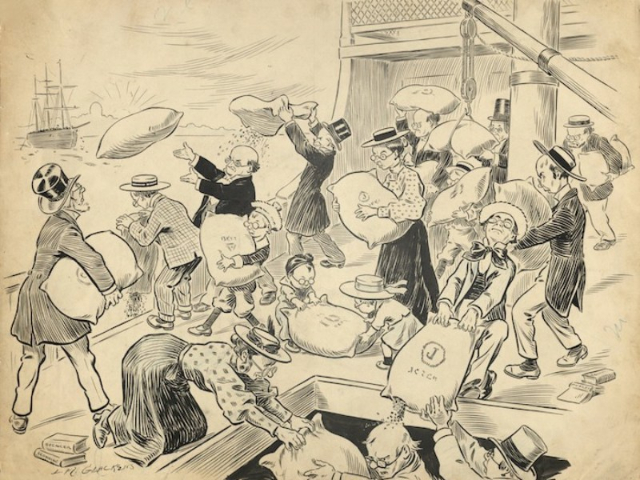 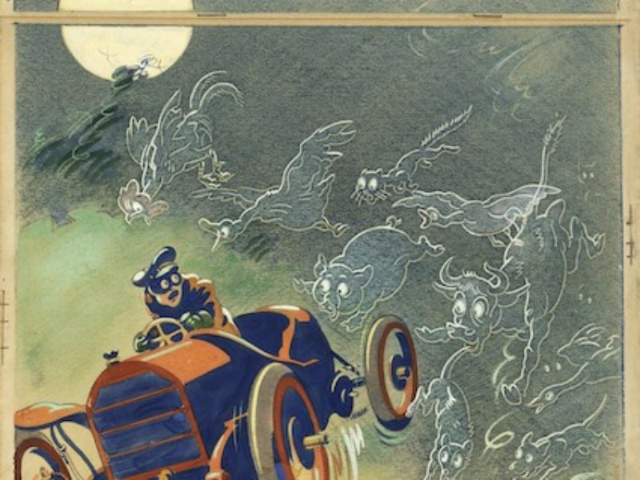 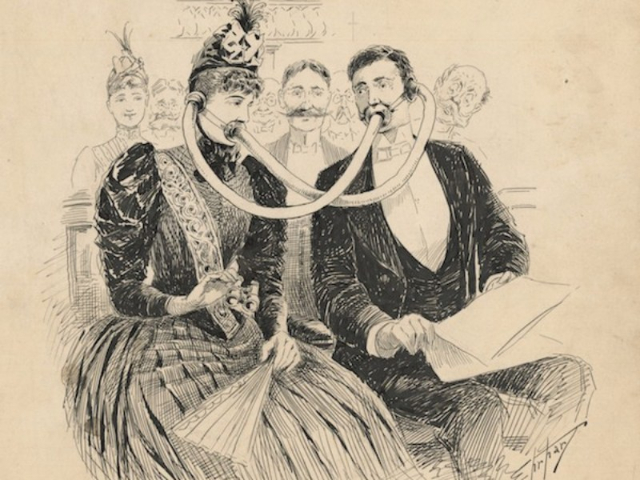 Puck, the 19th century literary-political-humor magazine, was revolutionary in ridiculing everything about Gilded Age society through cartoons created by gifted artists of the period. With a Wink and a Nod: Cartoonists of the Gilded Age is the new exhibit from Puck magazine on view at the Driehaus Museum, a magnificent 19th century mansion just off Michigan Avenue. The exhibit also illustrates how Puck presaged the rise of humor magazines in the 20th century as well as current television political and social satire.

The exhibit is made up of 74 framed original drawings created for the magazine along with copies of 20 vintage magazines, the actual publications where they appeared. The works are organized by themes such as Modern Life, Social Commentary, Love and Marriage, Culture and Society, Cast of Characters (human stereotypes of all types) and Cornball Humor.

Many of the artists were well-known illustrators but Puck also offered opportunities to new artists. Some of the artists whose work is shown in color and black and white versions are Samuel Ehrhart, Louis Dalrymple, Louis Glackens, Franklin Howarth, Frederick Opper and William Rogers.

The magazine’s name is derived from Shakespeare’s mischievous sprite Puck in Midsummer Night’s Dream. Puck’s observation on human folly—“What fools these mortals be!” —is featured on the masthead.

Puck was the first successful humor magazine—well-circulated, long-lived and prosperous. The cartoons also were appreciated for their artistic value at the time of their publishing. Puck began offering past drawings for sale as original artworks in 1901 and many people would remove and frame covers or centerfolds from the printed magazine. Today, you can find copies of Puck and Puck illustrations in sites such as eBay and the New York Times Store.

The magazine was a pioneer in color printing as well. It was the first to use chromolithography: Full color lithographs were used on the front and back covers and in the centerspread of the magazine. The exhibit includes helpful diagrams to show how this early form of color printing was produced, color by color, from stone to page.

Puck was founded as a German-language publication in 1876 and published its first English-language edition the following year. Publisher Joseph Keppler Sr., an Austrian immigrant and cartoonist, founded his publishing business in 1871 in St. Louis and moved it to New York five years later. (Keppler also moved his operations to Chicago briefly to publish special 1983 World’s Columbian Exposition editions.) For the next 40 years, Puck provided a perspective on life in Gilded Age America. (The “gilded age” is usually defined as encompassing the years from just after the Civil War to World War I—in other words, from 1865 to 1918.)

The Puck building in New York still stands at the corner of Houston and Lafayette Streets in the neighborhood now called Nolita (North of Little Italy). The steel-frame building was designed as the world’s largest lithographic pressworks under a single roof, with its own electricity-generating dynamo. Gilded statues of Puck are placed at several points around the building.

In the 19th century, long before today’s political satirists were born, Puck came along to puncture the egos of the smug, the wealthy and the powerful. Puck’s cartoonists are the godfathers to 20th century humor publications such as now-dormant college humor magazines, Mad Magazine, Spy and The Onion, as well as to the humor portrayed on television programs like “Saturday Night Live” and “The Daily Show,” and on stage at Second City, the Upright Citizens Brigade and every improv center in the country.

The Driehaus Museum was built in 1883 as the home of the Samuel M. Nickerson family. Nickerson was founder of the First National Bank of Chicago and also involved in liquor and explosives businesses. The exhibit is arranged around half a dozen galleries—once the private bedrooms of the Nickerson family—on the mansion’s second floor. Not only can you see the original Puck artwork and its printed representations, you can explore the mansion’s exquisite marquetry floors and cabinetry, hand-carved exotic and domestic wood trim, and marble and onyx stone hallways.

The exhibit, With a Wink and a Nod, is organized by the Flagler Museum, Palm Beach, Fla., which owns the Puck collection of drawings. Another collection of original Puck artwork dating from 1879 to 1903 is maintained by the Special Collections Research Center of George Washington University, Washington DC.

With a Wink and a Nod: Cartoonists of the Gilded Age will be on display through January 8, 2017. The Driehaus Museum, 40 E. Erie St., is open 10am to 5pm Tuesday-Sunday. Admission is $20 with discounts for seniors and students. Special one-hour guided tours are available for an extra $5 several times a day. For more information, see the website or call 312-482-8933, x21.