Special Exhibition Has Flowers in Its Hair 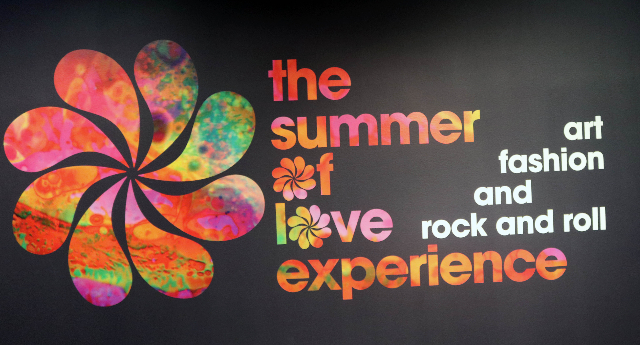 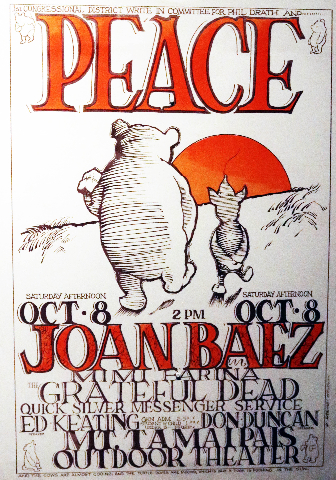 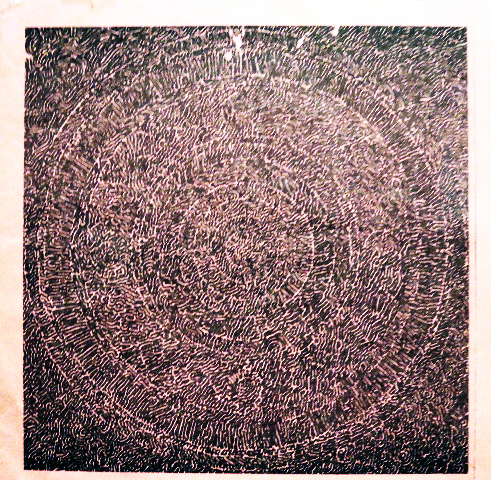 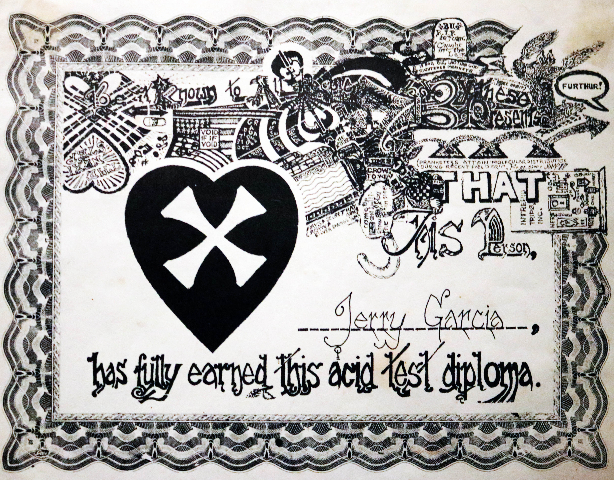 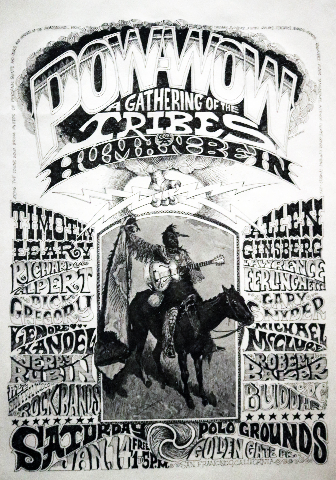 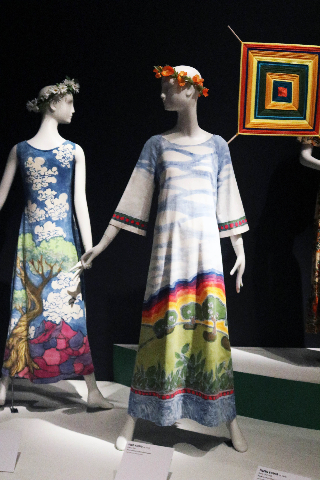 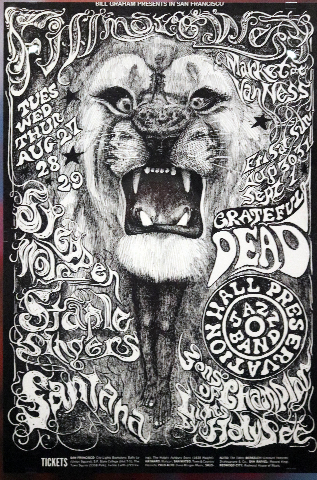 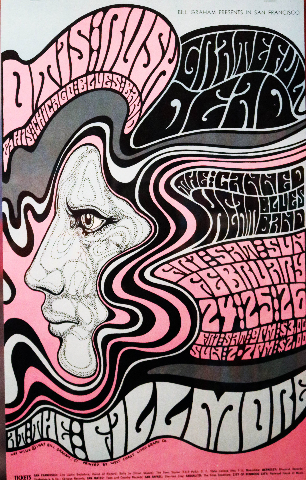 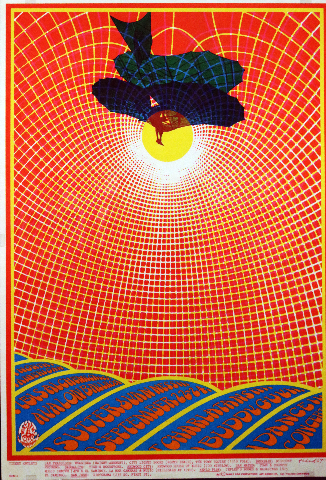 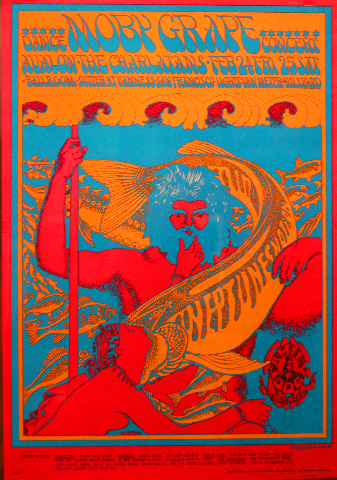 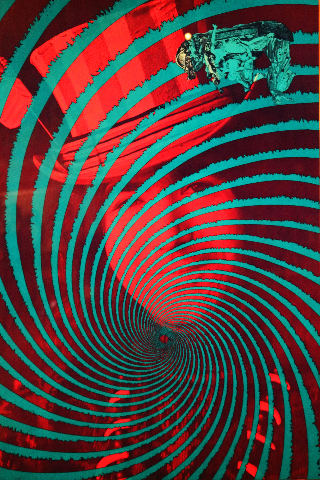 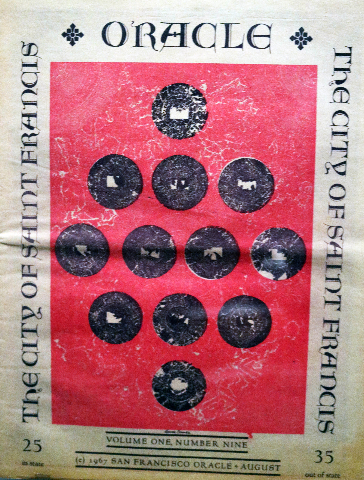 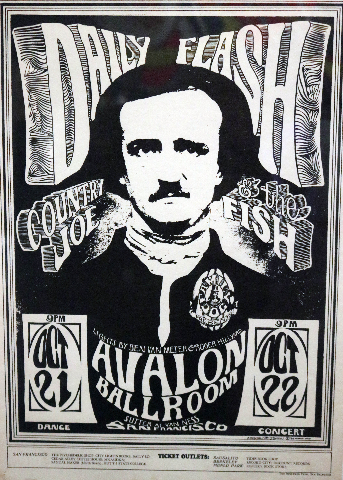 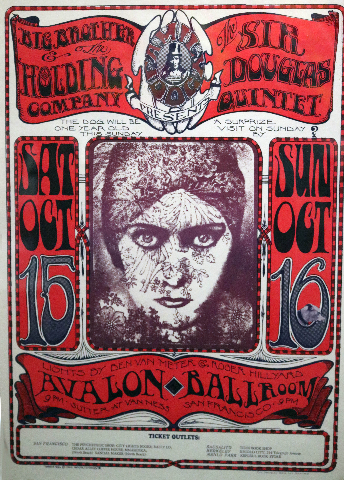 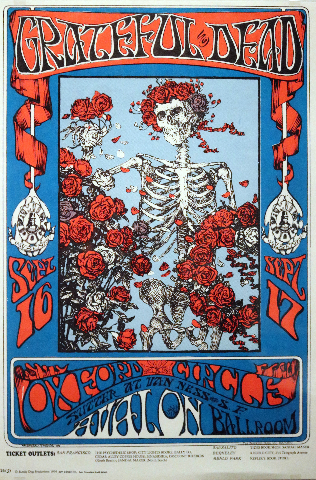 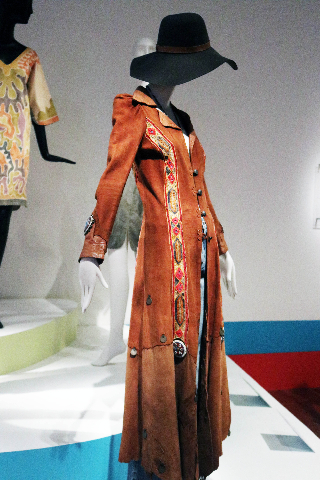 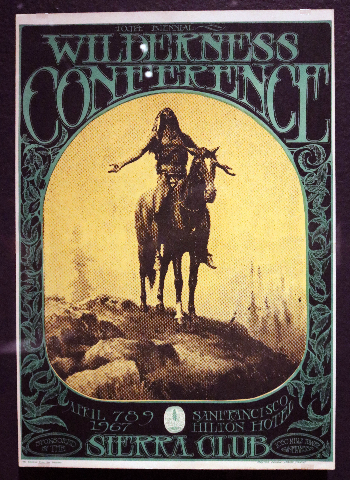 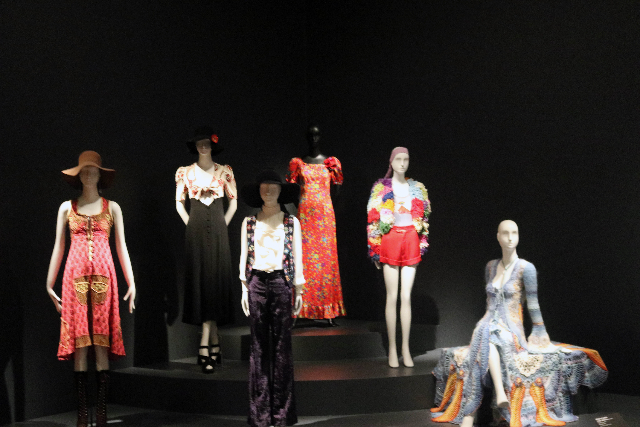 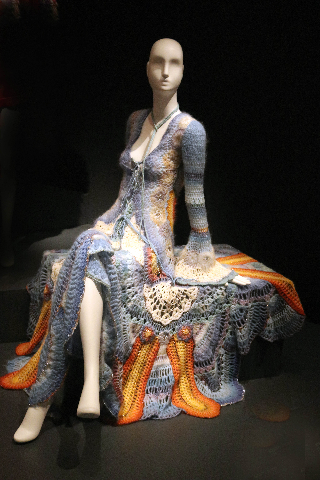 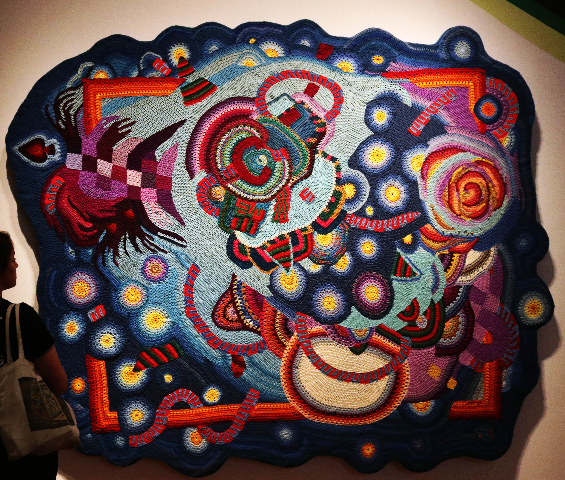 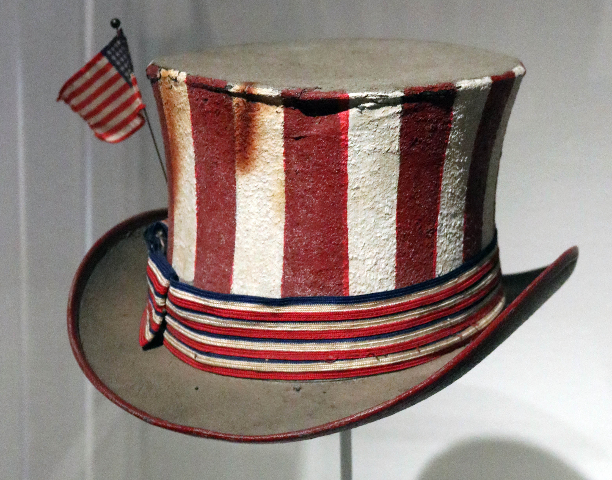 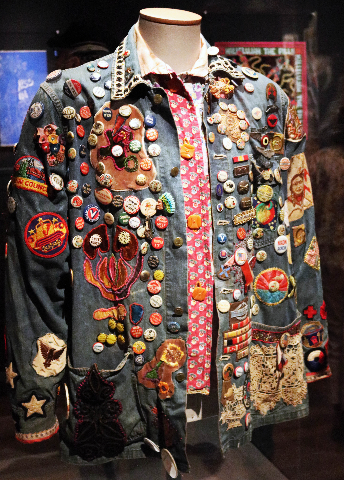 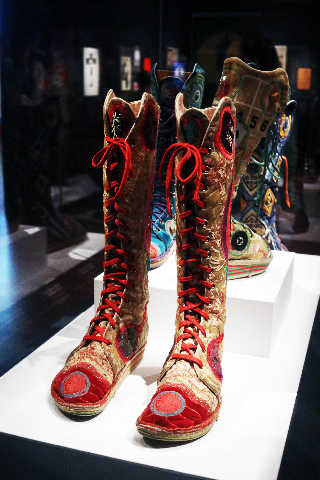 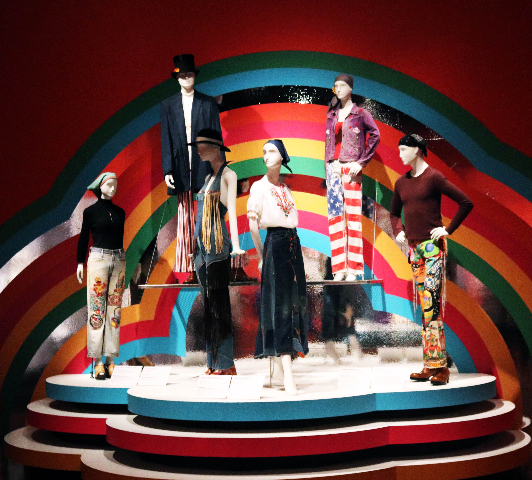 It may have taken fifty years but, just as Scott McKenzie crooned so enticingly, we finally got to San Francisco with flowers in our hair.

Well, truth be told it was more like the girl who went to the party with Pabst Blue Ribbon in her hair and came home with Schlitz in her pants.

At the time as close as I got to the Summer of Love was a storefront pad in the Lower East Side.

But wearing a cool white suit I heard McKenzie, during his fifteen minutes of fame, sing his anthem. He appeared at The Electric Circus, a physchedelic rock club in a former Polish meeting hall in St. Mark's Place. It went through other incarnations as The Dom and Andy Warhol's The Balloon Farm. It's where I first saw The Velvet Underground and my pal Gerard Malanga in leather pants performing his whip dance while Nico sang off key with that "I vant to be alone" accent.

In the heat of that summer, when Con Ed turned off my juice for non payment, it was sweltering. I sat on the stoop and watched the flower children flow in from the burbs.

Spinning in a daze I rescued one whose pedals had been plucked.

There were ugly black marks on her neck, the imprint of finger prints from a pimp who intended to turn her out on the streets. She was hungry and exhausted when I took her for a meal of pierogies at a deli on Tompkins Square Park.

After a meal and a nap, using a pay phone, we called her parents then put her on a bus back home.

Apparently, there were thousands of such stories from Haight Ashberry that summer.

It wasn't as groovy as the myths make it out to be.

But the special exhibition at the De Young Museum which commemorates the events is a trip man.

It is full of psychedelic posters and hip threads. There are tons of vintage photos of be-ins, acid tests, and free concerts. It captures the odd mix of musicians, artists, beat poets and corn fed kids from Iowa high on acid with painted faces.

Looking at the inventive designs there was uncanny aesthetic and technical sophistication. Not only were the designs new and fresh but the heads that created them freely appropriated ideas and images from Beardsley, art deco and art nouveau through reconfigured works by Ensor and jugendstil masters like Peter Behrens' iconic image "The Kiss."

Abandoning traditional fonts they drew them in hand made wavy patterns. Nothing evaded them from the Bauhaus abstractions of Albers to the moire effects of then fashionable op art.

Using mechanical offset lithography they developed cheap but labor intensive color separations for posters advertising concerts at the Fillmore and Avalon ballrooms and for special events. They were skilled at marketing love and promoting an explosion of Bay Area rock bands.

Most of the musicians were smart except possibly Pigpen of the Dead who played so so congas and was a stoner connection to the biker gangs.

When the Dead played Boston I hung out in the green room of the Tea Party. It was winter and as usual the city was dry. They flew in with a gang of weed. Jerry Garcia liked to talk about Django Reinhardt, man. Heavy. The keyboard player lost me when he discussed Stockhausen as an influence on his music.

Most of the hippies, except the hard core dropouts and druggies, were back in school that fall when it got too cold to camp out and crash as crash can.

There was a war going on and all kinds of bad shit going down but none of that seemed to matter.

More often than not we blew the rent money on a lid.

The Summer of Love mostly happened because of one  Augustus Owsley Stanley III (January 19, 1935 – March 12, 2011). A techie with The Grateful Dead, after some research, with a couple of pals they set up a lab to mass produce LSD.

Between 1965 and 1967 he processed some 500 grams of LSD or five million hits. Close to the original Sandoz from a Swiss company it was notable for purity and potency. There were soon numerous imitators.

The media was crawling all over the story trying to find an angle. I was writing for the underground press, The Avatar. Out in Frisco there was The Oracle with its amazing graphics.

CBS News sent Harry Reasoner who filed “There are the hippies. They make you uncomfortable because there is obviously something wrong with the world they never made if it leads them to these grotesqueries. But granting the faults of society, you can say three things about them. They, at their best, are trying for a kind of group sainthood, and saints running in groups are likely to be ludicrous. They depend on hallucination for their philosophy. This is not a new idea and it has never worked. And finally, they offer a spurious appeal to the young, a corruption of the idea of innocence. Nothing in the world is as appealing as real innocence. But it is, by definition, a quality of childhood. People who can grow beards and make love are supposed to move from innocence to wisdom.”

As usual they got it all wrong like the nightly body count from Vietnam. We viewed that during supper time. Decades before Trump the fake news had us winning until we didn't.

The official Summer of Love ended in early October, 1967. Linda Fitzpatrick, the daughter of a wealthy spice importer from Connecticut, was found dead in a basement in the Lower East Side. I was on the sidewalk that Sunday morning when they took out  the body bags of Linda and her hippie friend Groovy. They had their heads bashed in.

The Times made a big deal of it. In an October 16 feature J. Anthony Lukas wrote in part "But for 18-year-old Linda--at least in the last 10 weeks of her life--the Village was a different scene whose ingredients included crash pads, acid trips, freaking out, psychedelic art, witches and warlocks.

"Reality in both cases went far beyond the Fitzpatricks' wildest fears--so far, in fact, that they are still unable to believe what their daughter was going through in her last weeks."

The story could have been about the girl I sent home on the bus earlier in the summer.

There were three days of love, peace and happiness August 15 to 17, 1969 at the misnomer Woodstock Festival. It actually was staged in a cow field at Max Yosgur's farm in Bethel, New York. Because of all the rain there was the stench of raw manure as we slogged about in the mud.

From the stage there were public service announcement about the acid being pedaled to 400,000 celebrants. There were pithy updates on which drugs provided a good trip and which were bummers. The primo stuff was likely Blue Cheer, Owsley's Sunshine, or Window Pane and Blotter.

Later in the Berkshires, after the festival, a few of us did some genuine Sunshine. It was so named for being packed into pellets using orange Kool-Aid.

Shango still laughs recalling me driving us back to his place in my vintage 1947 Buick. I was driving at a blistering 10 MPH as we gasped and groaned through rampaging visions.

Sitting here writing this shit, now old and straight, I can feel an acid flashback. Like wow man.

In Frisco last week the conference laid some flower power, day glo, peace beads on us in the goody bag. It also came with flowers and a groovy scarf.

On the Fourth, a couple of days ago, I wore them to the theatre.

In the lobby folks gawked at me real weird like.

It sure conjured up wicked cool memories.