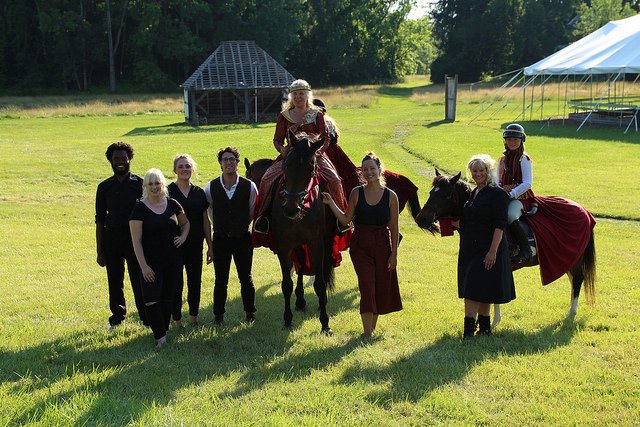 Some nights are just special.

Shakespeare & Company’s Gala 2018 was one of those nights. It was a true night to remember, due, in part to Trustee, Michael A. Miller, the guest of honor, who was publicly celebrating his 25th Anniversary at Shakespeare & Company in Lenox, Massachusetts.

Supporters and friends honored Mr. Miller for all the work he has done for the organization. The successful fundraiser netted over $400,000, a large figure that is used towards educational advances for 50,000 students annually, actor training and specialized court programs for adolescent offenders.

The evening was Miller’s. He praised, not himself, but the 40 years of distinguished work that Tina Packer and Shakespeare & Company has mastered, through determination and hard work. His words resonated with the crowd.

The lavish evening began with cocktails and small bites under the tent at The Roman Garden Theater. Silent Auction items were offered.  As more alcohol was consumed, seemingly the bids grew in each category. During the cocktail reception, David Pickard sounded his trumpet as an actor rode horseback performing scenes from Henry V.

Afterwards,  guests were escorted to the Tina Packer Playhouse where three members of the renowned Silkroad Ensemble performed their Grammy Award music in opposite parallel with actors performing Shakespearean monologues.

After the fun event there was  a gourmet dinner, catered by Kate Baldwin Food. During the seating and dinner, cast members listened to Berkshire inspired songs and poetry readings.

To top the evening off, DJ BFG, under The Roman Garden Theater tent offered dancing while desserts and drinks were being served.

It was a memorable evening.