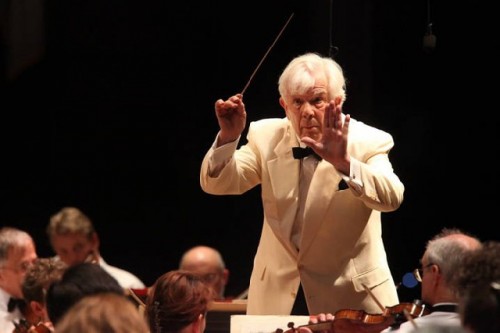 Christoph von DohnÃ¡nyi, was a Conducting Fellow at the Tanglewood Music Center in 1952. Hillary Scott photos. 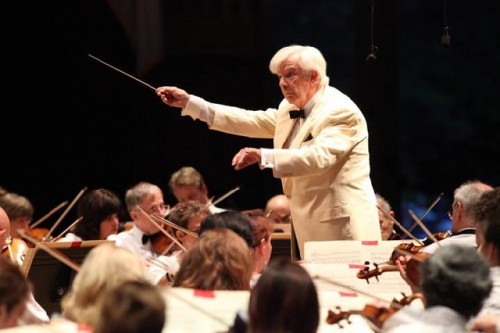 Conducting an all Beethoven program.

It was steamy in the Shed last night for the sweltering launch of the gala, 2012, 75th season of Tanglewood.

With Christoph von Dohnányi, a Conducting Fellow at the Tanglewood Music Center in 1952, the orchestra  replicated the very first BSO concert that took place  on August 5, 1937.

A capacity audience enjoyed the all-Beethoven program, opening with the Leonore Overture No. 3, followed by Symphony No. 6, Pastoral, and Symphony No. 5.

While marking the first concert of the season for the Boston Symphony Orchestra in summer long residence, in fact, Tanglewood has been off to a scorching start.

During the ever expanding shoulder, or pre and post seasons (with a rocking revamped Labor Day weekend program after the BSO breaks camp) Ozawa Hall and The Shed have already featured Yo Yo Ma’s Silk Road, and the annual visits of the Mark Morris Dance Company and a broadcast of Prairie Home Companion with Garrison Keillor.

This week we attended one of the three annual, sold out, love fests with Berkshire based musician James Taylor and perky guest Taylor Swift. Taylor will be back of July 14 and August 18 to join star studded gala evenings.

Given the dense and exciting 75th year celebration and programming it is notable that this was undertaken while the Boston Symphony Orchestra continues to search for an artistic director to replace James Levine who left two years ago. Given his many health issues there were challenges to fill gaps with guest conductors. It is a tribute to general manager Mark Volpe that Tanglewood and the BSO remained on track.

No time frame has been indicated as to when the BSO will appoint a new leader. A number of potential candidates have been discussed by critics. Perhaps one of the guest conductors this summer will surface as a long term leader for the orchestra. It will certainly be a topic of interest for critics and those who closely follow the BSO.

There is no way to underestimate the importance of a healthy and thriving Tanglewood to the cultural and financial stability of the Berkshires. Its presence and that of Jacob’s Pillow Dance have been a magnet for other cultural institutions including four major theatre companies- Shakespeare & Company now occupying a permanent campus adjacent to Tanglewood in Lenox, Barrington Stage,  Berkshire Theatre Group, and Williamstown Theatre Festival. In addition to the long established Berkshire Museum. Williams College Museum of Art and Clark Art Institute the critical mass of Tanglewood at its reactive core helped in the creation of Mass MoCA and the Norman Rockwell Museum.

The synergy of these major arts organizations and many satellites largely rely on Tangelwood as the primary engine to drive cultural tourism to the Berkshires. Expanding on the shoulder seasons has an enormous impact on the hospitality and restaurant industries which rely on strong summers to offset long slow winters.

How did this all happen?

In the winter of 1936, Mrs. Gorham Brooks and Miss Mary Aspinwall Tappan offered Tanglewood, the Tappan family estate, with its buildings and 210 acres of lawns and meadows, as a gift to Music Director Serge Koussevitzky and the Boston Symphony Orchestra. The offer was gratefully accepted, and on August 5, 1937, what was then the Berkshire Symphonic Festival’s largest crowd assembled under a tent for the first Tanglewood concert, an all-Beethoven program, which was recreated last night.

On Sunday, July 8, the Boston Pops Orchestra gives its first Tanglewood 2012 performance in a concert led by conductor Keith Lockhart featuring Broadway superstar Bernadette Peters, who has dazzled audiences with performances on stage and screen and will present selections such as Let Me Entertain You, Fever, and Some Enchanted Evening. This season we saw Peters in Sondheim’s Follies on Broadway. It will be a special treat to hear her with the full Pops orchestra.

There are many special programs throughout the season.

The renowned violinist and conductor Anne-Sophie Mutter will present an all Mozart program on Friday, July 14. On Saturday she will join the all stars for a 75th celebration.

Stars from the classical music world and beyond will join in the Tanglewood 75th celebration by taking part in two special gala concerts on July 14 and August 18.  The July 14 gala will feature the Boston Symphony, Boston Pops, and Tanglewood Music Center orchestras, with performances by Emanuel Ax, Yo-Yo Ma, Anne-Sophie Mutter, Peter Serkin, longtime Tanglewood friend James Taylor, the Tanglewood Festival Chorus, and other special guests, led by conductors John Williams, Keith Lockhart, and Andris Nelsons.  This program will be made available to a worldwide audience through a series of international broadcasts, details of which will be announced at a later date.

With so many special programs and world renowned artists Tanglewood is going all out this season. Many of the concerts are selling out so make plans now. Between now and Labor Day all paths lead to Lenox.

That’s great news for the Berkshires.