Oklahoma at the Colonial in Pittsfield 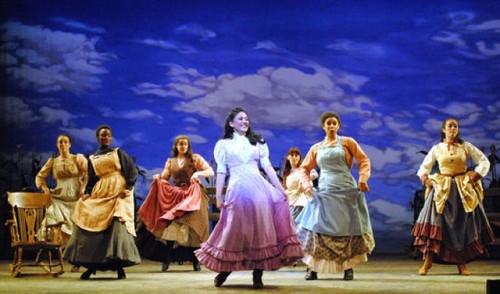 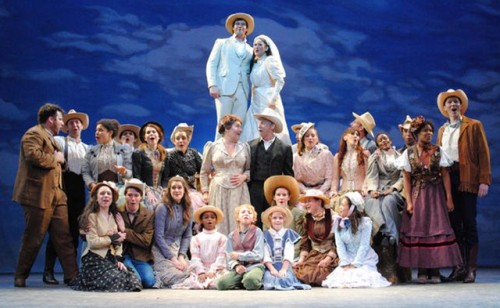 Decades before we were polarized into Blue States and Red States there was the smash Broadway musical Oklahoma by Richard Rodgers and Oscar Hammerstein.

One of the iconic musicals and Broadway hits of all time it opened in 1943 and ran for five years and two months for an astonishing 2212 performances. With its initial road company, generally just one at a time during that era, the original Broadway and road production lasted for an amazing ten years.

In the early days of long playing records it was one of the first original cast albums. In 1955 it was released as a popular film, with another LP, starring Gordon MacRae and Shirley Jones.

Circa 1953, then thirteen, my family attended the very last performance of the original touring company at the old Boston Opera House on Huntington Avenue. The spectacular vintage theater was located between Symphony Hall and the Museum of Fine Arts. That magnificent building was condemned for allegedly "weakened construction.”  It occurred under pressure from an expanding Northeastern University in 1956. Ironically, two wrecking companies failed to raze the formidable old structure. A third company, with a huge crane, managed to knock it down in 1958. On its site today is an insultingly undistinguished Northeastern structure.

That initial exposure to Oklahoma was ravishing and enduring. I vividly recall the production and magnificent choreography of Agnes deMille. I just loved the music, and still do, starting with the first notes of Curly (Jarid Faubel) declaring “Oh What a Beautiful Morning” through the entire cast belting out the anthem “Oklahoma.” The rousing finale had the audience last night clapping along with enormous enthusiasm.

As a youngster I was intrigued by the dark theme of the wretched Jud Fry (Austin Durant) who pined and lusted for the out of reach Laurey (Diane Phelan). The haunting song “Pore Jud Is Daid” still resonates with me. Am I wrong about this but I recall the cast singing it during his funeral at the end of the second act.

In this production Jud is just carted off to the morgue followed by a mock trial. With frontier justice, on the spot, Curly is vindicated while Jud doesn’t even earn a decent burial. What a distortion of true American values. There’s no way you’re going to send a nice guy to jail on his wedding night. Not just, shucks, for a misdemeanor of killing his rival in self defense. The bride seems to have no reaction to this tragedy. She just stands around looking lovely in a beautiful dress designed by David Murin.

It’s one of many reasons why its hard to like a woman with so little evidence of either passion “Many a New Day” “People Will Say We’re in Love” or compassion. It is her conniving ambivalence that sets off the tragedy that revolves so implausibly around her.

It seems odd to have such an unattractive, mean spirited character like Jud in a bright, upbeat, life affirming celebration.

It was actually that dark side and looming threat of unvarnished evil that made Oklahoma unique. It connected with audiences during a time when we were at war with fascism. This was the beginning of “book” musicals and not just a mélange of song and dance. For its era Oklahoma oozed a now superannuated gravitas.

The musical was staged during a time of national threat when the American arts rallied behind the war effort. This unvarnished, flag waving, jingoism permeated every aspect of the arts. Aaron Copland, for example, in 1944 composed Appalachian Spring a ballet for Martha Graham. Its Broadway incarnation was popularized the year before in the choreography of Agnes deMille. Authors were striving to write the Great American Novel and painters like Grant Wood “American Gothic” and Thomas Hart Benton were depicting Regionalism. Hollywood cranked out agit-prop films.

The hayseed, down home values of love struck Cornhuskers, played well as a Broadway celebration of the  Heartland. The musical has continued to be performed by schools and community theatres. Its bucolic charm and stunning song and dance are regarded as a sure thing production. With that great score just how can you go wrong?

Well, let us count the ways.

Only the wacko Tea Party and the Bible Belt continue to espouse the hopelessly outdated, simplistic, often dumb and naïve, heart on the sleeve jingoism of Oklahoma. It's an iconic musical in need of an update and revision.

In the beautifully restored Colonial Theatre the Berkshire Theatre Group is establishing a tradition of launching the season with musicals. The first two, the rock musical Tommy with Randy Harrison, and last year’s Chorus Line, were more successful with critics, in reviews which ranged from raves to measured, than boffo at the box office.

Arguably, artistic director, Kate Maguire, hedged her bets this season going all in with a populist staging of a proven hit. Berkshire audiences, however, are sophisticated and likely would respond to a more contemporary musical.

There is much to like about this production particularly the fabulous choreography of the brilliant Gerry McIntyre. He did the terrific work on Chorus Line last year. He has kept true to the original spirit of deMille but refreshed and reenergized the dance. The wonderful “Dream Ballet,” in which Laurey evokes the tragic consequences of the conflict of his suitors, is suitably stunning.

The direction of Eric Hill, however, is problematic. The individual roles are presented as more caricatures than fully developed characters. It’s a muddle to figure out just why Curly and Jud are so madly in love with the pouty, prissy Laurey who seems to be terribly miscast. Rarely have we experienced a less endearing leading lady. Her singing is sweetly adequate but not powerfully thrilling.

Often I could not comprehend her lines. This was largely the fault of over amplification in the sound design of Brendan F. Doyle. The volume was cranked up to a range that only dogs can hear. During the large ensemble numbers all that exquisite Rodgers and Hammerstein music, played with skill and energy by an eleven piece pit band, was just a screeching, hard on the ears, cacophony.

There is a difference between working the sound board during rehearsals and the acoustic adjustments before a full house. We never heard the natural tones of  unaugmented singers. When over amped this musical seemed more like listening to a CD than an actual live performance. Why bother to go to a theatre to hear canned music? The Colonial isn’t That big for an audience to hear and enjoy natural voices and instruments.

In the decades between World War II and today there is an enormous difference in the attention span of audiences. The first act, clocking at roughly 90 minutes, was way too long with numerous, slogging, slow spots. It got draggy before the curtain finally dropped. The second act, we’re glad to say, was shorter, faster and far more energetic ending in that rousing finale.

What I mostly object to is that the characters are really, really dumb.

The only smart person on stage, and one of my favorite characters and performances, was the “foreigner” the snake oil pedaling “Persian” Ali Hakim (Christopher Gurr). He seduces the farmer’s daughter, the very fine and comical Ado Annie Carnes (Chasten Harmon). She was just wonderful as the girl who sings “I Cain’t Say No.” He has his wits about him bilking cash from gullible hicks. In that sense, although a bit of a racist slur, he makes sense to a contemporary audience.

Then we have the absurd notion of the charming but stupid Will Parker, aptly played by (Matt Gibson), who can’t seem to hold onto the fifty bucks he won in Kansas City. It’s the cold cash demanded to marry Ado Annie who is also in love with Hakim. It is equally absurd that Hakim, who has no interest in marrying her, insists on buying Will’s bag of junk or ersatz presents for his lady love. Stupid Will just can’t hold onto his money. As they say a fool and his money are easily parted.

The absurdity accelerates in the second act when Jud and Curly get into a bidding war for Laurey’s picnic basket. They put up their life savings. Laurey slyly urges Curly to stop the madness. But the dumb stud  sells his saddle, horse, and six shooter just to share a picnic lunch. Ridiculous.

Maybe Okies really were that clueless back in the day.

Which got laughs from sophisticated New Yorkers on Broadway.

In 2013 Pittsfield, however, it just made me cringe.

It is a pity that Jud was cast and directed as so one dimensional. Durant is a talented actor with a superb voice and credible dance skills. But, as a bald headed, thick set man he is too obviously unattractive as a potential suitor. He is directed by Hill as an ersatz Quasimodo to Laurey’s Esmeralda. We expected him to swoop down, snatch her up, and drag her back to his smoke house den bellowing “Sanctuary, Sancutary.”

Perhaps there might have been more dramatic tension if Jud were a more handsome rival to Curly with that dark side. It would have been more interesting if Laurey was plausibly attracted to the man she clearly feared. It would have given more dimension to the scene when he recalls what he felt was a loving moment. She had brought hot soup to the ailing hired hand on her farm. Jud is fixated that she felt his brow for fever. It would have fleshed out as credible his hope to win her hand.

There were many fine moments and superb individual performances but one senses too many missed opportunities and miscues. Like the confusing set by Brett J. Banakis which can’t make up its mind between contemporary, exposing bare walls, and period style.

This Oklahoma is caught up in a design twister somewhere in the gap between the style and look of 1943 and 2013.

I just love the song and theme of “Kansas City.” While not that far from Oklahoma it’s a world apart according to Will as he relates his adventures to Aunt Eller (the superb Kristine Zbornik). It was the Kansas City run by Thomas Joseph "Boss" Pendergast (July 22, 1873 – January 26, 1945). It was the mecca for graft and sin in the Heartland. KC was the corrupt, wide open, fun loving spawning ground for Count Basie, Lester Young and Charlie Parker.

Rodgers and Hammerstein were evoking Kansas City as a sophisticated, progressive, alternative to Middle America. It was Kansas City jazz vs. Oklahoma church socials and square dancing.

While we battled the axis of evil, in the 1940s of the original Oklahoma, the musical was a homily of wholesome American values.

That was then and this, good grief, is now.