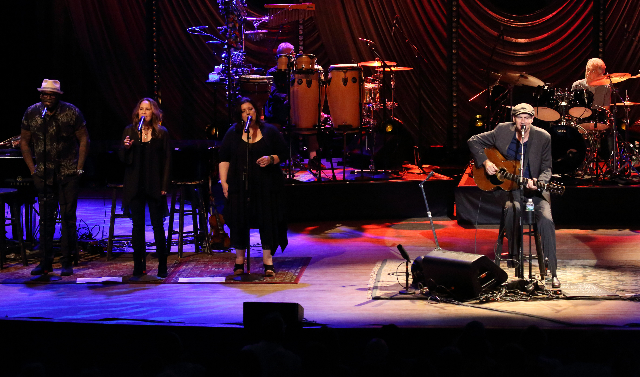 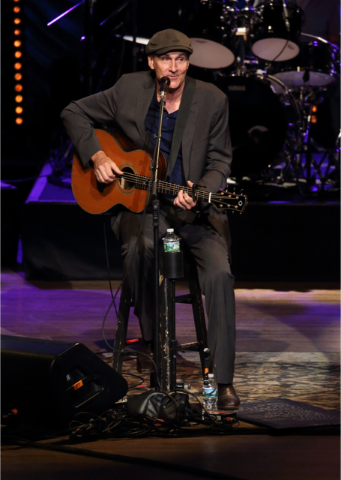 It was a clear, beautiful July 4th evening at Tanglewood when James Taylor took to the stage with his 'All Star Band.' What was different about the night was the audiences anticipation and excitement for Bonnie Raitt, who accompanied Taylor for the 17 city tour that includes a concert at fabled Fenway Park.


There is joy for the packed house of 18,000+ music lovers that have developed a relationship through the years withTaylor at Tanglewood.

The evening started with his rendition of the 'Star Spangled Banner', followed by the classic, 'Carolina On My Mind.' He had the audience in his hands as he leaned forward on the stool that accompanies him throughout the world. With an acoustic guitar in hand, Taylor wooed the audience with his classics, 'Fire and Rain' and 'Your Smiling Face.'

Taylor and his band includes guitarist Michael Landau, drummer Steve Gadd, saxophonist Lou Marini, percussionist Luis Conte. Back-up vocals featured Arnold McCuller. As with all James Taylor concerts, each musician was featured while he complimented them during their spotlit solos. Through the years generosity  has become part of his act. His personal pleasure of pleasing others, he says, has been attributed to  his wife Kim.

He said 'Thanks to Kim, I am a better person.' It is evident during the yearly concerts that hew likes to take the spotlight off of himself and let others shine. He knows when to play acoustic guitar at a slow pace or to play electric guitar with a lot of gusto.

Gusto ran high when Bonnie Raitt took the stage with her slide guitar, singing her hit song, 'Thing Called Love.' Taylor did his best to accompany her, but was no match for her deep voice and chops on electric guitar.

The evening ended as all Forth of July's do at Tanglewood with twenty minutes of fireworks at the Stockbridge Bowl. The attention of the audience shifted from the stage to the sky. Everyone had stars in their eyes as the last blast of fireworks exploded.

Talking with concertgoers, Matt Felt of Minneapolis and Ariel Dumas of Brooklyn, I learned that this July 4th event is their yearly pilgrimage to the Berkshires. It is like New Year's Eve to us-a tradition that only comes once a year. In parting, they said, if you ever talk with him and tell him that Ariel Dumas and Matt Felt 'love you.'