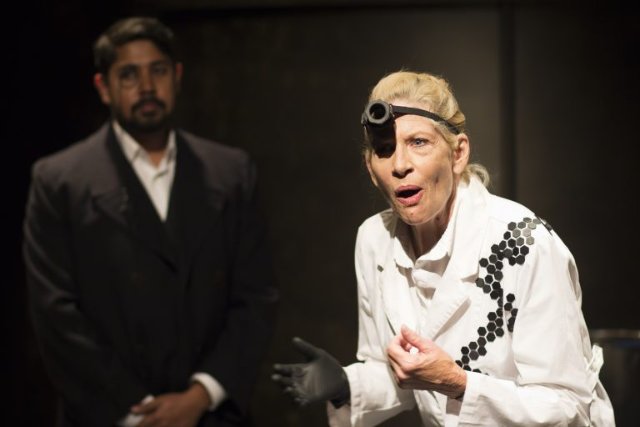 The greatest changes in the lives we lead are not produced by charismatic politicians or powerful business executives or eminent philosophers. They are produced by “little men” hunched over desks whose inspiration and perseverance produce inventions. An abiding principle of innovation has been that while technological advances may cause social displacement, on the whole, they always contribute to the greater good. But speculation that humanity’s grasp for better goods and processes may have costs that far exceed benefits probably began in the early 20th century. The atomic bombing of Hiroshima certified the greatest fears of those who feared invention’s unintended consequences.

In 1921, Czech playwright Karel Capek wrote a seminal science fiction work set in contemporary time entitled Rossum’s Universal Robots. It introduced chilling possibilities of an out-of-control future. In it was coined the very word robot (robota in Czech). Mac Rogers’s revision updates that work by a generation to include the rise of Hitler and World War II.

As in the original work, an inventor, Rossum (played by a totally button-downed Micaela Greeley), develops a robot with a human-like appearance but limited functions. The objective is that robots will replace human “drudges” in the work force and free humans to participate in more advanced activities.

As Rossum continues to improve the products, they begin to take on more human characteristics and functions – becoming what we today would consider androids. Questions begin to emerge concerning further development and dissemination – questions that resonate today. Who controls the decisions on what capabilities to add and who to distribute the robots to? What if robots replace workers who cannot be otherwise employed? What if they fall into the wrong hands? What if robots engage in immoral or illegal activities? What if they begin to take control over their own operation?

So how can these risks be managed? One characteristic ties the androids to the production line and keeps them from the junk heap. They require a serum to operate, and only Rossum knows the formula to the serum.

Director Sam Tillis makes great use of his resources. His cast of 10 actors comports itself ably as humans, and in many cases as quite convincing androids. Their depiction of the increasingly human thoughts and actions of the androids makes it all seem plausible.

Staging is simple yet effective. The only fixed set is a cheesy back wall of Art Deco design that looks like it could come from a Frankenstein or Ed Wood movie. Scenes are often played with invisible props. But the dominant black and white costumery and accessories create a striking period look, accentuated by Sara Saavedra’s detailed lighting. The active use of white light spots and floods enhances the sharp contrasts of the stage elements and creates a striking and often ominous look akin to early black and white horror and science fiction movies.

Universal Robots contains so many issues and dimensions that it will appeal to the general theater going public – not just to science fiction buffs. One could actually argue that it is too grounded in current reality to even be considered science fiction. Overall, the play maintains tension and interest throughout while generally possessing internal logic. However, the opening sequences introduce a cluster of artists who regularly meet at a restaurant with no name, and who are induced to become the promoters of the robots. Later, some clashes about artistic versus scientific appreciation of innovation are brought into focus, but the involvement of the artists in the capacity of robot advocates seems contrived. Also, the play overstays its welcome slightly. A reduction of 15-20 minutes would be welcomed, without loss of meaning.